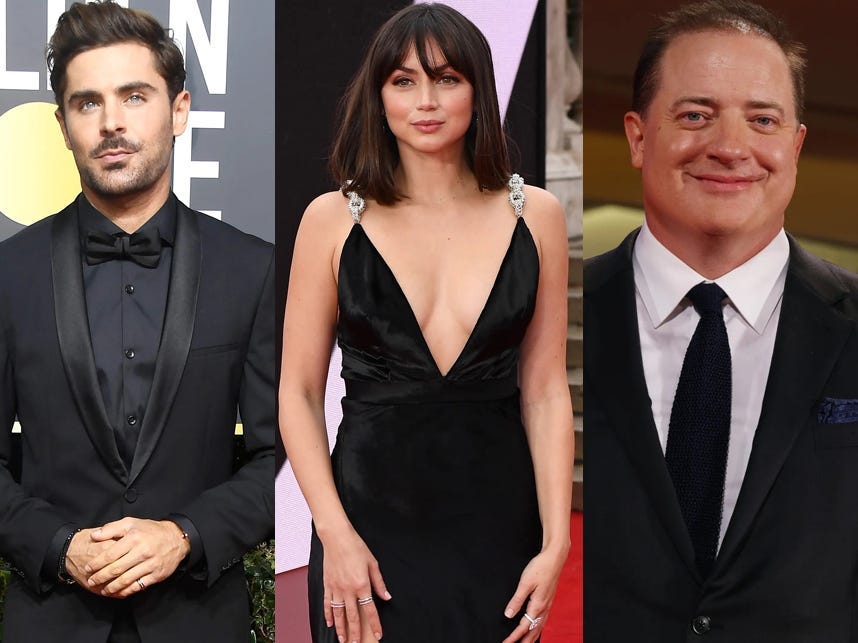 Al Pacino. Axelle/Bauer-Griffin/FilmMagic/Getty Believe it or not, there are some stars who haven't been in a Marvel franchise yet. Here we make the case for some who should get their shot. They include Ana de Armas, Zac Efron, Al Pacino, and more. Monica BarbaroMonica Barbaro. Monica Barbaro/Vivien Killilea/GettyThe star was just in the biggest movie of the year playing Phoenix in "Top Gun: Maverick. "Having brought an edge to the character and showing she can hang with her hotshot male pilot counterparts, Barbaro has proven she would fit in perfectly in any role Marvel would want to throw at her. Personally, we think it's only a matter of time before she gets cast. Austin ButlerAustin Butler. Axelle/Bauer-Griffin/Getty ImagesThe same can be said for Butler. Wowing audiences most recently as Elvis Presley in Baz Luhrmann's biopic, he has shown that he can do it all as an actor. Butler will next appear in "Dune: Part 2. " This certainly can be a showcase of how he could take hold of an upcoming Marvel franchise. Steve CarellSteve Carell. Joel C. Ryan/Invision/APDo not let his comedy work fool you; Carell can do it all. And we think it would be the wrong choice to have him come into the MCU as simply comic relief. We would want to see him play a dark role. Not necessarily the main villain of a movie or show, but a secondary role who perhaps is related somehow to the hero. We would completely buy into that. Ana de ArmasAna de Armas. Mike Marsland/Getty ImagesShe has already been impressive as a Bond girl, and we could completely see her in the MCU. De Armas plays Marilyn Monroe in the upcoming Netflix movie "Blonde. " She might soon be looking for a different challenge that's less drama and more action. Zac EfronZac Efron. Samir Hussein/Getty ImagesThe actor has been navigating his career with a slew of different kinds of roles. We would be shocked if he hasn't at least tried out for a role within the MCU. It would be great for him to show up in a Marvel movie or TV show. Brendan FraserBrendan Fraser. Cindy Ord/Getty ImagesHe has already shown up in the DC universe as Cliff Steele in "Doom Patrol" and "Titans" (he was also going to star as Firefly in the now scrapped "Batgirl" movie). So it's definitely not a stretch to think that Fraser can make his way over to Marvel. Amber MidthunderAmber Midthunder. Irvin Rivera/GettyComing off her sensational performance in "Prey," Midthunder is likely fielding a lot of offers. It would make a lot of sense for Marvel to put its sights on this star as she's already shown she isn't afraid to take on action material. Al PacinoAl Pacino. Dimitrios Kambouris/Getty ImagesThe legendary actor has tried everything except being in a Marvel project. That needs to change. Keke PalmerKeke Palmer. Jeff Spicer/Getty Images for UniversalThe star showed off a great one-two-punch recently with roles in "Lightyear" and "Nope. "It's clear to us she doesn't just have the "it" factor to take on a Marvel franchise, but the drive to make whatever she signs onto special. DeWanda WiseDeWanda Wise. Horst Galuschka/GettyComing off her scene stealing performance in "Jurassic World: Dominion," we would love to see Wise make that next step in her career by being the face of a move or TV show for Marvel. Read the original article on Insider.
Source:
insider
URL:
https://www.insider.com/marvel-actors-who-should-join-mcu-movie-tv-show-2022-9
Prev Post
Next Post