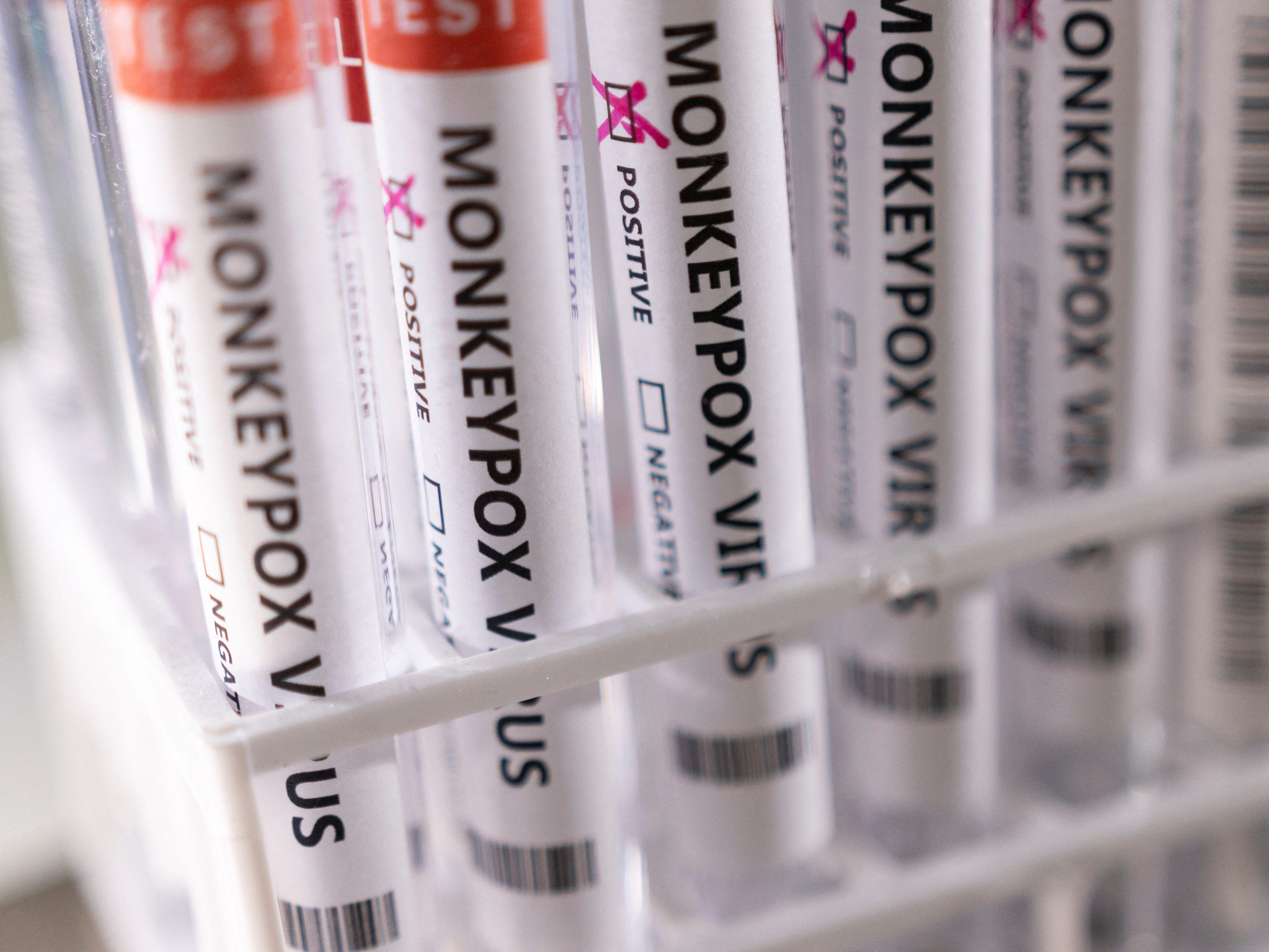 FILE IMAGE: People waiting in line for a monkeypox vaccine. Bill Clark/Getty Images A man who tested negative for monkeypox had such a bad facial rash, doctors feared he might go blind. Kevin Kwong, 33, saw multiple healthcare providers before he was treated for monkeypox. The doctor treating him said he was "shocked" by how quickly Kwong responded to the drug, TPOXX. A man who tested negative twice for monkeypox had such a bad facial rash that one doctor feared he could go blind, according to local news reports. Kevin Kwong, 33, was finally diagnosed at the University of California, San Francisco (UCSF) Medical Center in the first week of July, a couple of weeks after his symptoms first emerged. By the time he met infectious disease specialist Peter Chin-Hong, who diagnosed him, Kwong was "miserable," with hundreds of sores over his body, he told local news network KPCC. At this point, he'd attended six online appointments, rung a nurse hotline, visited an urgent treatment center, and been to ER twice, per the San Francisco Chronicle. He'd tried steroids for eczema, antivirals for herpes, and was misdiagnosed with scabies. Monkeypox can cause a progressive rash that can be confused with other conditions. "Depending on where I was with my symptoms, and who I was speaking to, I was getting different answers," Kwong said. "Each time I spoke with someone, I just got rapidly worse," he said, the Chronicle reported. "Kevin's case was probably one of the most severe cases of the patients I have seen so far," Chin-Hong, also a professor of medicine at UCSF, told KRON 4. Itchy hand that woke him from sleepKwong's symptoms started two days after he got back to California from New York in late June — with a painful, itchy, hand that woke him from sleep, according to KPCC.  He initially thought it was bad eczema and treated it with his usual steroid cream. But it got worse, progressing to his elbows, and more red spots, that leaked fluid, appeared on his face.  "Your body is being taken over by this thing that you don't understand. And you have nowhere to go, so it's both painful and terrifying," Kwong told the Chronicle. In the US, 8,934 monkeypox cases have been confirmed since an unusual outbreak started in May in countries where the disease wasn't typically reported. New York and California have the highest number of cases, mostly in men who have sex with men but anyone can catch it, regardless of sexuality. Experts think monkeypox is spreading by direct or intimate contact with an infected person, or contaminated objects.  Kwong told KPCC that he believes he contracted it from a sexual encounter during New York pride.  Monkeypox is underdiagnosedUK HSADr. Graham Walker, an emergency physician in San Francisco, told Insider that he'd seen patients, like Kwong, whose monkeypox was "missed. "This is in part because monkeypox isn't behaving like "textbook" monkeypox presentations of the past, but also clinicians may not have treated it. "I didn't realize how little information was also given to providers and how unprepared they were," Kwong said.  Even Dr. Timothy Brewer, a professor of medicine and epidemiology at UCLA who intermittently worked in countries where monkeypox was historically endemic, told the SF Chronicle that he hadn't treated a case. "Before this current outbreak, monkeypox was a very unusual disease," he said. Kwong's false negative tests made diagnosis more challenging.  "It's very difficult as a clinician to really get a good sample in these kinds of lesions because the patient is often in pain," Chin-Hong said. The CDC recommends clinicians swab lesions twice, and take samples from multiple body parts, or from lesions that look different. Quick recovery after treatment with TPOXX Chin-Hong treated Kwong with Tecovirimat or "TPOXX"— a smallpox tablet that can be used for monkeypox with CDC permission. Kwong said his facial rash improved from day one, and after two weeks he was recovered, aside from scarring. "I was shocked by how fast Kevin improved," Chin-Hong told KPCC. Read the original article on Insider.
Source:
insider
URL:
https://www.insider.com/monkeypox-patients-test-symptoms-doctors-blind-2022-8
Prev Post
Next Post