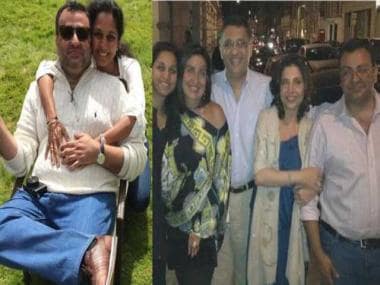 New Delhi: Supriya Sule, Member of Parliament from Maharashtra and daughter of Sharad Pawar shared pictures with former Tata Sons chairman Cyrus Mistry who was cremated on Tuesday in Mumbai. Sule said she “still can’t believe” that Mistry is no more. Cyrus Mistry died in a car crash on Sunday in Palghar district of Maharashtra. “Adore you. . Still can’t believe it. We will forever miss you. Rest in peace Cyrus,” the Nationalist Congress Party (NCP) MP Supriya Sule said.  View this post on Instagram A post shared by Supriya Sule (@supriyasule)Supriya Sule: Cyrus Mistry and I were twin, had lot of common habitsSule recalled her almost three decades of friendship with Mistry and said that he always kept a low profile and relished Maharashtrian food. On Sunday, minutes after the news of the road accident was widely reported, Sule tweeted: "Devastating News My Brother Cyrus Mistry passed away. Can’t believe it. Rest in Peace Cyrus. "Calling Mistry her twin, Sule on Monday said she has been devastated by his death. "My husband Sadanand and daughter Revati were scheduled to meet Cyrus and his wife in London on September 12 but fate had other plans," news agency PTI quoted the NCP leader as saying. Talking about Mistry, Sule said he kept a low profile and loved Maharashtrian food. "He loved thecha, a vegetarian Maharashtrian food preparation made by crushing together green or red chilies, salt and garlic, oil/ghee and cloves. Prawn curry was another favourite. Maybe he had a Maharashtrian soul in him," she added. "He was very simple and very, very humble. God's human being," she added. Sule said, "We were like twins as we had a lot of common habits. We always talked on the phone while eating. This habit irked his wife Rohiqa who used to point out that it was rude to eat and talk at the same time. ”The NCP MP said that Mistry hated being photographed, flashlights and any sort of attention. "He was always punctual and valued time and people. He had all the good qualities of leadership and management. He read a lot of books, was very respectful and soft-spoken," she added. Sule had tweeted another picture and wrote: "Gone from our sight, but never from our hearts. "Gone from our sight, but never from our hearts. Rest in Peace Cyrus ???????? pic. twitter. com/4f2FF40BTu— Supriya Sule (@supriya_sule) September 5, 2022Lost two friends: Supriya SuleIn an exclusive interview with CNN-News18, the NCP MP said that she has lost two friends - Cyrus Mistry and Jahangir Binshah Pandole. Pandole is the second person who died in the accident on Sunday in Palghar district of Maharashtra. They were travelling from Ahmedabad to Mumbai when the accident occurred around 3:15 pm on the bridge on the Surya river. "It is absolutely devastating. We have lost two friends, Jahangir, as well as our friend Cyrus. We have lost very very close friends who were like family to all of us, the Pandoles and the Mistrys," Sule said. She expressed her disbelief over the accident and said efforts were on to bring back the other two passengers - Anahita Pandole alongside her husband Darius Pandole who were rushed to a hospital after the road rage. "I can't even believe something like this has happened. Two more people in the car are hurt and we are coordinating on how to bring them back and to make sure they are okay. But it is devastating and a personal loss for Sadanand and me," Sule said. In 2012, Mistry was named Tata Sons chairman. His sudden ouster in 2016 triggered a very public, years-long courtroom and boardroom battle between Mistrys and Tatas. Cyrus Mistry is survived by his wife Rohiqa and their two sons. With inputs from agenciesRead all the Latest News, Trending News, Cricket News, Bollywood News, India News and Entertainment News here. Follow us on Facebook, Twitter and Instagram. .
Source:
firstpost
URL:
https://www.firstpost.com/india/adore-you-maharashtra-mp-supriya-sules-endearing-post-for-cyrus-mistry-11196671.html
Prev Post
Next Post