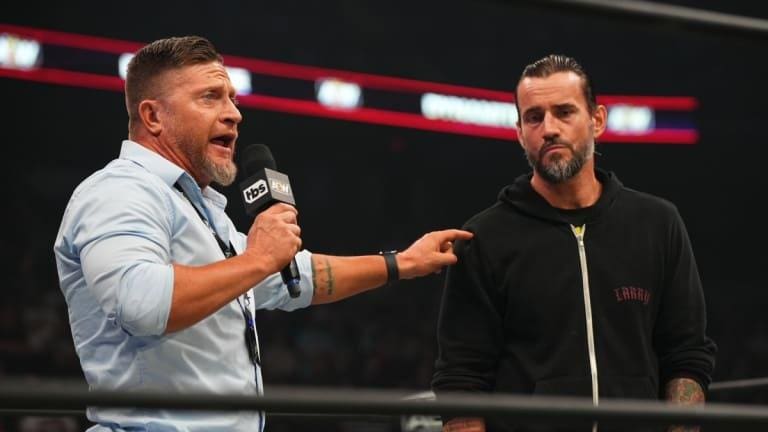 SportsMoney AEW Dynamite Ratings Stay Over 1 Million Amid CM Punk Drama Alfred Konuwa Contributor Opinions expressed by Forbes Contributors are their own. I write about men in tights and the money they make for men in suits. Following New! Follow this author to stay notified about their latest stories. Got it! Sep 8, 2022, 04:15pm EDT | New! Click on the conversation bubble to join the conversation Got it! Share to Facebook Share to Twitter Share to Linkedin CM Punk, Ace Steel, The Young Bucks and The Elite did not fly to Buffalo for AEW Dynamite. Credit: AEW AEW garnered 1. 035 million viewers, up 1. 5% from last week’s 1. 020 million for the AEW All Out go home show. Dynamite did a 0. 38 in the 18-49 demographic, which is up from 0. 35. AEW Dynamite was No. 2 on cable for Wednesday night. CM Punk, The Young Bucks and Kenny Omega were all off AEW Dynamite, forcing Jon Moxley and Chris Jericho to appear in Buffalo to boost the star power for a pivotal show. AEW Dynamite was the first television broadcast since the all out brawl backstage at the NOW Arena following CM Punk’s explosive shoot promo at the AEW Media Scrum. Various versions of the story have flown around since All Out, with the most consistent accounts suggesting CM Punk threw the first punch and Ace Steel hit Nick Jackson in the eye with a chair. Though AEW Dynamite figured to benefit from an AEW All Out bounce, this week’s AEW Dynamite ratings were also telling of the extent to which AEW’s backstage drama—which was all exclusively online—affected its television audience. “If you ever wanted a true test of what the internet can add to a professional wrestling television audience—Wednesday for AEW will be the real test. Remember. . . all of this drama was streamed. There's no promos, there's no TV—nothing. It's literally all backstage,” wrote wrestling researcher Derek Sabato. MORE FOR YOU WWE Extreme Rules 2021 Results: Winners, News And Notes As Roman Reigns Beats The Demon The World’s Highest-Paid Soccer Players 2021: Manchester United’s Cristiano Ronaldo Reclaims Top Spot From PSG’s Lionel Messi The Good, Bad And Ugly From The Green Bay Packers’ Win Over The San Francisco 49ers Though AEW stayed over one million viewers for a third consecutive week, the number was in between what it had done last week (1. 020 million) and the week prior (1. 049 million). It may not be fair to say that AEW’s backstage interest garnered zero interest, but it certainly didn’t seem to lead to a massive bump on television outside of the pay-per-view bounce. AEW Dynamite Ratings | Fallout from CM Punk Brawl AEW Dynamite Total Viewership: 1. 035 million AEW Dynamite 18-49 Rating: 0. 38 Though Tony Khan opened the show to vacate the AEW World Championship and the AEW Trios Championships, Khan made no mention of CM Punk or The Elite throughout the two-hour broadcast, nor did anybody else. Even reality-baiting MJF made no mention of the backstage fracas past a veiled reference of AEW needing more leadership, and Max Caster’s typically edgy rap was stifled before it started thanks to Shane Swerve Strickland. AEW Dynamite served to pick up the pieces from its detrimental backstage brawl between its top star and its top executives. Instead of focusing on an increasingly volatile situation, AEW was deliberate in its attempt to restore morale in its toxic locker room. Jon Moxley set the tone with a rah-rah promo in support of AEW, as the AEW Tournament of Champions winner may come down to who can cut the best “we are AEW” promo. Given CM Punk’s two turbulent reigns as AEW world champion—both of which ended without a single successful title defense—it’s imperative that AEW’s next world champion is a company man. Possibly hurting AEW’s number was an unconventional main event between two up-and-coming stars for the vapid ROH Pure Championship. Fans were clearly unfamiliar with the rules of the Pure Championship (i. e. limited rope breaks, no closed-fist punches, etc. ), and while Garcia and Yuta both have bright futures, they are not needle-movers for television ratings at this point. With buzz surrounding AEW’s backstage issues sure to die down over the next few weeks, AEW’s focus will shift toward maintaining steady ratings with four of its top stars out indefinitely. Follow me on Twitter or LinkedIn . Check out my website or some of my other work here . Alfred Konuwa Editorial Standards Print Reprints & Permissions.
Source:
forbes
URL:
https://www.forbes.com/sites/alfredkonuwa/2022/09/08/aew-dynamite-ratings-stay-over-1-million-amid-cm-punk-drama/
Prev Post
Next Post