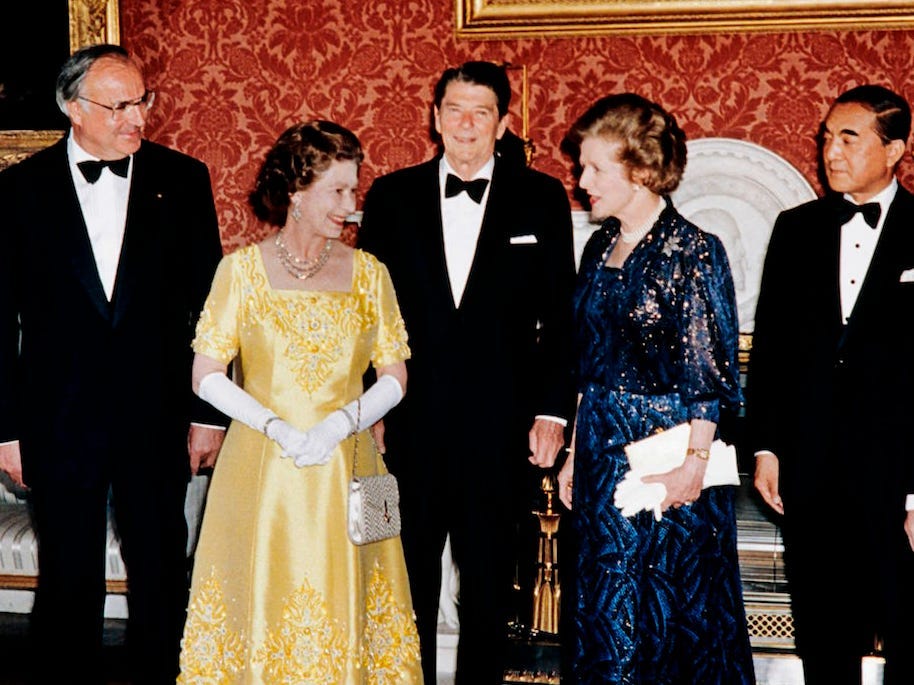 Queen Elizabeth II poses on September 6, 1984 at Buckingham Palace with (from L to R) French President François Mitterrand, Japanese Prime Minister Yasuhiro Nakasone, British Prime Minister Margaret Thatcher, US President Ronald Reagan, Chancellor Helmut Kohl of West Germany, and Italian Prime Minister Bettino Craxi. DOMINIQUE FAGET/AFP/Getty Images Queen Elizabeth II has died aged 96, after 70 years on the throne. The monarch saw 16 British prime ministers and 14 US presidents serve during her reign. Insider has put together a timeline showing the scale of her tenure alongside other world leaders. After 70 years on the throne, Queen Elizabeth II is dead. The late British monarch lived through an extraordinary amount in her life: The rise of Hitler and the Second World War, the entirety of the Cold War, the Cuban Missile Crisis and the fall of the Berlin Wall, the invention of the internet, the dawn of the information age, and the growing threat of climate change. While on the throne, the Queen saw 16 prime ministers serve Britain, from Winston Churchill to the newly chosen Liz Truss. With each she maintained a "special relationship," holding private audiences for them on a regular basis. Queen Elizabeth and Winston Churchill in 1953. Central Press/Getty ImagesHarold Wilson was said to be one of her favorites — he reportedly kept a photo of the two of them in his wallet. In the BBC documentary "Monarchy: The Royal Family at Work" Tony Blair, who served as prime minster from 1997 to 2007, said there was nothing he couldn't say to her. "The one thing you know is that she will never divulge anything to anyone," he added. But others were perhaps a bit more complicated. Her relationship with Thatcher, documented in-depth in season 4 of "The Crown", was said to have been more difficult than previous prime ministers. Queen Elizabeth II pictured alongside her mother, former US President Jimmy Carter, and Italian Prime Minister Giulio Andreotti at Buckingham Palace in 1977. PA Images via Getty ImagesThe Queen held relationships with various world leaders, particularly the US, Russia, Germany, and France. She met with 12 US presidents at both Buckingham Palace and the White House. She had a close relationship with President Dwight Eisenhower, who hosted her on her first official visit to the US as Queen. Famously, she wrote him a letter sharing her very own recipe for drop scones. The Queen lived through the Kennedy assassination and spoke about Britain's admiration for JFK during a memorial unveiling for him in 1965. Queen Elizabeth II and Prince Philip pictured with President John F. Kennedy and First Lady Jackie Kennedy on June 5, 1961. SeM / Contributor / Getty ImagesIn 1989, she accepted an invitation from Mikhail S. Gorbachev to visit Russia, the first time a British monarch had done so since 1917, Reuters reported at the time. His modern successor, Vladimir Putin, was extended a royal invitation for a state visit in 2003. She also met many spouses of world leaders. France's former president Charles de Gau lle and his wife Yvonne were both invited to see her in 1960 — an honor extended President Joe Biden and First Lady Jill Biden in June 2021. When she was able, the Queen often traveled to meet world leaders on their turf. In 2015 she made her last state visit to Germany, meeting then-Chancellor Angela Merkel. Her first visit to the country took place back in 1965, according to the BBC, when she enjoyed a lunch with West German Chancellor Ludwig Erhard. Insider has put together a timeline showing the scale of her life and reign, and the era-defining leaders whose tenures she outlasted:!function(){"use strict";window. addEventListener("message",(function(e){if(void 0!==e. data["datawrapper-height"]){var t=document. querySelectorAll("iframe");for(var a in e. data["datawrapper-height"])for(var r=0;rRead the original article on Insider.
Source:
insider
URL:
https://www.insider.com/world-leaders-queen-elizabeth-reign-outlasted-timeline-2022-9
Prev Post
Next Post