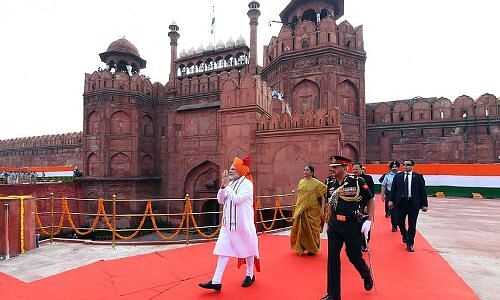 NEW DELHI: The 15th of August is just a few hours away. A sense of mixed feeling, including pessimism, has dawned on the Naga people and sections of public leaders, civil societies and also 'well wishers' of the valiant community in the Northeast longing for a lasting peace. Amid these, all eyes are on Prime Minister Narendra Modi's Independence Day speech from the ramparts of Red Fort on Monday morning. The 'delay malady' to arrive at a solution continues and the solution to the 25-year peace negotiations that was launched in 1997 now remains elusive. More importantly, the August 15 deadline, as suggested in more ways than one including by BJP leaders, is now knocking at the doors; but nobody is sure what is at the end of the tunnel. Yet, some Naga leaders and representatives of civil societies have not given up hopes. Matching their confidence and trust, reportedly the Government of India has assured some 'genuine and committed' peace workers among Naga leaders that things would be 'workable' and a solution to the long-pending Naga problem is therefore not far off. Some civil society Naga leaders have got in touch with the Government of India and they have been counselled not to give up 'optimism'. "Nagas are fighters and brave and hence, let us not give up the sense of optimism. Let's wait for brighter things," one informed source said. A public rally was organized on August 5 in Dimapur where various social organizations, including village elders' body (Gaon Burrah Federation) and community leaders pressed for a solution "at the earliest". The official stance of the Central Government is that issues of Naga Flag and a separate Constitution were not on the agenda and cannot be negotiated. The formal talks were over in October 2019, but no substantial progress could be made because the NSCN-IM and its leader Thuingaleng Muivah have raised the bogies of Flag and Constitution as 'afterthought'. On Sunday, August 14, NSCN-IM leader Muivah stated in his statement that "The Ball is in the court of Government of India to make the right move, and went on to add: "We see no meaning in the ceasefire that does not embark upon political negotiation. We see no meaning in negotiation if it does not deliver solution. " Muivah referred to the August 3, 2015 Framework Agreement inked by him and the then negotiator RN Ravi (currently the Tamil Nadu Governor), and said: "We have endured 25 years of gruelling ceasefire. . . We have also waited patiently for seven long years (since 2015)". Muivah's strategy has been to put the ball in the Government of India's court; but those in the know of things in Delhi maintain that the fact is the hardline posturing on Flag and a separate Constitution have stalled the peace process. Sources in Delhi are, however, optimistic that a solution to the Naga problem is 'workable'. But another source claimed there has been 'no formal or informal channels' between the Government of India and NSCN-IM for the last 90 days or so. "We are trying to connect the dots. To make a garland you need the finer work at the last moment," the source said. But for its part, the pro-early solution, NNPG - an umbrella organization of seven militant groups - in their August 14 (Naga Independence Day statement) said - "History will remember who wasted 25 years in fruitless parleys amassing wealth and enriching themselves. " The remarks were targeted at the NSCN-IM role for the 'delay' in arriving at a solution. ". . . Many Naga leaders have become self-worshippers and too slippery in their utterances, unable to define the real meaning of Sovereignty, Independence, Integration or Naga identity," NNPG convener N Kitovi Zhimomi said. The NNPG leader is also critical of NSCN-IM move to raise the demands for Flag and a separate Constitution months after August 3, 2015 Framework Agreement. "Apparently, since the Govermnment of India started negotiations with NNPG, the sudden demand and claim for Flag and Constitution became necessary (allegedly for NSCN-IM) in order to prolong and sabotage possible Indo-Naga solution," Kitovi said. He also made a veiled reference to NSCN-IM's alleged communist tilt as the militant organization had enlisted support and training from China in the 1980s. "Till date, the details of Framework Agreement have been kept away from the Naga people. The bits and pieces which have come into the public domain points to hegemonic, despotic and diabolic agenda straight out of the communist rule book," Kitovi said. The Government agencies are treading the path cautiously. Politically, the BJP took a decision last month making a 'sacrifice' and agreed for a 20:40 seat share in favour of regional partner NDPP. Incumbent Nagaland Chief Minister Neiphiu Rio is the NDPP leader and reportedly he has been asked to exert influence on the NSCN-IM to come forward for talks 'practically' and ink a solution and final peace pact at the earliest. As such this year's August 15 deadline for a solution pact was indicated among others by Nagaland Deputy Chief Minister Y Patton. Time is also running out for BJP as it had promised 'Election for Solution' in 2018 and now elections are due in the State in February, 2023. (IANS) Also Read: PM Narendra Modi felicitates Commonwealth Games contingentAlso Watch: Assam: Major Boost For War Against Drugs, Cops Seize Huge Drugs Consignment.
Source:
sentinel
URL:
https://www.sentinelassam.com/north-east-india-news/nagaland-news/amid-stalled-naga-talks-all-eyes-on-pm-narendra-modis-independence-day-speech-607593
Prev Post
Next Post