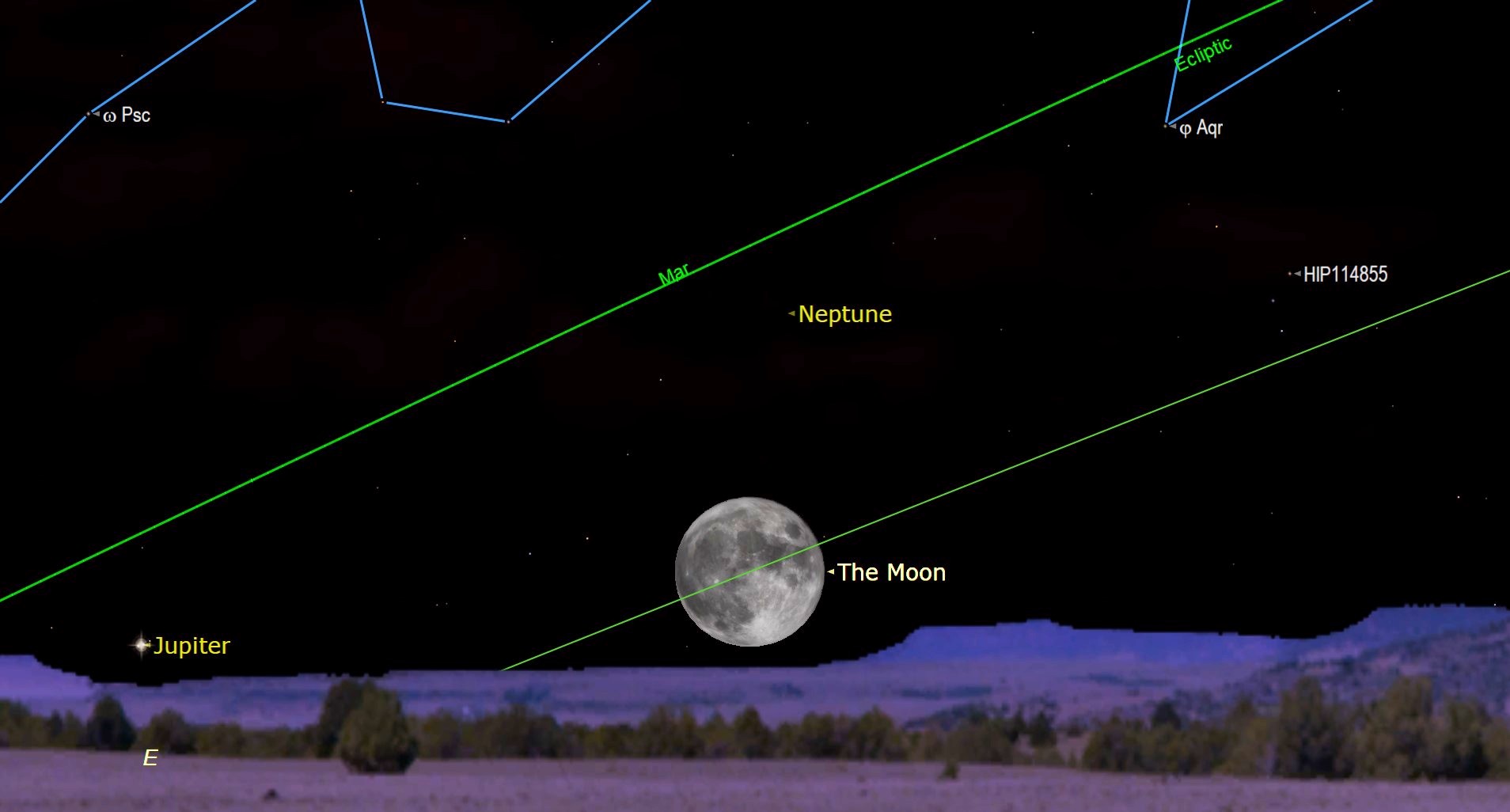 You don't want to miss the moon this weekend. The full moon of Saturday (Sept. 10) also carries the title of the Harvest Moon for those living in the Northern Hemisphere. The moon officially turns full when it reaches that spot in the sky opposite (180º) to the sun in the sky. This moment will occur on Saturday at 5:59 a. m. Eastern Time (0959 GMT). Saturday's full moon is the one that comes the closest to the September equinox, so this year it falls in September, although on occasion this title can be bestowed upon the October full moon. The 2022 version of the Harvest Moon comes unusually early, although it can occur as early as Sept. 8 (as in 2014) or as late as Oct. 7 (as in 1987). Related: Night sky, September 2022: What you can see tonight [maps] Many think that the Harvest Moon remains in the night sky longer than any of the other full moons we see during the year, but that is not so. What sets Saturday's full moon apart from the others is that farmers at the climax of the current harvest season can work late into the night by the moon's light. It rises about the time the sun sets, but more importantly, at this time of year, instead of rising its normal average 50 minutes later each day, the moon seems to rise at nearly the same time each night. Below we've provided some examples for ten North American cities. The local moonrise times for September 9, 10 and 11 are provided, with the middle date being that of the Harvest Full Moon. In actuality, over this three-night interval for our relatively small sampling, the rising of the moon comes, on average, just over 25 minutes later each night — or exactly one-half of the normal 50 minutes. A quick study of the table shows that the night-to-night difference is greatest for the more southerly locations (Miami, located at near latitude 26ºN. , sees moonrise come an average of just under 36 minutes later). Meanwhile, the difference is less at more northerly locations (at Edmonton, Alberta, located at latitude 53. 6ºN, the average difference is only 12 minutes). The reason for this seasonal circumstance is that the moon appears to move along the ecliptic and at this time of year when rising, the ecliptic makes its smallest angle with respect to the horizon for those living in the Northern Hemisphere. Looking for a telescope to see the full Harvest Moon? We recommend the Celestron Astro Fi 102 (opens in new tab) as the top pick in our best beginner's telescope guide . In contrast, for those living in the Southern Hemisphere, the ecliptic at this time of year appears to stand almost perpendicular (at nearly a right angle) to the eastern horizon. As such, the difference for the time of moonrise exceeds the average of 50 minutes per night. At Melbourne, Australia, for instance, the night-to-night difference amounts to 72 minutes. Interestingly, for those who live near 60º north latitude, the moon does indeed appear to rise at the same time each night around the time of the Harvest Moon. And for those who live even farther to the north, a paradox: the moon appears to rise earlier! At Reykjavik, Iceland (latitude 64. 2ºN), for instance, the times of moonrise on Sept. 9, 10 and 11 will be, respectively, 8:51 p. m. , 8:43 p. m. and 8:36 p. m. So, from Reykjavik, the moon will seem to rise nearly eight minutes earlier each night. You can check out our guides for the best binoculars and the best telescopes to spot the Harvest Moon. If you're hoping to capture a good photo of the moon, check out our recommendations for the best cameras for astrophotography and best lenses for astrophotography . Editor's Note: If you snap a photo of the Harvest Moon and would like to share it with Space. com's readers, send your photo(s), comments, and your name and location to [email protected] com. Joe Rao serves as an instructor and guest lecturer at New York's Hayden Planetarium (opens in new tab) . He writes about astronomy for Natural History magazine (opens in new tab) , the Farmers' Almanac (opens in new tab) and other publications. Follow us on Twitter @Spacedotcom (opens in new tab) and on Facebook (opens in new tab).
Source:
space
URL:
https://www.space.com/early-harvest-full-moon-sept-10-22/
Prev Post
Next Post