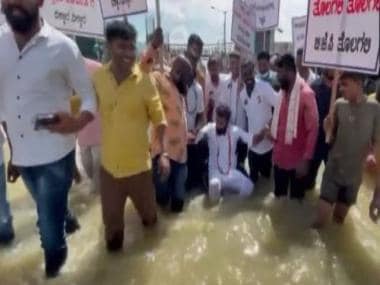 Bengaluru: Karnataka Pradesh Youth Congress Committee president Mohammed Haris Nalapad on Tuesday floated using an inflated rubber-tube on a waterlogged road here to protest against the state government demanding a solution to severe waterlogging in the city. #WATCH | Mohammed Haris Nalapad, President, Karnataka Pradesh Youth Congress Committee floats using an inflated rubber tube on a waterlogged road in #Bengaluru to protest against the state govt demanding a solution to severe waterlogging witnessed in the city pic. twitter. com/IF8DdmNa55— ANI (@ANI) September 6, 2022Meanwhile, hitting back at Karnataka Chief Minister for blaming previous Congress governments’ ‘maladministration’ for Bengaluru’s rain woes, party’s state president D K Shivakumar on Tuesday urged Basvaraj Bommai and his administration to perform or face election. He also alleged that the “corrupt” BJP government and its officials were responsible for Bengaluru’s current situation. “If there were encroachments during the Congress tenure, let them (BJP) clear it, they had earlier got five years’ time, they had now got five years, they should have done it…not performing while in power and blaming previous Congress governments instead is not right,” Shivakumar said, reacting to the Chief Minister’s statement. Speaking to reporters here, he said, such a situation had never arisen during the Congress’ tenure. “It is because of your corruption and corruption by your officials. The Chief Minister has to bear this in mind. People have given you an opportunity. In case you are not able to perform, let’s go for election,” he added. Bommai, earlier on Tuesday, had blamed the previous Congress governments’ ‘maladministration’, and unprecedented rains in the capital city, for the deluge. The Chief Minister had accused the Congress of giving permission for construction activities “right-left-centre” in the lake areas, on the tank bunds and buffer zones, during its regime. The state Congress led by its Working President Ramalinga Reddy, Leader of Opposition in Legislative council B K Hariprasad held a protest against the BJP government accusing it of neglecting Bengaluru’s infrastructure leading to the current situation and blamed it for “bringing down the pride” of the city, stating that several IT and BT industries were planning to shift to other cities. Dr Geeta Agnihotri, Scientist, Meteorological Department said, “Today’s rainfall report for Bengaluru is: Electronic City-8 cms, City office-4 cms, International airport-9. 6 mm & HAL airport-5 cms. Heavy rain for next 2-3 days in Bengaluru, yellow alert was issued for today. ”She added, “Widespread rains for next 5 days in coastal and North interior Karnataka, 3 days widespread rains followed by fairly widespread rains in the next 2 days in South interior Karnataka. ”Read all the Latest News, Trending News, Cricket News, Bollywood News, India News and Entertainment News here. Follow us on Facebook, Twitter and Instagram. .
Source:
firstpost
URL:
https://www.firstpost.com/india/bengaluru-rains-karnataka-youth-congress-leader-floats-on-waterlogged-road-11196991.html
Prev Post
Next Post