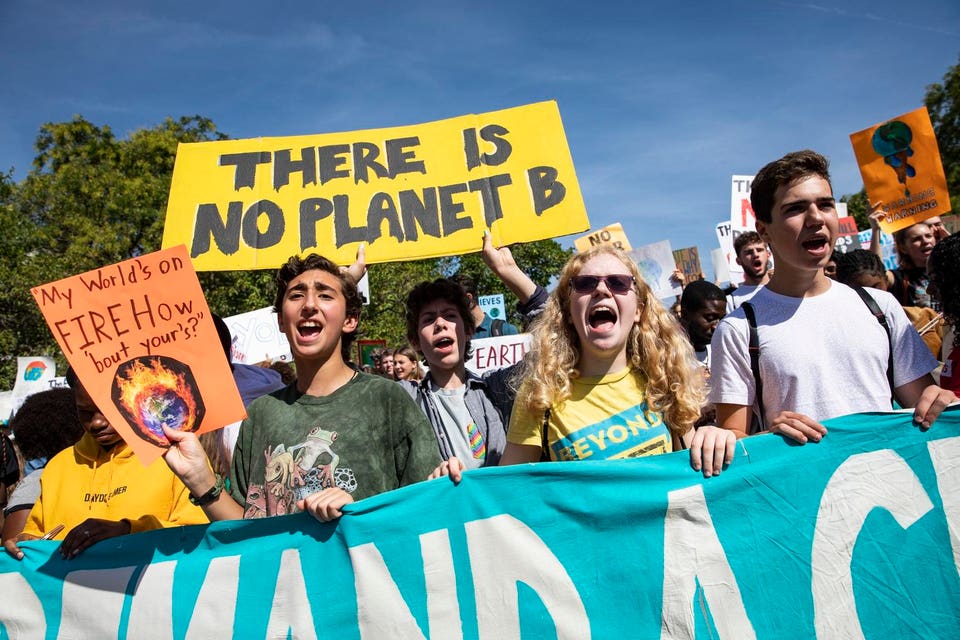 ForbesWomen Businesses Voice Support For Climate Action In The Inflation Reduction Act Joan Michelson Contributor Opinions expressed by Forbes Contributors are their own. I cover energy, climate, sustainability, & ESG and women's careers New! Follow this author to stay notified about their latest stories. Got it! Aug 9, 2022, 06:40pm EDT | New! Click on the conversation bubble to join the conversation Got it! Share to Facebook Share to Twitter Share to Linkedin Activists gather for the Global Climate Strike protests on September 20, 2019 in Washington, In what . . . [+] could be the largest climate protest in history (Photo by Samuel Corum/Getty Images) Getty Images Top leaders in the business community that see the imminent risks of climate change are weighing in on the marathon weekend passage by the Senate of the Inflation Reduction Act because of its provisions to address climate change. General Motors Chairman and CEO Mary Barra announces a $300 million investment in the GM Orion . . . [+] Assembly Plant plant for electric and self-driving vehicles at the Orion Assembly Plant on March 22, 2019 (Photo by Bill Pugliano/Getty Images) Getty Images In an exclusive interview today on Electric Ladies Podcast (to be broadcast at a later date), General Motors Chief Sustainability Officer, Kristen Siemen said, “W e really support the provisions that are going to accelerate the adoption of electric vehicles and strengthen American manufacturing and jobs. The consumer EV purchase incentives for new used and commercial EVs are very important, the production tax credits to support the domestic critical mineral processing and EV production, and then even the grants to support the transition of our facilities. ” GM CEO Mary Barra announced previously that the company will phase out gas and light-duty diesel vehicles and only manufacture electric vehicles by 2035 . Siemen added that “GM has been involved in electric vehicles, many people don't realize, for over 25 years, back with the original EV One. ” She said GM “committed over $35 billion in investment in EVs and AVS by 2025,” and that they are on the way there, “transitioning our manufacturing facilities. We'll have over 50% of our facilities producing EVs here in the U. S. by 2025. We've announced four battery plants here in the U. S. , a number of supply chain agreements, again, to really get those critical minerals happening here. So, so really excited to see where this, this is going to take us. ” MORE FOR YOU Spring Health Notches A $190 Million Series C At A $2 Billion Valuation, Making CEO April Koh The Youngest Woman To Run A Unicorn A Year After Unleashing War Crimes Against Indigenous Armenians, Azerbaijan’s Threats And Violations Continue The Secret To Being The Wildly Popular Mayor Of Miami? Surround Yourself With Amazing Latina Women COP26 UN Climate Change Conference at the Scottish Event Campus (SEC) in Glasgow, Scotland, on . . . [+] October 31, 2021. (Photo by ALAIN JOCARD/AFP via Getty Images) AFP via Getty Images The business community has been pushing aggressively for climate-related legislation for months, many for years. Last November, at the UN climate conference known as COP26 for example, 450 financial institutions representing $130 trillion in assets announced a massive commitment to transition the economy to net zero with the announcement of the Glasgow Financial Alliance For Net Zero . In addition, the Securities and Exchange Commission’s recently proposed climate risk disclosure rules are in response to demands from the investment community for more consistent, comparable and reliable financial data from companies about the risks their businesses face from climate change. Screenshot of SEC Climate disclosure rules factsheet Screenshot of SEC Climate disclosure rules factsheet Kristina Wyatt, who just finished a one-year term at the Securities and Exchange Commission heading the task force developing its proposed climate risk disclosure rules – as Senior Council for Climate and ESG to the Director of the Division of Corporate Finance at the SEC and is now Senior Vice President of Global Regulatory Climate Disclosure and Deputy General Counsel at Persefoni – explained on Electric Ladies Podcast (to be broadcast in September) that they were pushed by investors to act. “Investors are saying that they need more information to help inform their investment decisions so that they can properly incorporate climate related risks into those investment decisions…. Investors were saying, look, the information that we're getting just doesn't cut it, it, it's not sufficiently clear, consistent, comparable, reliable. We need more. And we need the SEC to step in and provide clearer guidance, clearer rules to help ensure that investors are getting the information that they need. ” Last December, a group of 437 companies, investors, trade groups, and employers, 397 of which were businesses, sent a letter to members of Congress advocating “for the ‘swift enactment’ of the historic climate investments in the Build Back Better Act. ” Many of those provisions are in the Inflation Reduction Act. Anne Kelly, VP of Government Relations, Ceres Ceres. org Ceres, the nonprofit that works with the business community on sustainability and clean energy challenges, released a statement of support for the Inflation Reduction Act, as they have for all the IRA’s predecessor bills as these initiatives moved through the legislative process. In the last incarnation of the bill, Ceres Vice President of Government Relations Anne Kelly told Electric Ladies Podcast that, “It deals with four interwoven challenges…The first is the post-pandemic reality, the second is the economic downturn, the third is the climate crisis, and the fourth is inequality and racial equity… The general theme is that the road to economic recovery is through climate action. ” Follow me on Twitter or LinkedIn . Check out my website . Joan Michelson Editorial Standards Print Reprints & Permissions.
Source:
forbes
URL:
https://www.forbes.com/sites/joanmichelson2/2022/08/09/businesses-voice-support-for-climate-action-in-the-inflation-reduction-act/
Prev Post
Next Post