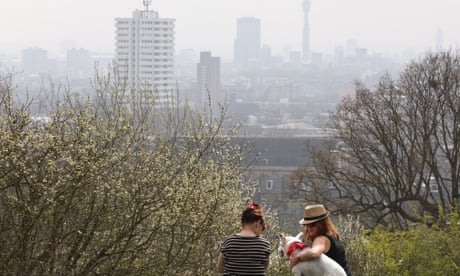 Scientists have uncovered how air pollution causes lung cancer in groundbreaking research that promises to rewrite our understanding of the disease. The findings outline how fine particulates contained in car fumes “awaken” dormant mutations in lung cells and tip them into a cancerous state. The work helps explain why so many non-smokers develop lung cancer and is a “wake-up call” about the damaging impact of pollution on human health. “The risk of lung cancer from air pollution is lower than from smoking, but we have no control over what we all breathe,” said Prof Charles Swanton of the Francis Crick Institute, who presented the findings at the European Society for Medical Oncology conference in Paris on Saturday. “Globally, more people are exposed to unsafe levels of air pollution than to toxic chemicals in cigarette smoke, and these new data link the importance of addressing climate health to improving human health. ” Smoking remains the biggest cause of lung cancer, but outdoor air pollution causes about one in 10 cases in the UK and an estimated 6,000 people who have never smoked die of lung cancer every year. Globally, about 300,000 lung cancer deaths in 2019 were attributed to exposure to fine particulate matter, known as PM2. 5, contained in air pollution. However, the biological basis for how air pollution causes cancer has remained unclear. Unlike smoking or sun exposure, which directly cause DNA mutations linked to lung and skin cancer, air pollution does not cause cancer by triggering such genetic changes. Instead, those with non-smoking lung cancer tend to carry mutations that are also seen in healthy lung tissue – small errors that we accumulate in our DNA throughout life and which normally remain innocuous. “Clearly these patients are getting cancer without having mutations, so there’s got to be something else going on,” said Swanton, who is also Cancer Research UK’s chief clinician. “Air pollution is associated with lung cancer but people have largely ignored it because the mechanisms behind it were unclear. ” The latest work unveils this mechanism through a series of meticulous experiments showing that cells carrying dormant mutations can turn cancerous when exposed to PM2. 5 particles. The pollutant is the equivalent of the ignition spark on a gas hob. In laboratory studies, Swanton’s team showed that mice that had been engineered to carry mutations in a gene called EGFR, linked to lung cancer, were far more likely to develop cancer when exposed to the pollutant particles. They also revealed that the risk is mediated by an inflammatory protein, called interleukin-1 beta (IL1B), released as part of the body’s immune response to PM2. 5 exposure. When the mice were given drugs to block the protein, they were less vulnerable to the pollutants. The work explains a previous incidental finding in a clinical trial of a heart disease drug, made by Novartis, that people on the drug – an IL1B-inhibitor – had a marked reduction in lung cancer incidence. This could pave the way for a new wave of cancer-preventing medicines, Swanton said. The team also analysed samples of healthy lung tissue, taken during patient biopsies, and found that the EGFR mutation was found in one in five of the normal lung samples. This suggests that we all carry dormant mutations in our cells that have the potential to turn into cancer – and chronic exposure to air pollution increases the odds of that happening. Sign up to First Edition Free daily newsletter Archie Bland and Nimo Omer take you through the top stories and what they mean, free every weekday morning Privacy Notice: Newsletters may contain info about charities, online ads, and content funded by outside parties. For more information see our Privacy Policy . We use Google reCaptcha to protect our website and the Google Privacy Policy and Terms of Service apply. “It’s a wake-up call on the impact of pollution on human health,” said Swanton. “You cannot ignore climate health. If you want to address human health, you have to address climate health first. ” A coroner listed air pollution as one of the factors in the death on nine-year-old Ella Kissi-Debrah in 2013. Photograph: PA Rosamund Kissi-Debrah , whose nine-year-old daughter Ella’s death in 2013 was attributed by a coroner to illegal levels of air pollution, said there continues to be a “lack of joined-up thinking” about pollution and health. “You can pump all the money you want into the NHS, but unless you clear up the air, more and more people will become ill,” she said. “My concern regarding global health is that every year we churn out the figures – air pollution causes nine million premature deaths – but no one is held accountable. ” Prof Tony Mok, of the Chinese University of Hong Kong and who was not involved in the research, said: “We have known about the link between pollution and lung cancer for a long time, and we now have a possible explanation for it. As consumption of fossil fuels goes hand in hand with pollution and carbon emissions, we have a strong mandate for tackling these issues – for both environmental and health reasons. ” Prof Allan Balmain, a cancer geneticist at the University of California, San Francisco, said the findings also had implications for our understanding of how smoking causes cancer. “Both air pollution and cigarette smoke contain lots of promoting substances. This has been known since the early 1960s but has essentially been ignored, as everyone was focused on mutations,” he said. “The tobacco companies are now saying that smokers should switch to vaping as this reduces exposure to mutagens, and therefore the cancer risk is going to go away. This is not true, as our cells get mutations anyway, and there is evidence that vaping can induce lung disease and cause inflammation similar to promoters. ”.
Source:
theguardian
URL:
https://www.theguardian.com/science/2022/sep/10/cancer-breakthrough-is-a-wake-up-call-on-danger-of-air-pollution
Prev Post
Next Post