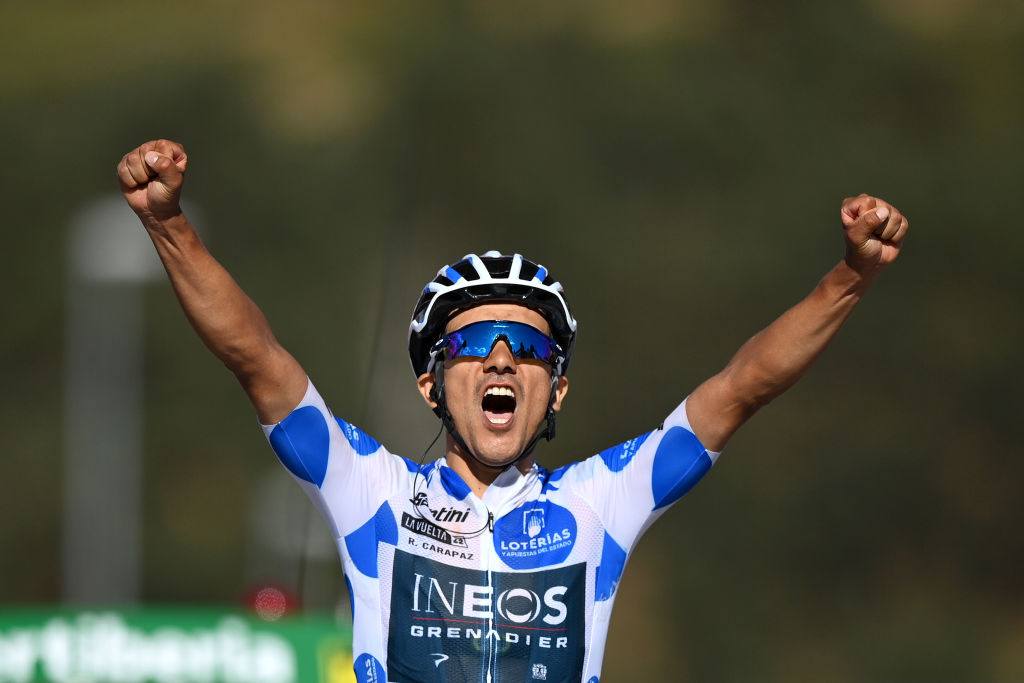 Richard Carapaz’s Vuelta a España may be on the point of concluding with zero impact on his original goal of the general classification, but the Ecuadorian racer will nonetheless conclude his last Grand Tour with Ineos Grenadiers with an impressive haul of three stage wins and the King of the Mountains classification. Neither his final stage victory nor the KOM ranking looked certain on Saturday after Alpecin-Fenix racer Robert Stannard moved ahead of a large early breakaway and began chopping back on Carapaz’ overall lead. Carapaz, also in the early break, first bounced back to move up to Stannard’s splinter group and neutralize his KOM threat. The Ecuadorian then left the only other survivor of the day’s initial move, Sergio Higuita (Bora-Hansgrohe), reeling with seven kilometres to go as he blasted towards the finish line for the stage 20 win in Navacerrada. The sum total of Saturday’s success was a confirmed win in the King of the Mountains classification and three summit finish victories in nine days. Not to mention a much more satisfactory outcome to the Vuelta than perhaps anybody could have hoped for two weeks ago as the 2020 runner-up’s GC bid imploded in the mountains of Asturias. Read MoreEvenepoel seals overall at Vuelta a España as Carapaz claims third stage victory Evenepoel says imminent Vuelta a España victory means 'big career decisions' ahead The current GC standings in the 2022 Vuelta a España after stage 20 “After a tough first week, I couldn’t be with the best,” Carapaz admitted frankly, “but I knew I could try for stages. So there’s nothing to regret and a King of the Mountains jersey is something amazing for me. ”He gave a slightly prickly answer when it was suggested to him that his latest series of triumphs, including three maiden wins for Ecuador in the Vuelta, meant he was leaving Ineos Grenadiers “through the front door. ”“This isn’t an exceptional series of results,” he countered, “I’ve performed well throughout my time here, but I am proud of what I’ve done here in Ineos,” which includes a podium finish in all three Grand Tours, not to mention an Olympic title. Although Carapaz is moving on, he’s also played an integral role in helping a new generation rider in the Ineos stable, Carlos Rodriguez, claim a top result despite a bad crash in the third week. Barring last-minute surprises, Rodriguez, who suffered on the Navacerrada stage and lost time, is set to finish seventh overall. “He’s got a great future,” Carapaz insisted. “We haven’t ridden together so much in our three years in the team, but after his crash, I could appreciate how intelligently he handled fighting back. It’s as if he’s won a Grand Tour. ”As for Carapaz himself, after wins in Penas Blancas and La Pandera in the second week, the Ecuadorian said that his third mountaintop stage victory in the Vuelta was “the most special of them all,” possibly because it had been so hard to win, and definitely because he was wearing the King of the Mountains jersey when he won it. “I had this day marked with a cross, even though I knew it would be very complicated because so much of the GC battle was going to be decided. “But I raced the way I do well, making my moves when I had to, using the break as best I could and then I knew in the last minute I had to attack. “I jumped away from Higuita because I knew if we continued at the pace we did we’d get caught by the group of GC favourites. And if I had 10 or 20 seconds at the line,” as proved to be the case on counter-attacker Thymen Arensman (DSM), then he said,"I could get stay away. ”“And it was nice, too, to have so much support from the Ecuadorian fans here. My thanks and a hug to them. I hope they enjoyed what I did. ”.
Source:
cyclingnews
URL:
https://www.cyclingnews.com/news/carapaz-rounds-out-kom-victory-with-hat-trick-of-stage-wins-at-vuelta-a-espana/
Prev Post
Next Post