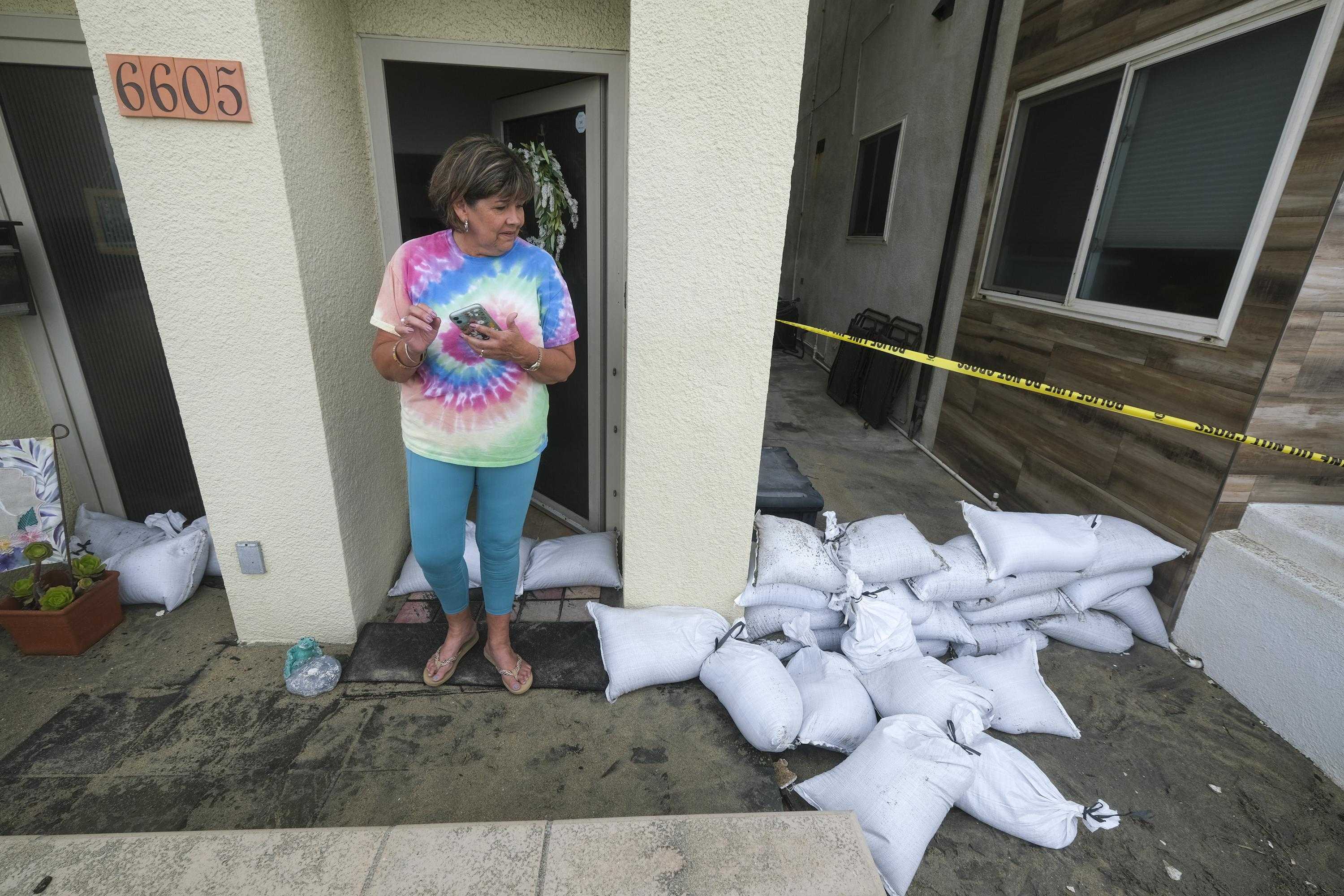 Southern California welcomed cooler temperatures and spotty rain Saturday as a tropical storm veered off the Pacific Coast and faded, helping put an end to a blistering heat wave that nearly overwhelmed the state's electrical grid. Thunderstorms were forecast for the Los Angeles region Saturday that could linger in mountainous areas on Sunday. But after Hurricane Kay made landfall in Mexico this week it quickly was downgraded to a tropical storm and weakened further until it largely disappeared, said John Dumas, a meteorologist for the National Weather Service in Oxnard, adding the scattered rain falling in the region is leftover moisture from a has-been storm. "Is the worst of it over? Yes," Dumas said. In Southern California, cooler temperatures and moisture brought respite to firefighters battling the massive Fairview Fire about 75 miles (121 kilometers) southeast of Los Angeles after sweltering heat pushed temperatures past 100 degrees Fahrenheit (38 degrees Celsius) in many locations this week. The blaze has destroyed two dozen structures and threatened more than 10,000 homes and other structure. But firefighters have made progress and said they expected full containment on Monday. Fire officials warned, however, that Northern California communities are still at risk for a heat wave and wildfire conditions and there is the potential for lightning Sunday in the Northern Sierra. In the foothills east of Sacramento, the Mosquito Fire spread to nearly 53 square miles (137 square kilometers) Saturday, threatening more than 5,000 structures in Placer and El Dorado counties and blanketing the region in smoke. "We're not seeing a corresponding drop in fire activity at this point," Cal Fire Battalion Chief Issac Sanchez said. The National Weather Service forecast an end to the grueling heat wave in the Los Angeles area Saturday. A flood watch remained in effect in mountainous areas previously charred by wildfires through the end of the day, and there was the potential for coastal flooding because of high surf, Dumas said. In Southern California, officials in coastal cities posted warning signs and made sandbags available to residents fearing flooding. Minor flooding was reported in a beach parking lot and some local roads in parched desert communities around Palm Springs. In Los Angeles, about 28,000 customers were reported Saturday to have lost power, with more than half restored by the afternoon, according to the city's department of water and power. Some mountain communities east of San Diego reported several inches of rain by early Saturday, while low-lying coastal areas saw less than an inch. In Orange County's Huntington Beach, it was hot, muggy and drizzling Saturday as Aaron French, 30, played disc golf with friends. A midday breeze made playing more comfortable after a week of stifling heat and humidity. "It's been a wild, wild week of weather," French said, while sending a disc whizzing through the unusually quiet park. "You just kind of have to accept the weather is the weather and live your life regardless of what is going on. " September already has produced one of the hottest and longest heat waves on record for California and some other Western states. Nearly 54 million people were under heat warnings and advisories across the region this week as temperature records were shattered in many areas. California's state capital of Sacramento hit an all-time high Tuesday of 116 degrees (46. 7 C), breaking a 97-year-old record. The state set a record for power consumption Tuesday as air conditioners whirred amid the heat and authorities nearly instituted rolling blackouts when the electrical grid capacity was at its breaking point. Scientists say climate change has made the West warmer and drier over the last three decades and will continue to make weather more extreme and wildfires more frequent and destructive. In the last five years, California has experienced the largest and most destructive fires in state history. Firefighters said Saturday they have so far been unable to corral any part of the Mosquito Fire, which has burned near the town of Foresthill, home to about 1,500 people. David Hance was sleeping on the porch of his mother's Foresthill mobile home when he woke up to a glowing red sky early Wednesday and was ordered to evacuate. "It was actually fricking terrifying, cause they say, 'Oh, yeah, it's coming closer,' " he said. "It was like sunset in the middle of the night. " The fire has covered a large portion of the region with smoke. California health officials urged people in affected areas to stay indoors where possible. Organizers of the Tour de Tahoe canceled the annual 72-mile (115-km) bicycle ride scheduled Sunday around Lake Tahoe because of the heavy smoke from the blaze — more than 50 miles (80 km) away. Last year's ride was canceled because of smoke from another big fire south of Tahoe. The Mosquito Fire's cause remained under investigation. Pacific Gas & Electric said unspecified "electrical activity" occurred close in time to the report of the fire on Tuesday. .
Source:
wvtm13
URL:
https://www.wvtm13.com/article/coastal-storm-cools-california-heat-wave-dampens-wildfire/41151166
Prev Post
Next Post