Cricketing wonderkid, 3, took 2 wickets in 3 balls during under 11s game 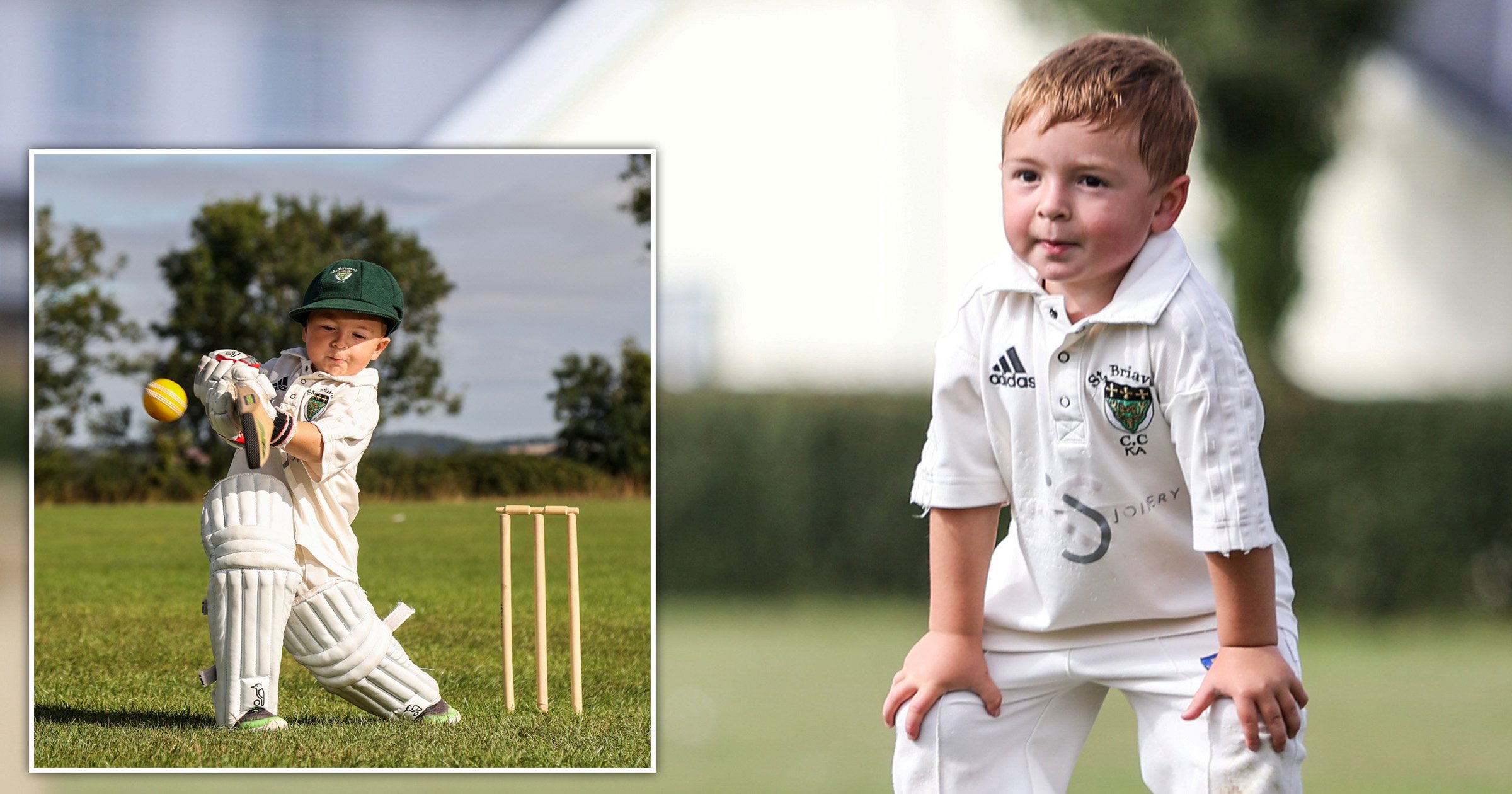 Korey Adams has been playing in matches with kids more than three times his age (Picture: SWNS) This is the three-year-old cricketing superstar who has already played for an under 11s team and wants to represent England. Korey Adams has been playing since he was 12 months old and began batting and bowling before he could walk. The wonderkid is not even old enough to attend nursery but has already taken two wickets for three runs in a match for children three times his age, when he scored 12 not out. Young Korey styles himself as an all-rounder and practices every day. Footage shows the Gloucestershire superstar padded up and perfecting his strokes. Dad Tom Adams explained: ‘Korey has been playing since I can remember – he absolutely loves it. ‘I’d honestly say he is probably better than me. {"@context":"https:\/\/schema. org","@type":"VideoObject","name":"Metro. co. uk","duration":"T3M1S","thumbnailUrl":"https:\/\/i. dailymail. co. uk\/1s\/2022\/09\/06\/13\/62111715-0-image-a-8_1662466241621. jpg","uploadDate":"2022-09-06T13:09:33+0100","description":"Korey Adams has been playing the game since he was 12 months old, and has played for St Briavels under 11s v Lydney cc under 11s where he performed with both bat and ball. ","contentUrl":"https:\/\/videos. metro. co. uk\/video\/met\/2022\/09\/06\/6948567205464225100\/480x270_MP4_6948567205464225100. mp4","height":270,"width":480} To view this video please enable JavaScript, and consider upgrading to a web browser that supports HTML5 video Korey does not yet play for a team regularly since he is too young – but joins in during practice games at his dad’s club St Briavels. The 33-year-old father, from Lydney, added after Korey’s match for St Briavels against Lydney: ‘He took two wickets in three balls in an under 11s inter-club game and was 12 not out and he hasn’t even turned four! ‘That was his highest score, so far. He’s more of a batter but a very decent bowler too. ’ The prodigy’s cricket career started back in 2018 Tom decided to set up the local club in their hometown. The youngster is an all rounder (Picture: SWNS) But his Dad says he is more of a batter (Picture: SWNS) Korey likes to practice every day (Picture: SWNS) When Korey was born in November that year, his Dad was keen to bring him along to all the games to test his interest – which swiftly turned into the little boy’s favourite pastime. The father-of-two continued: ‘Korey came to every game in 2019, and just after that he started picking up a bat and ball – and started having a go. ‘Just four months after he turned one, he was able to do things properly – and that is when we brought him all the kit. ‘We managed to find some tiny little pads and gloves online in a size tiny. ’ Much to the surprise of his parents, Korey wakes up the household at 5:30am most mornings, desperate for his dad to help him get his kit on so he can practice. The cricket sensation had to get special pads because he is so small (Picture: SWNS) Korey got 12 not out during his appearance for the under 11s (Picture: SWNS) Tom, who currently works as a builder and has been playing the sport since his school days, said: ‘If he gets a chance he will have a bowl and swing with a bat most days. ‘I often take him to practice in the nets we have nearby but we got him a little bowling machine in the hallway for Christmas. ‘Ever since Korey gets up in the mornings, comes into our room and says, “Dad, I want to get downstairs and get padded up so I can play”. ’ ‘Someone has got to get up with him – it’s usually me!’ Korey’s impressive skills on the pitch capture the hearts of the crowd when he plays. Korey started batting and bowling before he could walk (Picture: SWNS) ‘Korey has been playing since I can remember – he absolutely loves it’, his Dad said (Picture: SWNS) Tom explained: ‘Every game he’s comes to with me, everyone comments on what a future star he could be – especially when he’s all padded up in his kit. ‘They are all very surprised at his talent for such a young age. ‘Even the opposition comment on how great he is at batting and bowling. ’ Korey also plays in the club’s end of season game with the juniors – some aged 15 to 18 – but is not yet allow to officially play for a team. Tom said: ‘We have a junior section in our club that starts from under 9s – so he can’t join that quite yet. Catch of the week ðŸ‘Photo of the week ðŸ“¸Village moment of the week ðŸ˜‚Hereâ€™s six of our favourite things from the world of cricket ðŸðŸŒpic. twitter. com/sHyotJtvS4— Thatâ€™s so Village (@ThatsSoVillage) August 15, 2022 ‘They are still a bit too old for him at the moment, but when he’s stronger he can play in that age group without any trouble at all. ‘If we could find him an under 7s or 8s team he would definitely be able to hold his own. ‘It’s just amazing because kids around his age don’t even know how to pick up a bat, if he played them he would be launching the ball way too hard for the toddlers!’ Korey dreams to travel the world with the England cricket team when he grows up. Tom added: ‘Hopefully he carries on the game because he will have a bright future if he does. ’ Korey recently made an appearance in the That’s So Village Twitter video ‘Top Six Favourite Things from the World of Cricket’. Got a story? Get in touch with our news team by emailing us at [email protected] co. uk. Or you can submit your videos and pictures here. For more stories like this, check our news page. Follow Metro. co. uk on Twitter and Facebook for the latest news updates. You can now also get Metro. co. uk articles sent straight to your device. Sign up for our daily push alerts here. MORE : Millions of children are missing out on sports activities due to cost of living crisis.
Source:
metro
URL:
https://metro.co.uk/2022/09/06/cricketing-wonderkid-3-took-2-wickets-in-3-balls-during-under-11s-game-17311273/
Prev Post
Next Post