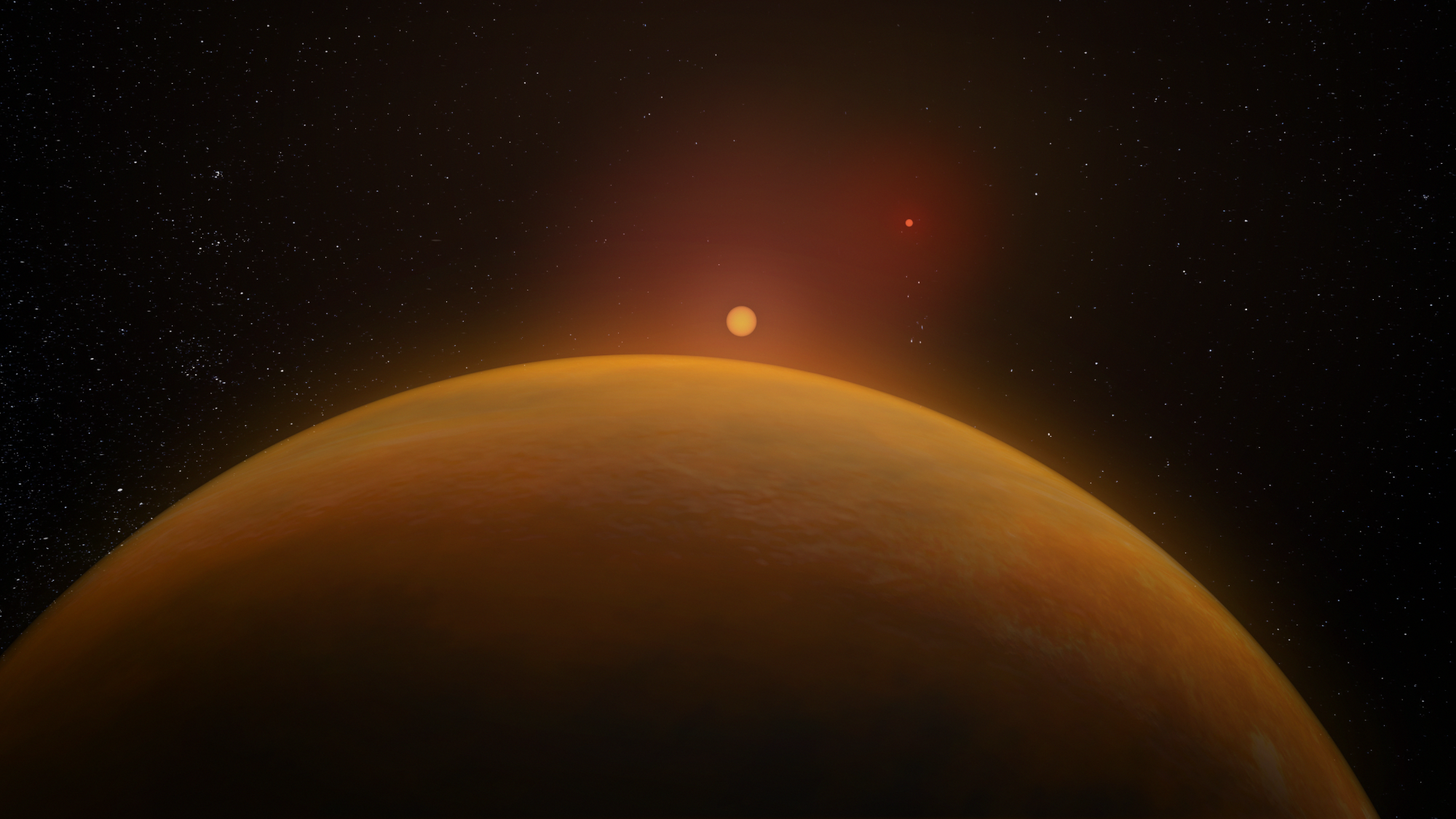 The orbit of an exoplanet around a star in a binary star system has been portrayed in three dimensions for the first time. The planet orbits its star at a different angle to the plane of the orbit of the two stars, and the misalignment could offer clues as to how planets form in binary systems. The exoplanet , GJ 896Ab (note the lower case b for the planet), was found in the binary system GJ 896AB (note the capital A and B for the two stars) that is located 20. 3 light-years away from Earth. Astronomers tracked the motion of the binary star system through space with the help of archived optical observations dating from 1941 to 2017, with extra data covering 2006 to 2011 gathered by the Very Long Baseline Array (VLBA), which is a network of 10 radio telescopes strung across the United States. The researchers also made new observations with the VLBA in 2020. The astronomers, led by Salvador Curiel of the National Autonomous University of Mexico (UNAM), found that as the star GJ 896A moves through space, it appears to wobble along its path. This wobble is caused by an orbiting planet with 2. 3 times the mass of Jupiter that completes one orbit every 284. 4 Earth days. Between the planet and its star is a common center of mass, known as the barycenter; the star's wobble is the result of its motion around this common center of mass. Related : 10 amazing exoplanet discoveries This technique of detecting the motion of stars through space, and any deviations in that motion, is called astrometry. Astrometry is the only means by which the orbits of a planetary system with more than one star can be interpreted in three dimensions, since astronomers are visibly detecting the wobble and the orientation of the orbits. Intriguingly, the plane in which the planet orbits is misaligned by 148 degrees relative to the plane of the orbit of the two stars around each other. "This means that the planet moves around the main star in the opposite direction to that of the secondary star around the main star," Gisela Ortiz-León, an astronomer at UNAM and the Max Planck Institute for Radio Astronomy in Germany and team member on the project, said in a statement (opens in new tab) . Less than 4% of known exoplanets are in binary-star systems. This small proportion is in part because it's trickier to detect planets in binary systems, but also because models suggest that the existence of a companion star can truncate and destabilize a planet-forming disk. "Maybe those models need to be adjusted," said UNAM's Joel Sanchez-Bermudez. One problem in forming such a system is that gas giants are thought to take 5 to 10 million years to accrete all their gas from the planet-forming disk around them. However, the current models suggest that such a disk in a binary system survives for less than 1 million years before gravitational tides from the companion star break the disk apart. Furthermore, in the case of GJ 896AB, the two stars are red dwarfs , which makes the existence of a gas giant planet in the system even more surprising. Scientists think red dwarfs lack the necessary amount of raw material to form giant planets, but the presence of a gas giant in this binary system suggests that planets could form differently when there are two stars present. "Additional detailed studies of this and similar systems can help us gain important insights into how planets are formed in binary systems," Sanchez-Bermudez said. — Superhabitable planets: Alien worlds that may be more habitable than Earth — 7 ways to discover alien planets — The 10 most Earth-like exoplanets There are currently two competing models for how binary systems and their planets form. One is termed disk fragmentation, whereby there is originally one star- and planet-forming disk that becomes gravitationally unstable and breaks apart into two separate disks that form two stars and any planets around them. The other model is called turbulent fragmentation. In this explanation, turbulence in the original cloud of gas leads to two or more dense concentrations of material forming, which independently collapse to form the stars and any accompanying planets. Now, these models will need to factor in the misalignment of GJ 896Ab by 148 degrees. Whichever better replicates the strange system could indicate how binary systems form. The research was published on Sept. 1 in The Astronomical Journal . Follow Keith Cooper on Twitter @21stCenturySETI. Follow us on Twitter @Spacedotcom and on Facebook . .
Source:
space
URL:
https://www.space.com/exoplanet-surprise-tilted-orbit-binary-star/
Prev Post
Next Post