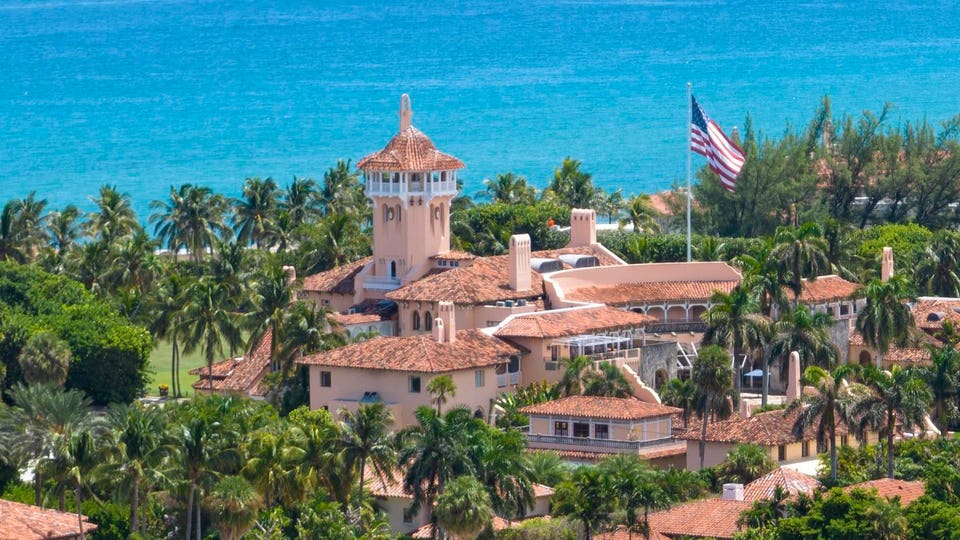 Breaking Business DOJ Appeals Ruling Appointing Special Master To Review Trump Mar-A-Lago Documents Alison Durkee Forbes Staff Following New! Follow this author to stay notified about their latest stories. Got it! Sep 8, 2022, 04:22pm EDT | Updated Sep 8, 2022, 04:49pm EDT Share to Facebook Share to Twitter Share to Linkedin Topline The Justice Department indicated Thursday it will appeal a Trump-appointed judge’s ruling granting a “special master” to review the materials federal agents seized during their search of Mar-A-Lago last month, and asked the court to block the special master from getting classified materials, as the ruling has come under widespread scrutiny from legal experts and threatens to delay the DOJ’s ongoing investigation into former President Donald Trump. Former President Donald Trump's Mar-a-Lago club in Palm Beach, Florida, on Aug. 31. Copyright 2022 The Associated Press. All rights reserved Key Facts The DOJ asked U. S. District Judge Aileen M. Cannon to pause her ruling just as it bars the DOJ from reviewing classified materials as part of its investigation and requires it to turn over those classified documents to a special master, and filed a notice stating its intention to appeal the case to the 11th Circuit Court of Appeals. Cannon ruled Monday that a special master should be appointed in the case after Trump asked her to do so, ruling against the DOJ, which protested that a special master was unnecessary and would hinder its investigation. The special master, a court-appointed third party who’s impartial in the case, would review the more than 11,000 materials the DOJ took from Mar-A-Lago in August and identify any materials that are shielded by attorney-client privilege or executive privilege, stopping the DOJ from moving forward with its review of the materials until the special master’s work is complete. The government’s request for Cannon to stay her order applies only to classified documents and not to the appointment of a special master in general. Cannon shot down the government’s arguments that a special master was unnecessary because the documents seized belong to the National Archives and not to Trump, and that the review wasn’t warranted given the DOJ has already reviewed all the documents itself and identified materials covered by attorney-client privilege. She ruled that some of the materials did in fact belong to Trump and that a special master was necessary to prevent “reputational harm” to Trump if privileged materials led him to be indicted, and she disagreed with the DOJ’s argument that Trump cannot shield materials under executive privilege from the actual executive branch. Chief Critic Legal experts have widely criticized Cannon’s order and decision to block an ongoing government investigation, describing the ruling and the judge’s reasoning to the New York Times as “deeply problematic,” “radical,” “laughably bad” and “genuinely unprecedented. ” What To Watch For Trump’s attorneys and the Justice Department are scheduled to present a list of potential special master candidates to the district court on Friday, though it remains to be seen what impact the appeal will have on the proceedings. The DOJ has still not filed a formal appeal with the 11th Circuit and it’s still unclear what the exact scope of that appeal will be, and whether it will also only be focused on classified documents. What We Don’t Know What effect the ongoing court battle over a special master will have on the investigation. The Justice Department has argued that the special master’s review will impede its investigation by causing a delay, and even if the government ultimately gets an appeals court to rule in their favor, the court proceedings will still likely draw out the probe. Courts will also have to determine whether Trump can shield documents under executive privilege from the White House, which legal experts have said they don’t believe he has the power to do. Vox notes the ongoing legal battle could delay the investigation by “months or even years,” given it’s unclear how long it will take for the appeals court to rule on the case and the possibility it could then go to the Supreme Court. Key Background Trump asked Cannon to appoint a special master two weeks after the FBI searched Mar-A-Lago on August 8, after Trump and his attorneys allegedly failed to give back all the White House documents being kept at Mar-A-Lago, including hundreds of classified and top-secret documents. The Justice Department is investigating whether Trump violated three federal statutes by mishandling the government documents, including the Espionage Act, and alleged in court filings it believes the ex-president obstructed the government’s probe by failing to turn over all the documents he had on hand and “conceal[ing]” them even after being served a grand jury subpoena. It was unclear whether the DOJ would appeal Cannon’s ruling in the case, and legal experts speculated to the Times the government could just accept a special master rather than risk the further delays of a prolonged court battle. Other legal experts said they thought the DOJ should appeal the case, however, so as to not let the perceived flaws with Cannon’s ruling stand. Further Reading Judge Sides With Trump, Grants Special Master To Review Mar-A-Lago Documents (Forbes) ‘Deeply Problematic’: Experts Question Judge’s Intervention in Trump Inquiry (New York Times) Follow me on Twitter . Send me a secure tip . Alison Durkee Editorial Standards Print Reprints & Permissions.
Source:
forbes
URL:
https://www.forbes.com/sites/alisondurkee/2022/09/08/doj-appeals-ruling-appointing-special-master-to-review-trump-mar-a-lago-documents/
Prev Post
Next Post