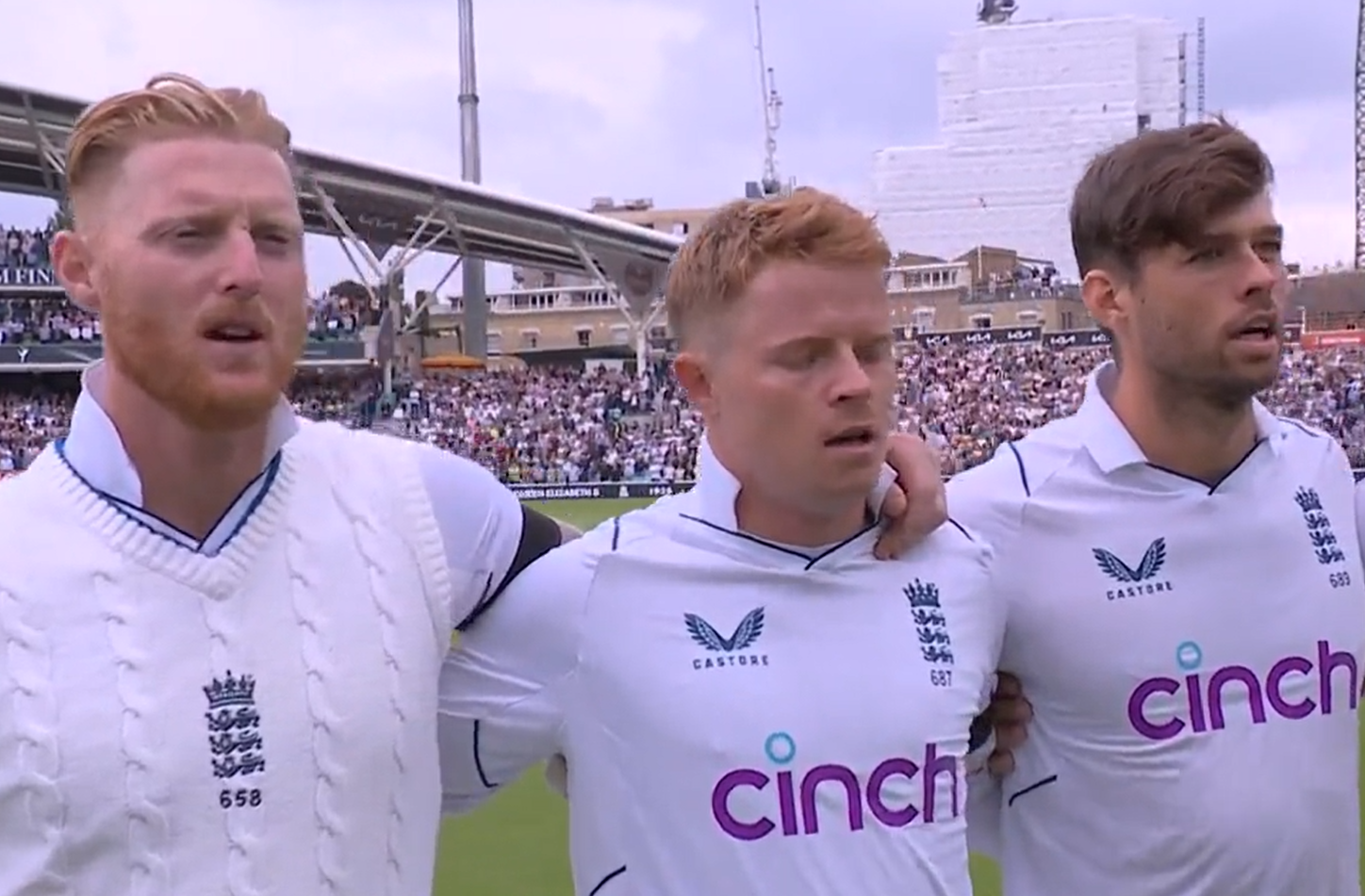 An historic rendition of God Save the King took place ahead of the resumption of the third Test between England and South Africa as well as a minute’s silence in a touching tribute to the Queen. The death of the long-serving monarch, announced by Buckingham Palace officials on Thursday evening, led to Friday’s play being called off as a mark of respect but the green light was given for all international, domestic and recreational cricket fixtures in this country to go ahead from Saturday. Ahead of the third day’s play in the series decider, there was a poignant commemoration at the Kia Oval to the Queen, with an impeccably observed minute’s silence followed by a one-bell chime from Senior NCO Robert Brockelsby Miller of the Irish Guards. Laura Wright then sang the national anthems of both South Africa and England, the latter marking the first time God Save the King had been sung at a televised sporting event. All players and coaches wore black armbands while there was no branded advertising by the boundary edge. England captain Ben Stokes said on Sky Sports : ‘It’s been very sad news for not only the nation but the world with the Queen’s passing. ‘She was someone who dedicated her life to the nation, someone that we take incredible inspiration from and we are honoured to be able to walk out on the field in memory of the Queen. The Oval stands to sing ‘God Save the King’. pic. twitter. com/sI87bQyaH0 ‘We know how much the Queen loved this sport, and the show must go on. ‘I’m sure she’ll be looking down on all the sport that’s still going ahead over this weekend and that we’re going out there in her honour. ‘I’m very pleased and proud we can do that. ’ Once play got underway, England’s seamers capitalised on just enough movement under leaden skies to send South Africa’s top order into a tailspin and raise hopes of the hosts ending a fruitful summer with a sixth win. Robinson, in particular, was at his probing best, striking in his first over by sending Dean Elgar’s stump cartwheeling after breaching the gate of the South Africa captain as the England seamer bowled eight overs unchanged, claiming four for 21 and sending his Test bowling average into the teens. Both Proteas openers were back in the pavilion after 14 balls as James Anderson, featuring in his 175th Test, drew the edge of Sarel Erwee and a diving Ben Foakes accepted the first of his four catches in the opening session. Stumps given black armbands for Queen Elizabeth II as England vs South Africa resumes England v South Africa Test match suspended following Queen's death England vs South Africa Test series: How to watch on TV in the UK Keegan Petersen unwisely shouldered arms to a nip-backer from Robinson, deceived by the length, while the returning Ryan Rickelton was drawn into driving in Broad’s first over but only succeeded in edging behind to Foakes. Kyle Verreynne and Wiaan Mulder were snared by the rampaging Robinson either side of the drinks interval to leave South Africa reeling on 36 for six, with Khaya Zondo, in only his second Test, and seam bowling all-rounder Marco Jansen left to pick up the pieces after a monumental top-order collapse. Zondo clubbed Jack Leach for six as South Africa avoided any further dismissals before lunch but it was still England firmly in the driving seat. MORE : Stumps given black armbands for Queen Elizabeth II as England vs South Africa resumes MORE : England vs South Africa third Test to resume on Saturday following death of Queen Elizabeth II For more stories like this, check our sport page . Follow Metro Sport for the latest news on Facebook , Twitter and Instagram . .
Source:
metro
URL:
https://metro.co.uk/2022/09/10/englands-cricketers-belt-out-historic-rendition-of-god-save-the-king-17344999/
Prev Post
Next Post