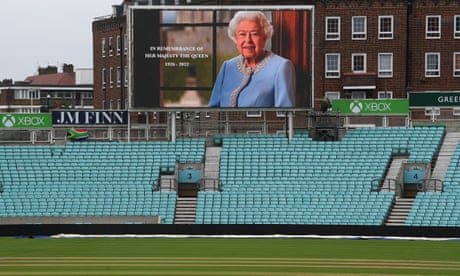 Play at the third Test between England and South Africa will begin on Saturday morning, preceded by what may be the first full, official televised rendition of God Save the King at a sporting event. One of the many issues of protocol that the England and Wales Cricket Board had to consider on Friday was whether there would be any issue with the anthem being played in SE11 before the Accession Council formally proclaims Charles III as monarch at St James’s Palace. With the Council’s meeting scheduled to start just an hour before play gets under way at the Oval any problem could have led to another delay, but the cricket was eventually cleared to resume. The first official rendition of God Save the King will be sung at St Paul’s Cathedral at the end of a memorial service for the Queen on Friday night. Organisers also had to decide whether they should hold a single minute’s silence or two (protocol demanded one), whether it would be appropriate to ring the bell before play (yes), whether a military band could be involved – the Band of the Household Cavalry would have performed the anthem on Thursday had rain not intervened (also yes) – and whether the traditional rendition of Jerusalem before the start of play should also go ahead (probably not). But the Test will have to be decided in just three days after attempts to extend the match, which had already lost its first day to bad weather before surrendering the second as a mark of respect to Queen Elizabeth II, were stymied by South Africa’s hectic schedule. The tourists are due to return home on Tuesday and several players will have only a few days there before leaving for a white-ball tour of India. She loved sport, be honoured to play in her memory ❤️ https://t. co/sNSJ3qJreW — Ben Stokes (@benstokes38) September 9, 2022 The decision to restart cricket at all levels from Saturday was announced two and a half hours after the Premier League had made public its decision to postpone this weekend’s fixtures, reflecting the unusual complexity of the situation the ECB was placed under. This included the fact that the Oval lies on the Manor of Kennington, part of the estate of the Duchy of Cornwall since 1337. The title is traditionally held by the eldest son of the reigning monarch and, as such, King Charles III had been Duke of Cornwall from his mother’s coronation in 1952 until his own ascent to the throne, whereupon Prince William inherited the position. Charles last visited the Oval as recently as June, though it was for a platinum jubilee celebration rather than the Vitality Blast. England’s players were keen to play, and almost four hours before the ECB made its decision, Ben Stokes had publicly called for the game to continue. “She [the Queen] loves sport,” the captain wrote on Twitter , stating he would “be honoured to play in her memory”. Players and coaches will wear black armbands for the remainder of the Test, while all removable advertising, including boundary ropes and sightscreens, will be removed. Spectators have also been asked to arrive early in order to take part in a celebration of the Queen, which is due to start at at 10. 30am. Surrey have also made it clear that anyone who turns up in fancy dress will be turned away at the gates. .
Source:
theguardian
URL:
https://www.theguardian.com/sport/2022/sep/09/england-v-south-africa-to-resume-with-historic-rendition-of-national-anthem-third-test-cricket
Prev Post
Next Post