Explore common space misconceptions with All About Space magazine 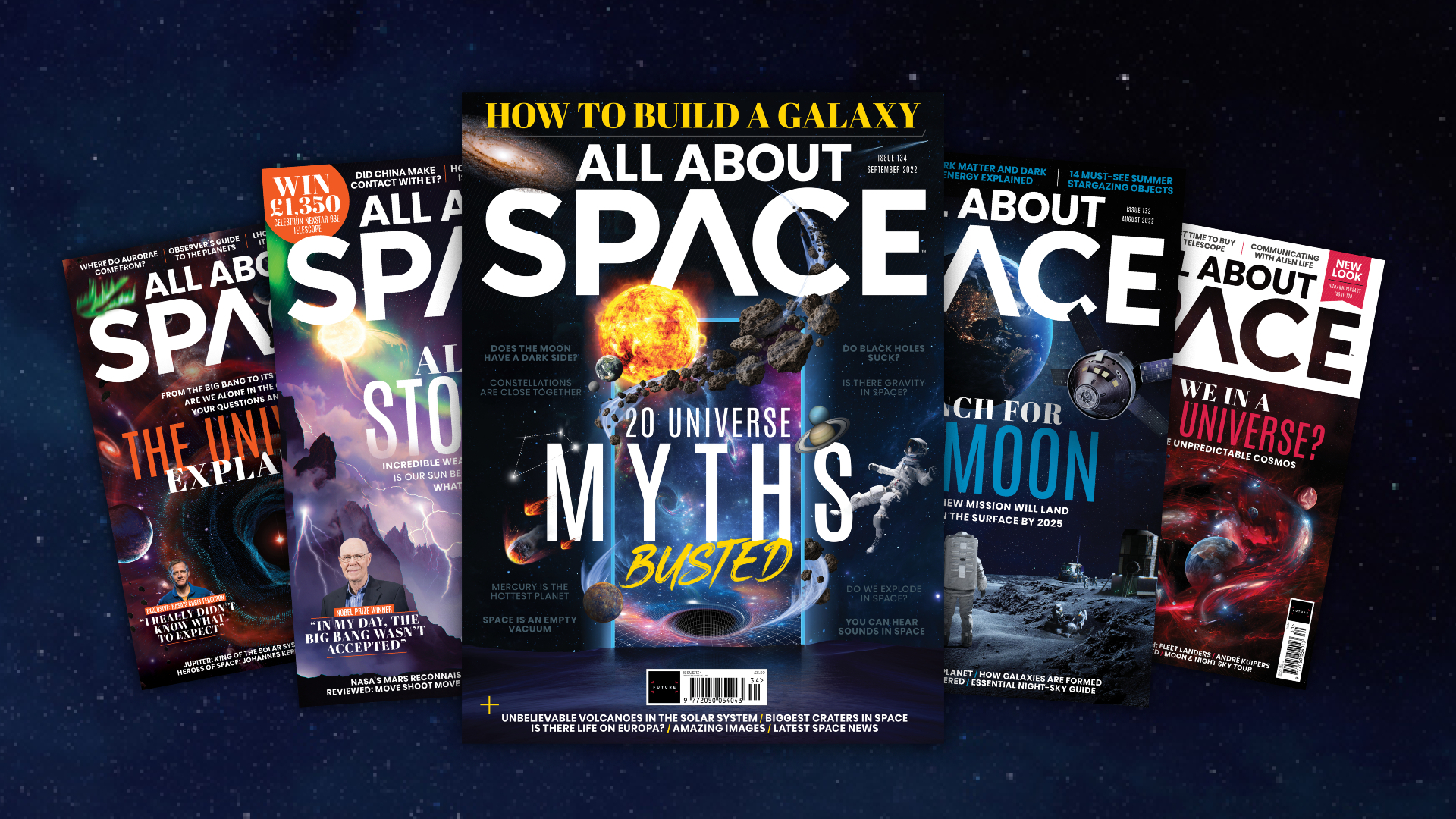 Inside All About Space issue 134, on sale now, explore 20 myths about the universe that need debunking. From whether you can see the Great Wall of China from space to why spacecraft heat up during retry to Earth . For this cover feature, All About Space takes a demystifying tour of the universe in a bid to uncover common misconceptions that continue to dupe us. The latest issue also includes a Q&A with British planetary scientist and science fiction writer Simon Morden about his obsession with Mars and his latest science-fact book on the Red Planet. Related: 15 stunning places on Earth that look like they're from another planet Get All About Space delivered straight to your door or digital device. Subscribe to All About Space (opens in new tab) from $8. 50 per quarter/three issues. Elsewhere in the issue, you'll learn about why astronauts experience muscle loss and how life on the International Space Station takes its toll on the human body. The feature also looks at how sending worms into space is helping unlock ways for humans to spend longer beyond Earth. All About Space also explores how a group of researchers from MIT may have the answer to reducing launch costs by building a space fuel depot. If interplanetary missions could field up in orbit instead of having to launch everything in one go it could cut the cost of individual missions significantly. All About Space explores how such a venture might work. The magazine also takes an in-depth look at space volcanoes and how they have helped shape the bodies of our solar system . The volcano feature explores the difference between the more familiar volcanoes that spew out molten rocks at high temperatures and the less familiar cryovolcanoes, colloquially known as ice volcanoes. You can also find an in-depth stargazer section filled with useful information on what to look out for in the night sky . This issue includes a deep sky challenge that lists six treasures of the Autumn Milky Way . Among the richest for deep-sky observers, September brings star clusters, nebulas and galaxies galore. Take a peek below at All About Space issue 134's biggest features. Our understanding of the workings of the universe is better than it has ever been, but there are still a number of misconceptions that manage to fool many of us. Some of the following might sound plausible, but barely any of it is true: the sun is a burning orb of yellow fire and the temperature is higher during the summer months because we orbit closer than we do in winter. Mercury is the closest planet to our star and must therefore be the hottest. The lunar phases are caused by the shadow of Earth and at night we can only see one side of the Moon , so the other must be in perpetual darkness. The stars form patterns with their close neighbors and are grouped into local constellations . The twinkling light that they produce travels to Earth in a straight line, unaffected by the pull of gravity . Comets race past with their tails pointing back towards the direction that they came from, and as meteorites tumble through the atmosphere, they heat up so much that it's not safe to pick them up from the ground. Read the full feature in the latest All About Space (opens in new tab) . The universe is packed with galaxies. Everywhere we look we see galaxies crammed into the cosmos, grouped in clusters and great sheets that are littered throughout space-time. The most distant galaxies ever seen have been identified by the Hubble Space Telescope as being 13. 4 billion light years away. Yet these are not even the most distant galactic structures out there. It's the first galaxies that hold the record for being the furthest away from us. However, we're yet to see them. To do so we will need the infrared prowess of the recently launched James Webb Space Telescope (JWST), which will be able to see galaxies as they formed just 300 or 400 million years after the Big Bang — the event that threw the cosmos into existence. Understanding how galaxies form is a bit like trying to put a jigsaw puzzle together. Read the full feature in the latest All About Space (opens in new tab) . Getting into space is hard. With the engines and rockets, we have now, the majority of the weight of a rocket at launch is fuel and oxidizer to overcome Earth's gravity. And if we want to go beyond Earth orbit, the problem gets even worse. If you could fuel up your interplanetary mission in orbit instead of having to launch everything in one go, the cost of individual missions could be cut significantly. With this in mind, a team from the Massachusetts Institute of Technology (MIT) has proposed an intermediate concept that could build up propellant depots with traditional missions. Led by Professor Jeffrey Hoffman, himself a veteran of five Space Shuttle missions, the team proposes to take advantage of contingency propellants that would be carried on lunar missions anyway. Read the full feature in the latest All About Space (opens in new tab) . .
Source:
space
URL:
https://www.space.com/all-about-space-magazine-issue-134/
Prev Post
Next Post