From shop closures to sport cancellations, everything cancelled after the death of the Queen 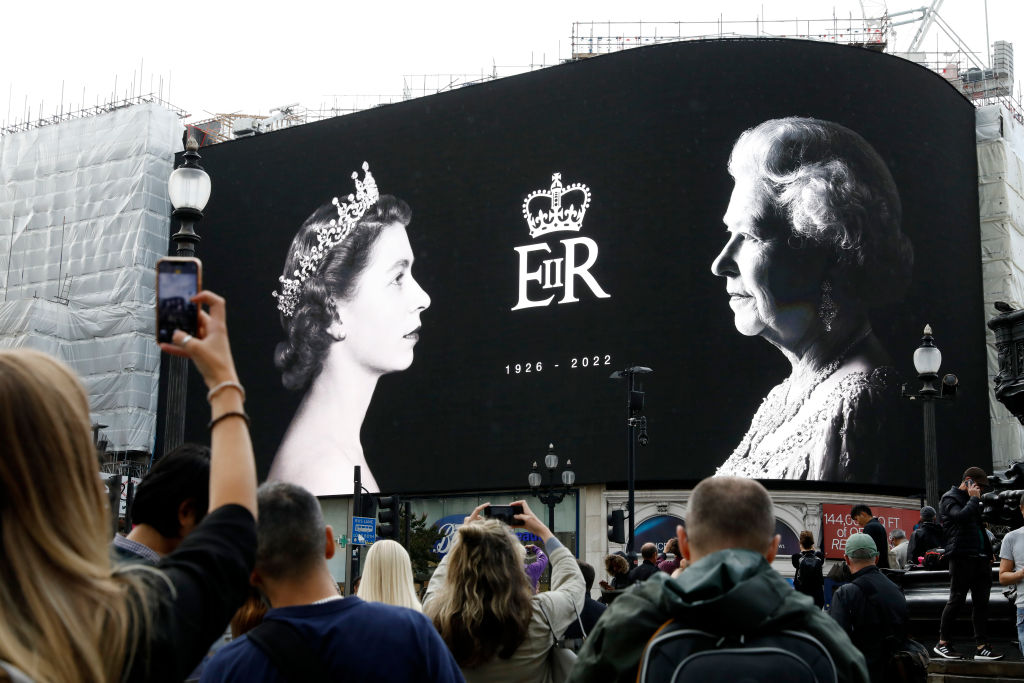 Her Majesty’s death has brought parts of life in the country to a standstill (Picture: Tristan Fewings/Getty Images) Following the death of Queen Elizabeth II, the country is going to take some time to adjust – and not just to the reign of King Charles III after 70 years of having a national matriarch. The nation should expect a change to business-as-usual for a while, with everything from sports events to TV shows likely to be impacted. Here’s what’s been delayed or called off so far… Strikes The Royal Mail strikes and planned train strikes for later in September have both been cancelled. The National Union of Rail, Maritime and Transport Workers (RMT) general secretary Mick Lynch said in a statement: ‘RMT joins the whole nation in paying its respects to Queen Elizabeth. ’ ‘The planned railway strike action on 15 and 17 September is suspended. We express our deepest condolences to her family, friends and the country. ’ Queen Elizabeth II dead: What happens next? Her Majesty Queen Elizabeth II has died after 70 years on the throne, her death announced by Buckingham Palace on September 8, 2022. She died at the age of 96 at her home in Balmoral, with her son, the now King Charles, and daughter Princess Anne by her side. King Charles III addresses the nation for the first time What happens next following the death of the Queen? Charles III: The boy who waited 70 years to be King RIP Ma'am: Your heartfelt messages to her Majesty The Queen Charles III formally proclaimed as King in first ever televised Accession Council Where will King Charles and Camilla, the Queen Consort, live? Follow Metro. co. uk's live blog for the latest updates, and sign Metro. co. uk's book of condolence to Her Majesty here. {"@context":"https:\/\/schema. org","@type":"VideoObject","name":"Metro. co. uk","duration":"T41S","thumbnailUrl":"https:\/\/i. dailymail. co. uk\/1s\/2022\/09\/09\/21\/62262503-0-image-a-1_1662756811205. jpg","uploadDate":"2022-09-09T21:53:13+0100","description":"'Wasn't everything that we know about this Queen that you just got on with things and the show would go on?'","contentUrl":"https:\/\/videos. metro. co. uk\/video\/met\/2022\/09\/09\/2224767604907133204\/480x270_MP4_2224767604907133204. mp4","height":270,"width":480} To view this video please enable JavaScript, and consider upgrading to a web browser that supports HTML5 video Sports From football to horse racing, many different sporting events have been postponed. For football, It was announced that all this weekend’s matches have been postponed. This includes all Premier League and EFL games. It has been suggested that games may be suspended until October, though this is yet to be confirmed. An EFL statement read: ‘Further to discussions on Friday morning it has been determined that all EFL fixtures from 9-10 September will be postponed as a mark of respect by the National Sport to the passing of HRH Queen Elizabeth II. ’ West Ham and FCSB players wore black arm bands on Thursday after it was announced the Queen had passed (Picture: Richard Heathcote/Getty Images) Horse racing, a favourite sport of the Queen’s, was called off on Thursday, Friday and Saturday. Saturday’s fixtures were also called off “as an ongoing mark of respect for the special bond between Her Majesty The Queen and British racing. ” Racing returns across the UK on Sunday with the exception of Musselburgh due to the Queen’s body lying in state in Edinburgh. Rugby Union games on Friday were moved from Friday to Saturday. The two games scheduled to take place on Friday evening – Bristol vs Bath and Sale vs Northampton – were postponed but still take place this weekend. Bristol vs Bath will now take place on Saturday instead and kick-off at 5. 30, while Sale vs Northampton has been rescheduled for 3pm on Sunday. {"@context":"https:\/\/schema. org","@type":"VideoObject","name":"Metro. co. uk","duration":"T1M51S","thumbnailUrl":"https:\/\/i. dailymail. co. uk\/1s\/2022\/09\/09\/17\/62254939-0-image-a-5_1662741680444. jpg","uploadDate":"2022-09-09T17:40:05+0100","description":"In true British style, the Queen made small talk about the weather during one of the last documented engagements she ever conducted. ","contentUrl":"https:\/\/videos. metro. co. uk\/video\/met\/2022\/09\/09\/1244719651502208491\/480x270_MP4_1244719651502208491. mp4","height":270,"width":480} To view this video please enable JavaScript, and consider upgrading to a web browser that supports HTML5 video Cycling was also affected. The final three stages of the Tour of Britain will not take place, and the final standings have been taken following the conclusion of stage five on Thursday, with Gonzalo Serrano (Movistar Team) the winner. “The Tour of Britain organisation, alongside the teams, riders and officials involved in the event, send their deepest condolences to the Royal Family at this sad time,” a statement read. TV programming While TV shows are under no obligation to do so, a lot have chosen to shift around their usual schedule. Any political satire on the BBC will be delayed, including programmes like Mock the Week and Have I Got News For You. Channel 4, on the other hand, decided to push ahead with the return of Gogglebox on Friday night – something which fans thanked the network for doing. The Last Leg was pulled from Friday night broadcasting though. Strictly is meant to return on September 17 (Picture: BBC) Host Adam Hills released a statement on Twitter revealing they’d decided to cancel Friday’s episode. ‘We’ve decided not to do an episode of @thelastleg tonight. It just doesn’t feel right,’ he said. Looking ahead to new seasons of The Great British Bake Off and Strictly Come Dancing – both due to return in the coming weeks – there has been speculation they could be delayed, but nothing has been confirmed yet. Festivals The Last Night of the Proms has been cancelled (Picture: PA) Many local and large-scale festivals have been called off following the news. These include: Hackney CarnivalThe Last Night of the Proms at the Royal Albert HallBBC Radio 2 Live in Leeds Shops Shops and businesses are allowed to stay open following the death of the Queen, but it is down to individual stores’ discretion whether to close. Selfridges and Liberty are two retailers that have closed following the news. Both will reopen today (Saturday 10). MORE : AP McCoy details awkward moment he broke royal protocol – and the withering look the Queen gave him MORE : Former PMs including Tony Blair and Boris Johnson line up at the King’s accession Follow Metro across our social channels, on Facebook, Twitter and Instagram. Share your views in the comments below. .
Source:
metro
URL:
https://metro.co.uk/2022/09/10/everything-cancelled-or-closed-following-the-queens-death-17343486/
Prev Post
Next Post