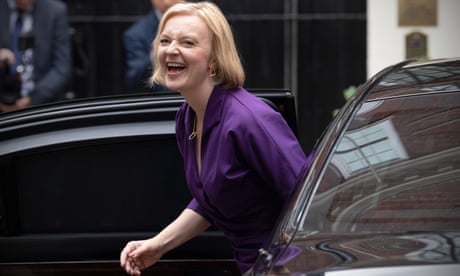 The government’s independent climate and infrastructure advisers have delivered an unprecedented rebuke to Liz Truss for focusing on attempts to increase the UK’s gas production to bring down energy prices instead of policies to reduce demand. From her first hours in the job, the prime minister has prioritised a series of measures on energy policy to head off the cost of living crisis. She will unveil a cap on energy price rises – though without extending the windfall tax on producers – freezing the average household energy bill at £2,500 a year. She has also signalled a push to extract more gas and oil from the North Sea, accelerate the new licensing of North Sea oil and gas fields, and lift the moratorium on fracking , to try to increase gas production. On Wednesday, the former Conservative environment secretary Lord Deben and Sir John Armitt, who chair the Committee on Climate Change and the National Infrastructure Commission respectively, wrote to Truss warning that ramping up gas production would not solve the problem. They wrote: “The UK cannot address this crisis solely by increasing its production of natural gas. Greater domestic production of fossil fuels may improve energy security, particularly this winter. “But our gas reserves – offshore or from shale – are too small to impact meaningfully the prices faced by UK consumers. ” The letter marks the first time the chairs of the independent advisory bodies have written jointly to a prime minister. Factcheck: why fracking in UK will not reduce your energy bills Read more They advised Truss, along with the incoming chancellor and business secretary, to focus instead on bringing down energy demand from consumers and businesses. “Energy security and reducing the UK’s exposure to volatile fossil fuel prices requires strong policies that reduce energy waste across the economy and boost domestic production of cheap and secure low-carbon energy,” they wrote in the letter, seen by the Guardian. This would necessitate policies such as home insulation , requiring public agencies to improve the energy efficiency of their buildings, setting up an energy advice service for consumers, and increasing renewable energy generation, particularly onshore wind and solar power. “Renewables are the cheapest form of electricity generation. Onshore wind and solar have the potential to be deployed fastest and thus reduce our reliance on natural gas sooner,” they wrote. Truss has said little so far on how she would improve home insulation, as the scrapping of the green homes grant last year has left the UK without a nationwide insulation scheme for those on average incomes. She has vowed to remove green levies , potentially including those that pay for insulation for poor and vulnerable households. Sign up to First Edition Free daily newsletter Archie Bland and Nimo Omer take you through the top stories and what they mean, free every weekday morning Privacy Notice: Newsletters may contain info about charities, online ads, and content funded by outside parties. For more information see our Privacy Policy . We use Google reCaptcha to protect our website and the Google Privacy Policy and Terms of Service apply. During her campaign for the Tory leadership, she also firmly rejected lifting the barriers in the planning system to onshore wind and solar farms. At least 15 million homes require energy efficiency improvements, but the most recent year in which a large number of homes were insulated was 2012. Since then, the “stop-start nature of energy-efficiency policy is hampering development of the supply chain,” the letter said. The Committee on Climate Change warned earlier this year that increasing the production of gas from the North Sea was unlikely to bring down gas prices and could endanger the UK’s target of reaching net zero emissions by 2050. Deben and Armitt wrote that up to three-quarters of UK households are threatened by fuel poverty. “The OBR expects natural gas to remain expensive, at three to four times the average pre-invasion [of Ukraine] price, until 2027. Ninety per cent of the recent increase in the energy price cap is driven by changes in the price of gas. Addressing our dependency on fossil energy offers us the best way out of these crises,” they wrote. “The best policies for the consumer are those that support lasting energy security and a low-carbon, low-cost energy system. The independent analysis of our respective organisations is that this will deliver a long-term return on investment and set the UK on a path to prosperity. ”.
Source:
theguardian
URL:
https://www.theguardian.com/politics/2022/sep/07/gas-drive-will-not-solve-energy-crisis-liz-truss-told
Prev Post
Next Post