Gesink denied by Evenepoel within sight of the line at Vuelta 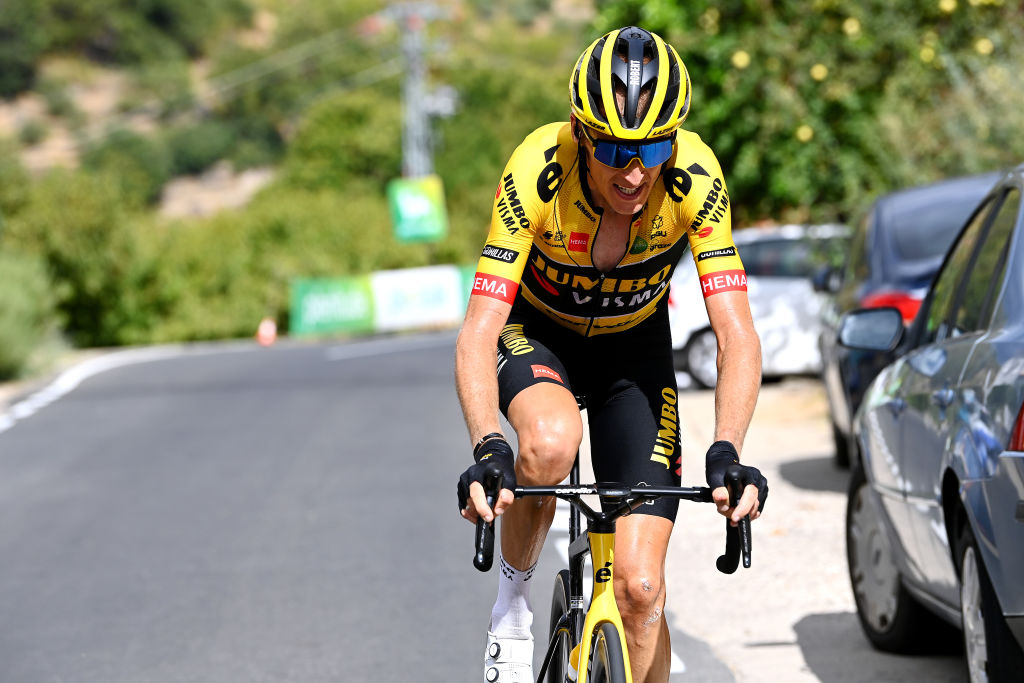 After Primož Roglič crashed out of the Vuelta a España this week, Robert Gesink’s dream of putting a smile back on the faces of his Jumbo-Visma teammates with a long-distance bid for glory fell short within sight of the finish on stage 18. But while an early 38-man break had been winnowed away to leave just Gesink ahead of the field by the upper slopes of El Piornal, the GC battle behind had reached such a level of intensity that it was far from clear that he was going to make it to the line. Finally, in the last kilometre, Vuelta leader Remco Evenepoel (QuickStep-AlphaVinyl) and his closest rival Enric Mas (Movistar) swept past the fading Gesink. But even though he had to settle for third at the finish line, Gesink put a brave face on defeat nonetheless. Read more'Full gas for 100k' - Ayuso closes in on Vuelta podium after Almeida's long-range effort'A new achievement in my life' - Vuelta leader Evenepoel says of summit victoryRemco Evenepoel attacks to win stage 18 at Vuelta a España "Yesterday [Wednesday] was a hard day with Primoz not starting, we all came here to win again with him, and it took me 24 hours to reset” Gesink said afterwards. “But today was really good. I was really happy to be there, although I’d be slightly happier if I won. "One of the taller riders in the peloton, Gesink explained that while other riders could jump away and open up gaps with big accelerations, he essentially had to get his retaliation in first and then time trial up the climb in order to have a chance of winning. “It was a really tough day, at first it took some time for the break to go, and I got through to the group and stayed out of trouble. But if the little guys are always jumping away, I have to go at my own steady pace on climbs, so I went early and then managed to drop the rest. ” Gesink explained. Sports director Grischa Niermann kept him informed of the gaps, he said, but once it got to below a minute, he could see his chances ebbing away. “I looked back and saw a front wheel coming and I knew it was going to be really difficult,” Gesink said. "I did make it in the winner’s picture so that’s quite nice. ”Mas, too, made sure he took an opportunity in the media mixed zone to come over and apologize to Gesink personally for having indirectly scuppered his chances. Gesink, also speaking in English, responded with a cheery, “no worries. ”In many ways, it was logical in many ways that Gesink was in the break for Jumbo-Visma as they try to move on from Roglic’s abandon. With his one Grand Tour stage win to date coming on the Vuelta back in 2016 on the Aubisque, and his one day in the race lead of a Grand Tour coning earlier in this Vuelta, Gesink has always shown strong form in the Spanish race. That was the case again on Sierra Nevada last Sunday when he and Chris Harper were the two top Jumbo support riders for Roglic, so his current condition is also clearly good. Not only that, Gesink is the only Jumbo-Visma rider left in this year’s Vuelta to have been a teammate with Roglic in his three victories in the Spanish Grand Tour from 2019 to 2021. A win for Gesink atop El Piornal would have carried some extra symbolism in that sense. For Gesink, in any case, taking part in a 137-kilometer break represented a return to his roots and fighting for himself rather than having a domestique’s role. So even if he didn’t quite get to say “mission accomplished” at El Piornal, getting so close at least showed he had not forgotten how to do that in style. "It's kind of nice to ride for victory for myself again,” he said. “But I’m not going to say I’m the happiest man on the earth right now. ”.
Source:
cyclingnews
URL:
https://www.cyclingnews.com/news/gesink-denied-by-evenepoel-within-sight-of-the-line-at-vuelta/
Prev Post
Next Post