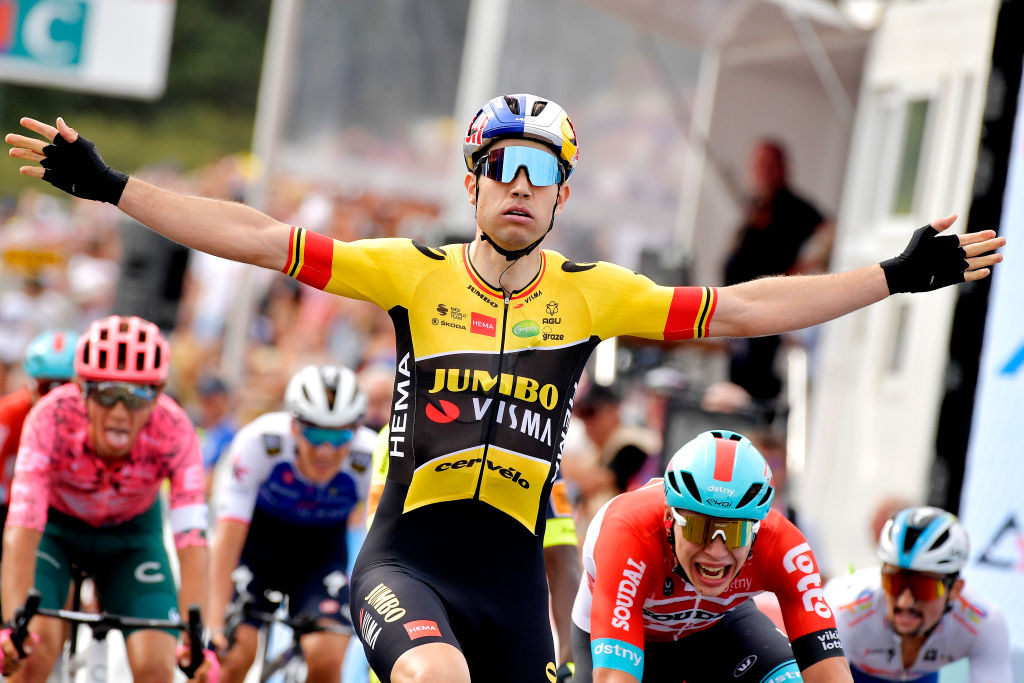 The second act of the Canadian WorldTour races sees Wout van Aert, Tadej Pogačar, Michael Matthews, Peter Sagan, Biniam Girmay and Alberto Bettiol clash at the Grand Prix Cycliste de Montréal on Sunday. It is their final face-off before this year's World Championships in Australia and the hilly Montreal circuit race should give a real indication of their rainbow jersey hopes and each riders' strengths and weaknesses. Their next battle will be on Sunday September 25 as they fight for the rainbow jersey. The many European riders who travelled to Canada for the two races transferred from a misty Québec to Montreal via bus on Saturday morning. They soon got out on their bikes for a ride to shake out their legs and to take a look at the hilly 12. 2km circuit around Parc du Mont-Royal that gives its name to the city. On Friday Benoit Cosnefroy (AG2R-Citroen) surprised everyone with a late solo attack and superb effort to win the Grand Prix Cycliste de Québec. The bigger names were all left to fight for the podium places and regret missing out on victory. Read MoreBenoit Cosnefroy claims solo victory at Grand Prix Cycliste de QuébecMichael Matthews finds consolation in UCI points haul after defeat in QuébecWout Van Aert: Unfortunately cycling is not like a PlayStation game While the Québec race suits the aggressive baroudeur riders like Cosnefroy or fast finishing Classics riders like Matthews, the Grand Prix Cycliste de Montréal is more like an Ardennes Classics and so is expected to produce more open racing and much earlier. The 221. 4km race distance includes 4842 metres of elevation, almost 2000 metres more than the Québec race. The 12. 2km circuit has considerable cycling heritage. It saw Eddy Merckx and Geneviève Gambillon win historic rainbow jerseys at the 1974 World Championships and two years later Bernt Johansson beat Giuseppe Martinelli at the Olympic Games. There was no women’s race while the Soviet Union won the 100km team time trial. Montreal has bid to host the 2026 Road World Championships in the hope of celebrating the 40th anniversary of the 1976 Olympics. The 12. 2km circuit around the Parc du Mont-Royal features three climbs and a short kick up to the finish line, for a total of 263m on each lap. The riders climb for 1. 8km at 8% to the summit of the Côte Camillien-Houde in the centre of the park, then drop down to city streets before climbing the Côte de Polytechnique (780m at 6%, including a portion of 11%). There is a 800-metre kick-up on Boulevard Mont Royal three kilometres from the finish and a sweeping descent and a U-turn into the rising finish straight on the Avenue du Parc. An aggressive finale (Image credit: Getty images) When the race was last held in 2019 before the COVID-19 pandemic, Greg van Avermaet won the dash to the line but only after 30km of aggressive racing and a series of attacks. Dan Martin kicked things off, Nans Peters was also aggressive and were joined by Michael Woods, Enric Mas before Mitchelton-Scott chased them down. Cosnefroy attacked with Tim Wellens on the final lap but Peter Sagan and then Julian Alaphilippe came across to Cosnefroy. However Alaphilippe marked his French rival, allowing a select group to come up to them and for van Avermaet to sprint to victory. The 2019 Grand Prix Cycliste de Montréal remains the veteran Belgian’s last victory. The COVID-19 pandemic forced a two hiatus for the Canadian races and also saw a new young generation of riders emerge. Van Aert finished 13th in Québec on Friday, in the same time as all the best chasers, and so could be a contender on Sunday but he will have to respond to the attacks. Pogačar was caught out of position in the final kilometres in Québec but is looking for revenge and knows the hillier Grand Prix Cycliste de Montréal suits him far better. “The Grand Prix Québec has too little climbing for me but on Sunday in Montréal we will have more metres of climbing to deal with. That should suit me better, it’s similar to what awaits in Wollongong at the World Championships and is an important test for everyone in Canada,” Pogačar said. Van Aert was disappointed to miss out on victory in Québec and clearly wants a morale-boosting victory before he travels on to Australia for the World Championships. “I think it’s a harder race. There’ll probably be more guys like Pogačar and Bardet and Gaudu. The real climbers will come closer to victory there,” he predicted, his incredible talents making him a sprinter, a baroudeur and climber. .
Source:
cyclingnews
URL:
https://www.cyclingnews.com/races/grand-prix-cycliste-de-montreal-2022/elite-men/preview/
Prev Post
Next Post