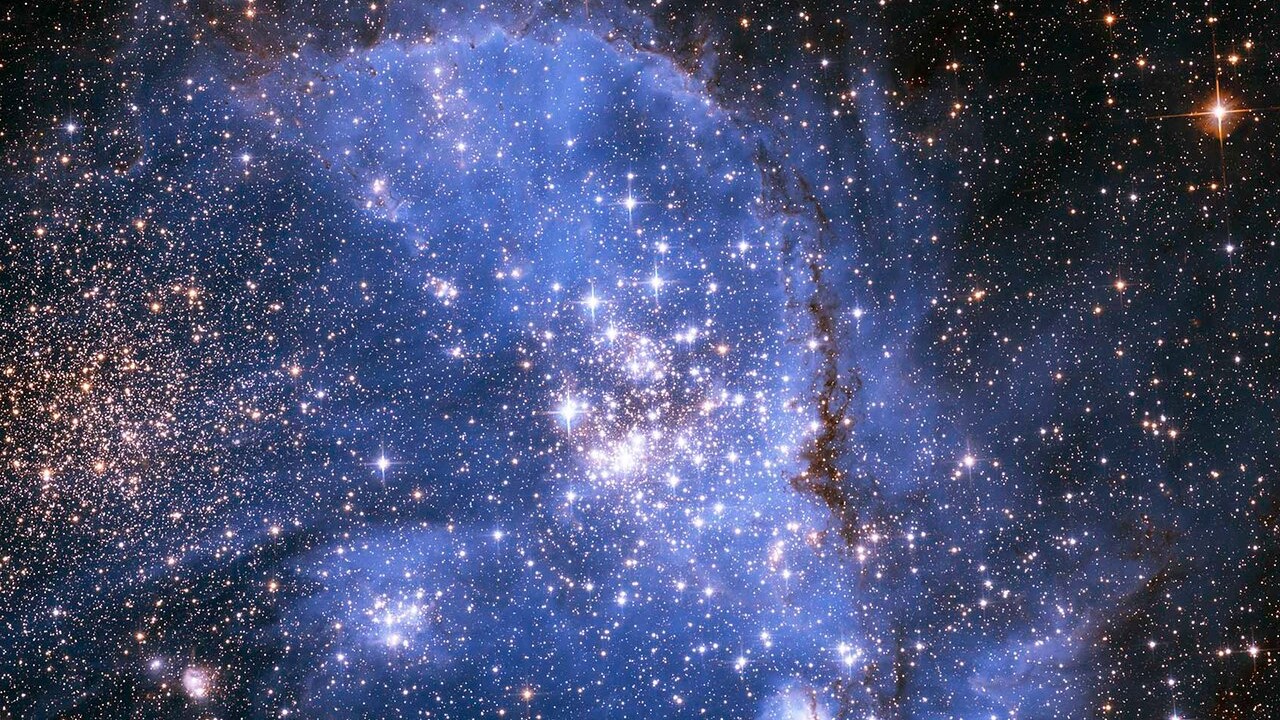 NASA's venerable space telescope has spotted stars and gas spiraling towards the heart of a massive, curiously shaped stellar nursery in the nearby Small Magellanic Cloud. Astronomers think that the outer arm of this spiral of stars and gas could be providing a river-like flow of gas that is fueling star formation in the stellar nursery, called NGC 346, seen in the newly released image captured by the Hubble Space Telescope . The discovery could provide important clues of how stars were born when the 13. 8 billion-year-old galaxy was just a few billion years old and was undergoing a stellar "baby boom" of intense star formation. "Stars are the machines that sculpt the universe. We would not have life without stars, and yet we don't fully understand how they form," Elena Sabbi, study leader and an astronomer at the Space Telescope Science Institute in Baltimore, which manages Hubble, said in a statement . Related : The best Hubble Space Telescope images of all time! "We have several models that make predictions, and some of these predictions are contradictory," she added. "We want to determine what is regulating the process of star formation because these are the laws that we need to also understand what we see in the early universe. " NGC 346 is just 150 light - years in diameter and contains stellar material with a mass equivalent to 50,000 suns. The region has been puzzling astronomers with its intense star formation rate. The Small Magellanic Cloud that houses NGC 346 is located just 200,000 light-years away from Earth, which means that astronomers see younger light than from more distant galaxies that can reveal the early universe . However, the dwarf galaxy is analogous to early galaxies in other ways. The Small Magellanic Cloud has a simpler chemical composition than the Milky Way , just like early galaxies that hadn't yet been enriched with heavier elements by successive generations of stars going supernova, exploding and seeding space with elements they forged during their lives. Because of this chemical simplicity, the stars in the Small Magellanic Cloud are hotter and burn through fuel more rapidly than stars in the Milky Way, meaning they age more quickly than our galaxy's stars. Yet, despite these differences, the researchers discovered that star formation in the Small Magellanic Cloud proceeds similarly to how it does in the Milky Way. To study star formation in the Small Magellanic Cloud, astronomers turned to the Hubble Space Telescope and the Very Large Telescope (VLT) in northern Chile to examine star motion in two distinct ways. Sabbi and her team used Hubble to measure changes in star positions in the galaxy over 11 years. The stars move at a speed of around 2,000 mph (3,200 kph), meaning that over 11 years they shift about 200 billion miles (320 billion kilometers), or just over twice the distance between Earth and the sun. But this is still a tiny distance when viewed from our perch 150 light-years away, meaning it took the power of Hubble to spot and resolve these the stars' tiny shifts in position. Meanwhile a second crew of astronomers led by European Space Agency (ESA) researcher Peter Zeidler used the Multi Unit Spectroscopic Explorer (MUSE) instrument of the VLT to measure the stars' radial velocity, how quickly a star is moving toward or away from the observer. Both methods of observation revealed a spiral of stars feeding into the heart of NGC 346, carrying gas for star formation with them. — Star cluster glitters in new Hubble Space Telescope photo — The Milky Way arches over ESO's Very Large Telescope in amazing panorama — Hubble Space Telescope photo reveals stunning mix of young and old stars "What was really amazing is that we used two completely different methods with different facilities and, basically we came to the same conclusion independently," Zeidler said in the same statement. "With Hubble, you can see the stars, but with MUSE we can also see the gas motion in the third dimension, and it confirms the theory that everything is spiraling inwards. " Zeidler also explained the significance of the spiral formation to star birth. "A spiral is a really good, natural way to feed star formation from the outside towards the center of the cluster," he explained. "It's the most efficient way that stars and gas fuelling more star formation can move towards the center. " The team's research was published Thursday (Sept. 8) in The Astrophysical Journal . Follow us on Twitter @ Spacedotcom and on Facebook . .
Source:
space
URL:
https://www.space.com/hubble-space-telescope-star-formation-spiral-photo/
Prev Post
Next Post