In Photos: Breathtaking Views As Famous ‘Harvest Moon’ Wows Moon-Gazers Across The World 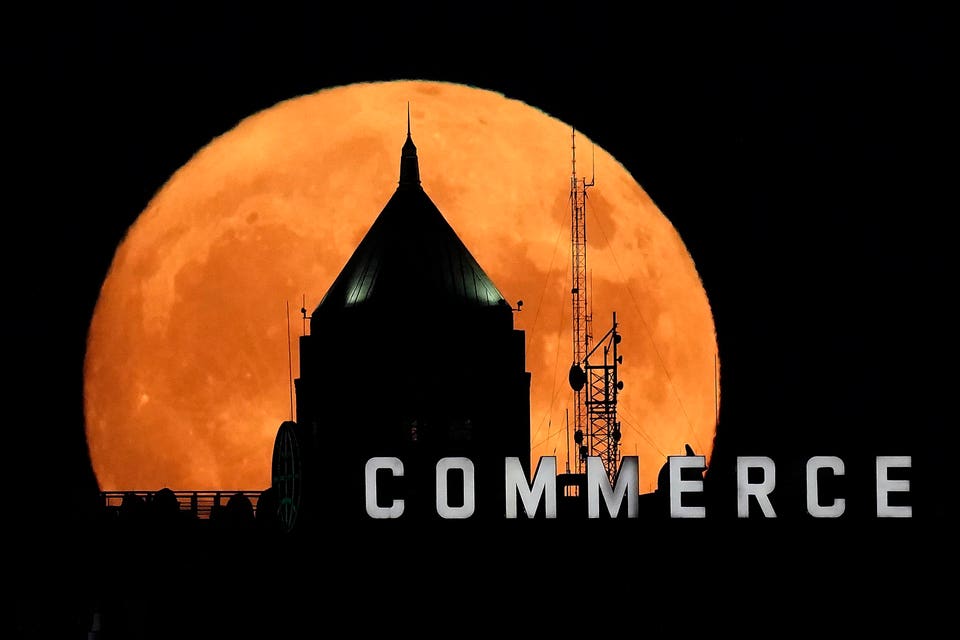 Science In Photos: Breathtaking Views As Famous ‘Harvest Moon’ Wows Moon-Gazers Across The World Jamie Carter Senior Contributor Opinions expressed by Forbes Contributors are their own. I inspire people to go stargazing, watch the Moon, enjoy the night sky Following New! Follow this author to stay notified about their latest stories. Got it! Sep 10, 2022, 08:00pm EDT | New! Click on the conversation bubble to join the conversation Got it! Share to Facebook Share to Twitter Share to Linkedin The full harvest moon rises behind downtown buildings, Friday, Sept. 9, 2022, in Kansas City, Mo. . . . [+] (AP Photo/Charlie Riedel) Copyright 2022 The Associated Press. All rights reserved Did you see the “Harvest Moon?” Once of the most iconic full Moons of the calendar year, September’s Harvest Moon was best seen at moonrise on the evening of Saturday, September 10, 2022. For some of the appearance of a gorgeous orangey orb in the east in dusk was tinged with sadness coming just days after the second delay in a week to NASA’s Artemis I mission to the Moon. This delay could be a long one . A full "Harvest Moon" rising over Cardiff, Wales while 99. 6% illuminated on Saturday, September 10, . . . [+] 2022. Jamie Carter A full Moon is the phase of our natural satellite in space when it is fully illuminated by the Sun from our point of view on Earth. The last full Moon of the northern hemisphere’s summer season, the Harvest Moon rose in the east just after sunset, shone brightly all night and set in the west close to sunrise. A full "Harvest Moon" rising over Cardiff, Wales while 99. 6% illuminated on Saturday, September 10, . . . [+] 2022. Jamie Carter MORE FOR YOU New Research Finds A Connection Between Domestic Violence And These Two Personality Disorders This Scientist Helps Andean Forests And Ecuador’s Women In STEM Exceptional Fossil Preservation Suggests That Discovering Dinosaur DNA May Not Be Impossible The Harvest Moon is one of the most well-known full Moons of the entire year, perhaps because its name is used across the northern hemisphere where crops are being harvested at this time of year. The full "Harvest" moon rises behind a neon-lit crucifix in the neighbourhood of Beit Hanina in . . . [+] Israeli-annexed east Jerusalem on September 10, 2022. (Photo by AHMAD GHARABLI / AFP) (Photo by AHMAD GHARABLI/AFP via Getty Images) AFP via Getty Images The Harvest Moon is always the closest full Moon to the fall equinox, which will occur at 01:04 UTC on September 23, 2022. It marks the point when the midday Sun is directly above the equator, giving every location on the planet 12 hours of daylight and 12 hours of darkness. TOLEDO, SPAIN - 2022/09/09: The full Harvest Moon rises over wind turbines of a wind farm with a . . . [+] recently harvested wheat field bellow. Wind energy has been the first source of electricity generation in Spain in the past year according to The Spanish Wind Energy Association (AEE). (Photo by Marcos del Mazo/LightRocket via Getty Images) LightRocket via Getty Images What was unique about this weekend’s Harvest Moon was that it shone just under 3° from Neptune, allowing those with binoculars to try for a glimpse of the eighth planet from the Sun. People watch the full moon on the observation deck of Roppongi Hills Mori Tower, during a . . . [+] harvest-moon viewing event in Tokyo on September 10, 2022. (Photo by Philip FONG / AFP) (Photo by PHILIP FONG/AFP via Getty Images) AFP via Getty Images Tonight—Sunday, September 11, 2022—look to east an hour after sunset tonight see a by now 96%-lit waning gibbous Moon about 4º below a very bright planet Jupiter. The giant planet will reach its annual “opposition” in a few weeks, which is when it will shine at its brightest of the year. NEW YORK, NY - SEPTEMBER 10: The full Harvest Moon sets behind the Statue of Liberty as the sun . . . [+] rises on September 10, 2022, in New York City. (Photo by Gary Hershorn/Getty Images) Getty Images Although the Moon waxes and wanes in brightness, it’s always orange as its rises and sets. That’s down to “Raleigh scattering. ” Long wavelength red light travels more easily through Earth’s atmosphere than short-wavelength blue light, which strikes more particles and gets scattered. The full harvest moon rises behind downtown buildings, Friday, Sept. 9, 2022, in Kansas City, Mo. . . . [+] (AP Photo/Charlie Riedel) Copyright 2022 The Associated Press. All rights reserved So a rising full Moon look orange because you’re viewing it through a lot of atmosphere—for the same reason a setting Sun looks reddish. The next full Moon is the “Hunter’s Moon” on Sunday, October 9, 2022. After that it’s the “Beaver Moon” on Monday, November 8, 2022. That full Moon will drift into Earth’s shadow in space causing a total lunar eclipse. The full Moon will consequently turn a reddish color for 84 minutes. You don’t need any special equipment to see a full Moon—your own unaided eyes are perfect. However, if you do have a a pair of binoculars then get them ready for a stunning close-up. You’ll see it more easily if you get somewhere high-up, or on a beach with a clear view of the horizon. Wishing you clear skies and wide eyes. Follow me on Twitter or LinkedIn . Check out my website or some of my other work here . Jamie Carter Editorial Standards Print Reprints & Permissions.
Source:
forbes
URL:
https://www.forbes.com/sites/jamiecartereurope/2022/09/10/in-photos-breathtaking-views-as-famous-harvest-moon-wows-moon-gazers-across-the-world/
Prev Post
Next Post