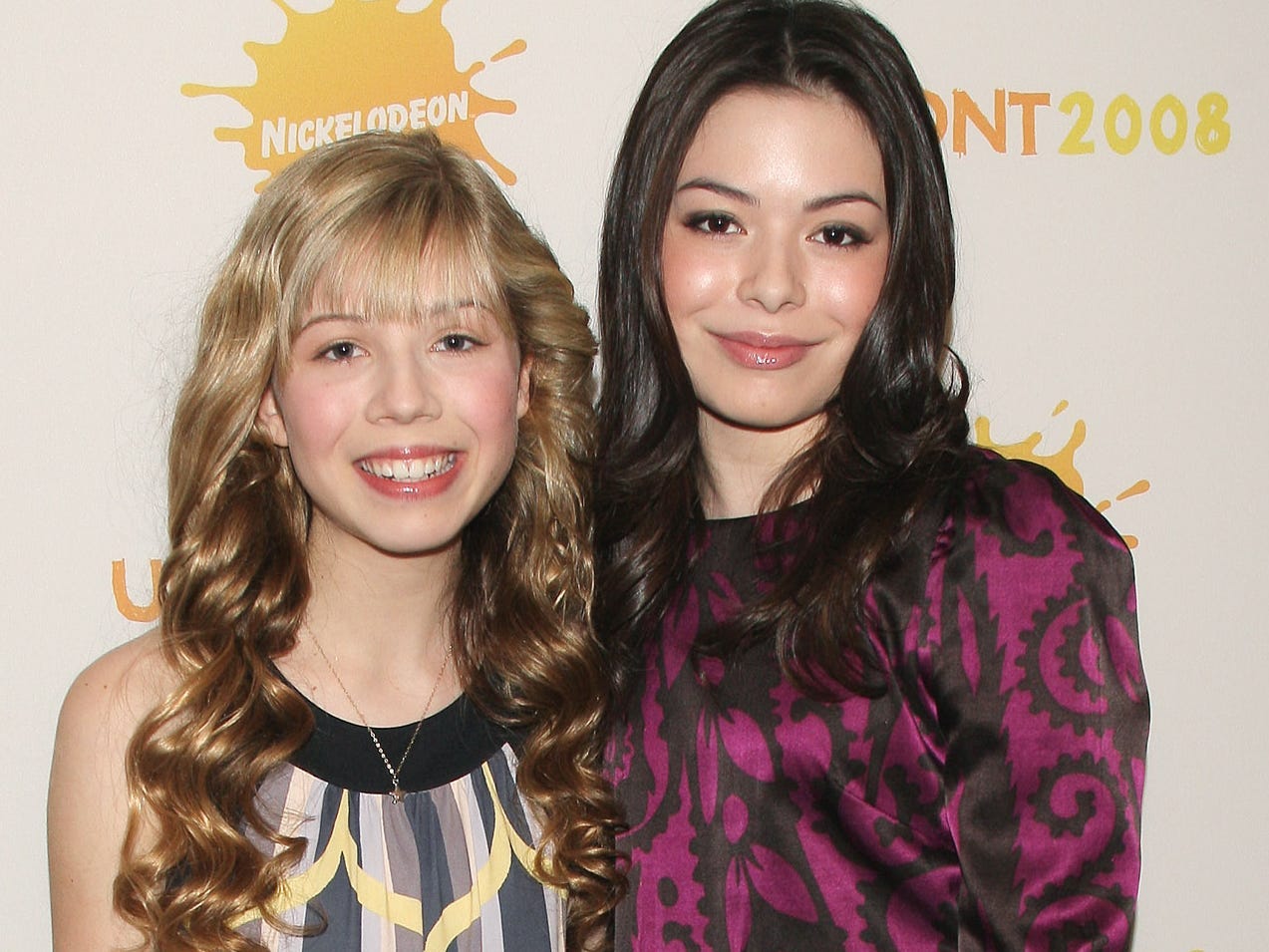 Jennette McCurdy and Miranda Cosgrove in March 2008. Scott Gries/Getty Images for Nickelodeon Jennette McCurdy spoke about her friendship with "iCarly" costar Miranda Cosgrove in her new memoir. McCurdy said that her mom warned her about befriending Cosgrove "because she doesn't believe in God. " Regardless, the two actors became friends, even after "iCarly" ended its original run in 2012. Jennette McCurdy said that her mother discouraged her from befriending "iCarly" costar Miranda Cosgrove because she "doesn't believe in God. "In her new memoir titled "I'm Glad My Mom Died," released on Tuesday, McCurdy detailed being raised in a Mormon household, how her mom Debra McCurdy pushed her into acting at 6 years old, and how her life changed when she was cast as Sam Puckett in Nickelodeon's "iCarly. "The hit sitcom, created by Dan Schneider, ran for six seasons between 2007 and 2012. McCurdy and Cosgrove starred as best friends Sam and Carly Shay, respectively, who launched a successful web show with their pal Freddie Benson (Nathan Kress).  Jennette McCurdy, Miranda Cosgrove, and Nathan Kress in season one of "iCarly. "NickelodeonMcCurdy recalled meeting Cosgrove at her screen test for "iCarly" and immediately thinking the "Drake & Josh" alum was much cooler in comparison to her.  "She was leaning against a wall, sipping Coke from a glass bottle and texting on her Sidekick," McCurdy wrote.  McCurdy said that she and Cosgrove didn't talk much while shooting the pilot, though they were friendly with each other. But when Cosgrove sent her a gift basket with movie-theater candy and a $100 gift card for Arclight Theatre, she was moved. "I'm really surprised that another child actor would be so nice to me," McCurdy recalled. "Usually there's such a sense of competition. This gesture is the opposite of that. I'm touched. "Whereas Cosgrove seemed to be independent, McCurdy was constantly monitored by her overbearing mother who taught her to become anorexic at 11 years old and was critical of her acting.  "On set, Miranda said cuss words like 'shit' and 'ass,' and she took the Lord's name in vain at least 50 times a day," McCurdy wrote in her memoir. "Mom warned me not to get too close to Miranda because she doesn't believe in God. (Nathan is OK for me to get close to, Mom says, because he does. 'Southern Baptists are no Mormons, but at least we've got Jesus in common. )" "Even though Mom said not to get close to Miranda, I really wanted to," she continued. " I wanted some of her coolness to rub off on me. And she seemed nice too, which is hard to be if you're cool. I had my fingers crossed that somehow, despite our mutual shyness, a friendship between us would develop. "Jennette McCurdy, Nathan Kress, and Miranda Cosgrove in season one of "iCarly. "NickelodeonTheir friendship eventually grew over the instant-messaging service AIM. "Miranda and I spent hours talking every day on it," McCurdy said. "Sometimes if Mom walked past and asked me what I was doing, I'd tell her I was talking to Miranda, but most of the time I'd shrink the AIM text bubble, lie, and say I was doing schoolwork. She didn't question me. She'd leave the room and then I'd pull the text bubble back up and start laughing. ""Even though in person Miranda seemed shy and quiet, she had a distinct and hilarious personality through her written words," she added. "So many of the things she said made me laugh. Her way of observing things — people, habits, human nature. I loved her. And I was so excited we were becoming friends. "McCurdy feared that their friendship would dissipate once "iCarly" concluded, but in her memoir, she said that their bond became "stronger. "McCurdy said that three years after the show ended, her friendship with Cosgrove was "a source of camaraderie and emotional support. " She also said that Cosgrove was "very supportive" of her eating disorder recovery. The actress said that they "drifted apart" in more recent years, but Cosgrove did reach out to her about joining Paramount+'s "iCarly" revival series. McCurdy, who quit acting several years ago, declined reprising her role in order to prioritize her "mental health and happiness. "Read the original article on Insider.
Source:
insider
URL:
https://www.insider.com/jennette-mccurdy-miranda-cosgrove-friendship-mom-warned-her-memoir-2022-8
Prev Post
Next Post