Khandu Appreciates Teachers For Their Contributions To State 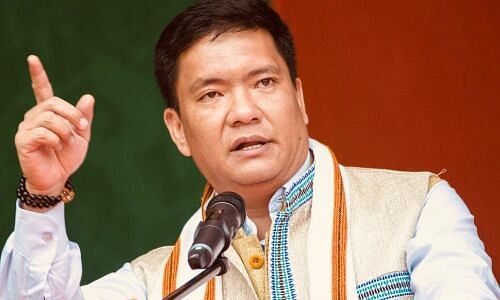 CORRESPONDENTITANAGAR, Sept 5: Arunachal Pradesh Chief Minister on Monday commended the role of teachers in shaping the future generation of the state, especially those posted in interior places. Attending the Teachers' Day celebration here, the chief minister expressed gratitude to the teachers for imparting quality education to students despite facing several hardships in terms of facilities. "Though Arunachal Pradesh has been a late starter in almost all sectors, including education, the contribution of our teachers in making education a vibrant sector is immeasurable," he said. Khandu pointed that the role of teachers has increased manifold in modern times due to advent and influence of internet with its easy accessibility. "We cannot avoid the influence of internet on a student's formative years but as teachers we can sure guide them to use the web for positive development and knowledge gain," he said. Citing lack of adequate infrastructure in several schools of the state, the chief minister said that under the National Education Policy, the state government is committed to rebuild all dilapidated schools and provide basic facilities for students as well as teachers so that they can concentrate on quality education. He informed that rebuilding and refurbishing exercise of schools have already begun in a phased manner and that by 2030 all required infrastructural requirements would be fulfilled. He asked the Chief Secretary Dharmendra to call upon the deputy commissioners and deputy directors of school education (DDSEs) to take stock of each school in their jurisdiction and submit the reports to the government for further action. On complaints of shortage of teachers in the state, Khandu revealed that there are 3600 government and government aided schools in the state as of date with 16000 teachers. He summarized that if posting of teachers is rationalized there would be adequate number of teachers for all schools. While directing the education department to evolve and implement a robust mechanism for rational transfer and posting of teachers, Khandu urged the Arunachal Teacher's Association (ATA) to cooperate and assist in the department's endeavor in this regard. He, however, informed that the state government has already approved recruitment of sufficient number of teachers through the state public service commission to meet the demand. On poor management of schools, especially in rural areas, Khandu advocated reviving the system of school management committees involving local community members. He viewed that earlier schools were looked after by village community members that ensured proper functioning of the schools. Meanwhile, Khandu informed that the lone Arunachal State University at Pasighat will start functioning from this year. The Chief Minister on the occasion, also gave away the state awards to 31 selected teachers working in government and government-aided schools in various parts of the state for their meritorious service in imparting quality and moral education to the students. Also Read: Assam: BJP Worker Murdered in Sootea, Body Found in PondAlso Watch: .
Source:
sentinel
URL:
https://www.sentinelassam.com/north-east-india-news/arunachal-news/khandu-appreciates-teachers-for-their-contributions-to-state-611311
Prev Post
Next Post