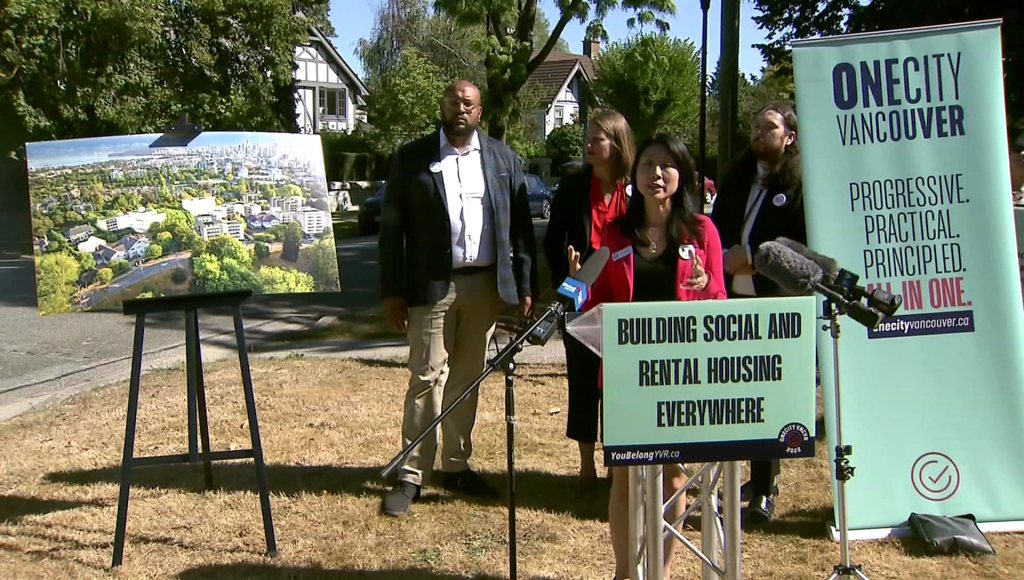 A municipal party in Vancouver is promising to end a ban on where six-storey rentals can be built, allowing social and rental stock everywhere. OneCity Vancouver candidates rolled out the party’s campaign Tuesday, promising housing in every neighbourhood done with a faster approval process, and no public hearings. Iona Bonamis, OneCity Vancouver city council candidate, says the current zoning bylaws are restricting renters and other people from living on quieter, leafy streets in Vancouver. “Instead they’re forced onto busy arterial polluting streets,” the senior transport planner said. Related Articles: Squamish Nation receives $1. 4B loan for 3,000 rental homes from Canada ABC Vancouver wants body cams for officers NPA facing major criticism for ‘homophobic’ candidate “We have even envisioned some six-storey buildings that would replace some of the Single-Family homes and would allow many more households to live on a single piece of property,” she said of the party’s pro-housing mandate. Originally designed for the wealthy, Vancouver’s Shaughnessy neighbourhood is one of Vancouver’s oldest, and has some of the city’s most expensive properties and heritage homes. If OneCity’s platform came true, the look of Shaughnessy and the people who live there would change. “I’m sure there are going to be some people who will only see the downsides to a denser and healthier city. But I think there are a lot of people who are going to welcome having more people when they walk down the street,” OneCity candidate Ian Cromwell said, adding changes to neighbourhoods will combat social isolation and diversify the areas. OneCity Vancouver candidates rolled out the party’s campaign Tuesday, promising housing in every neighbourhood done with a faster approval process, and no public hearings. (CityNews) Last November, the City of Vancouver started coming up with ways to build rental units off major arterial routes. “There are readily available public health data that shows that domiciling people immediately beside highways and heavy use arterials result in long-term health impacts,” Kit Sauder, co-chair of the renter’s advisory committee at the City of Vancouver, said. Sauder says a lack of housing supply prevents Vancouver from confronting its overlapping crises. “We’re facing a future as a city of mansion districts and government housing for a permanent underclass. And no one is comfortable with that. But neighbourhoods that have mixed income are substantially more vibrant, substantially healthier, they provide vastly more opportunity and greater resiliency for the city as a whole,” Sauder explained. Meanwhile, the other leading parties’ housing policies differ substantially. ABC Vancouver wants to triple the number of housing starts and streamline permitting, while mayoral candidate Colleen Hardwick of the TEAM party criticizes OneCity’s policy, saying in a statement it “would remove any semblance of a voice for neighbourhoods in the development process. ” Incumbent Mayor Kennedy Stewart’s party touts the mayor’s track record in speeding up rental builds and strengthening tenant protections. .
Source:
citynews1130
URL:
https://vancouver.citynews.ca/2022/09/06/onecity-vancouver-housing-platform/
Prev Post
Next Post