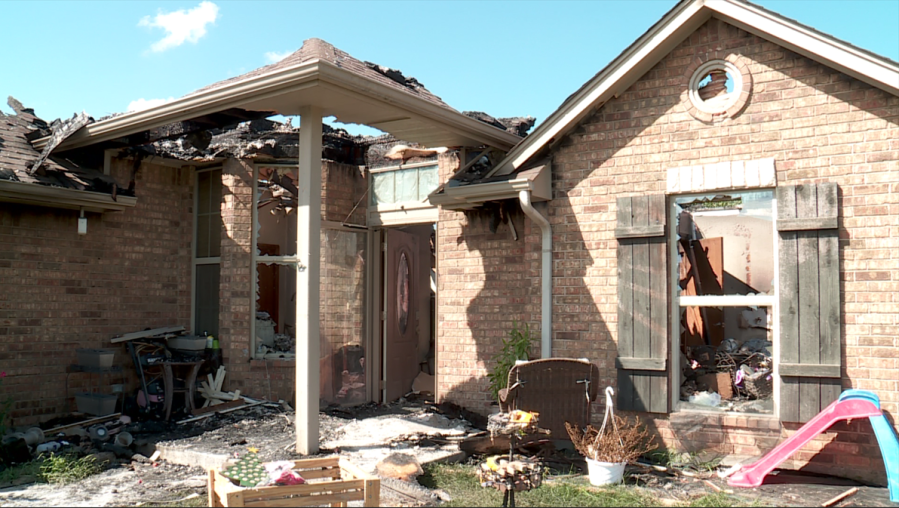 MCLOUD, Okla. (KFOR) – A local pastor and his family are trying to clean up after their parsonage caught fire minutes before starting his Sunday sermon. “I don’t know how people don’t have a church family,” said Susan Tibbits, the preacher’s wife. While the rest of the Tibbits were at the Church of Christ of McLoud on Sunday, Susan was home sick. “I woke up to a bang,” said Susan. “It was actually my windows bursting out. ” Moore Police investigate deadly weekend crash She left her room to find the back of the house was on fire. The family believes the flames started from a pellet grill on the back porch. She quickly got dressed, and grabbed some items, before running out the door. “I headed over to the church and pretty much interrupted and told them the house was on fire and everybody came over,” said Susan. Courtesy: Chad Seaton Douglas Tibbits was only minutes away from preaching to the congregation. “A man came up to me and said ‘Your house is on fire,’” said Douglas. “Then he took off running,” said Susan. Peeping Tom caught on camera in Edmond neighborhood The flames quickly began to spread to the entire home. It was a total loss. Courtesy: Douglas Tibbits The parsonage isn’t just home to Susan and Douglas. Their son, daughter-in-law, and their four young granddaughters live with them while they close on a new house in Elk City. Tibbits family They kept all of their prized possessions with them in the parsonage, while putting the rest in storage. “We lost some of their favorite stuffed animals and stuff. Lots of their favorite toys that they played with everyday,” said Brandon, Susan and Douglas’s son. “I have never before cried over a stuffed monkey, because it was just her favorite doll. ” “I have a ton of matching clothes of all of my girls. And it took a long time to find all that. But it’s okay,” said Rachael Tibbits, Brandon’s wife. Also lost, nearly a dozen little lives. Courtesy: Douglas Tibbits “All 11 of our dog, Roxy… her puppies died in the fire because it started out back,” said Rachael. Thankfully, the momma dog and a cat escaped. Former Norman High teacher receives hundreds of vulgar messages and death threats after a Sec. of Education tweet Meanwhile, the Tibbits continue to search for anything they can salvage in the ash. “It’s hard because everything’s black, and it’s just like digging though sand trying to search for a diamond,” said Douglas. “There was one paitning that my grandfather painted that was an oil painint. Her mom has a wedding ring in there. ” Despite the devastating loss, the pastor and his family are still counting their blessings. Their church family didn’t skip a beat. Immediately buying them the necessities they need, along with new toys for the grandchildren and food. “Just about everyone in the congregation handed me money,” said Douglas. “They went and got us meals. ” “They’ve put us up in a hotel. They have gotten us what we needed,” said Susan. “I’m sure we have a long way to go, but we just appreciate everything everybody has done for us. ” The congregation has set up a GoFundMe for Susan and Douglas, as well as a GoFundMe for Brandon and Rachael. The Tibbits said the church plans to rebuild, but it will take a couple of years. In the meantime, the Tibbits are still figuring out a place to stay. .
Source:
kfor
URL:
https://kfor.com/news/local/mcloud-preacher-and-family-homeless-after-sunday-house-fire/
Prev Post
Next Post