NEET PG counselling likely from September 19, NExT unlikely in 2023: All that this doctors' delegation discussed with DGHS 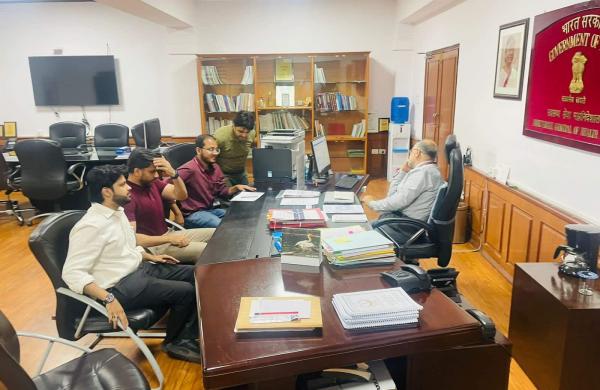 Presently, NEET-PG Counselling, NExT, and mental health of doctors are the trending issues among the medical fraternity. Top executives from the Federation of All India Medical Association (FAIMA), along with doctors from AIIMS (All India Institute of Medical Sciences) and RML (Dr Ram Manohar Lohia Hospital) Delhi met with the Director General of Health Services (DGHS) on Monday, September 5, to discuss the issues. The DGHS informed them that NEET PG counselling, which was delayed initially, will be held after two weeks, most likely on September 19. Also, it is unlikely that NExT exam, the National Exit Test (NeXT) which was proposed to replace both NEET PG exam and Foreign Medical Graduate Examination (FMGE), will be conducted in the year 2023. Ailing mental health of medicos Mental health was discussed on priority, Dr Rohan Krishnan, President of FAIMA, who was present in the meeting, says. He states that the issue of a doctor’s suicide at Delhi’s Safdarjung Hospital was highly concerning. In a letter submitted to DGHS, MoHFW (Ministry of Health and Family Welfare) and GoI (Government of India), it is mentioned that top medical institutions of the country including AIIMS, JIPMER and BJMC have reported similar cases. The association requested that the mental health issues faced by doctors due to, “overwork, lack of support, proper meals and rest” be addressed at the earliest. “An open dialogue delivery system was proposed,” said Dr Krishnan, and added, “A system where students can freely discuss their issues with the authorities should be in place. ” He stated that student organisations should work closely with the administration on these issues. “If a student is stressed, overwhelmed, is a victim of ragging or is being harassed by a fellow student, seniors or even a faculty member, he/she should be able to openly discuss it with the administration,” he said. A mentorship system in which a faculty member is appointed for a few residents and a resident is appointed for a few students to discuss issues like these was also proposed. Dr Krishnan suggested that counselling sessions should be scheduled for students at regular intervals. The FAIMA letter additionally states that the NMC's suggestion regarding the provision of weekly offs and leaves during the residency periods should be implemented soon. Reducing the workload on the interns and resident doctors, fixed working hours, mental health awareness programmes and recreational sports were also suggested to address problems of mental health. NEET PG counselling The delegation requested for NEET PG Counselling to be expedited. Officials from the MoHFW informed them that it would be started soon. FAIMA had submitted a letter to DGHS and MohFW regarding this issue earlier on August 31. The counselling was delayed due to NMC deciding to add more medical seats for the current academic year. “Yesterday, the DGHS informed us that the inspection of colleges for this process was done. Mapping and enabling the new seats on the NMC website is to be done and after that, the counselling would begin,” Dr Krishnan informed. He said that the officials has assured them the process would take a week to ten days time and the counselling would start in about two weeks, most probably on September 19. The NExT exam question “The DGHS told us that the NExT exam was very unlikely to happen in the year 2023,” said the FAIMA President. “Additionally, as per the data we have and the input we have received from other sources, we are quite sure that the Ministry is in not in the condition to conduct the NExT exam in the coming academic year,” he stated. .
Source:
edexlive
URL:
https://www.edexlive.com/news/2022/sep/06/neet-pg-counselling-likely-from-september-19-next-unlikely-2023-doctors-delegation-dghs-30885.html
Prev Post
Next Post