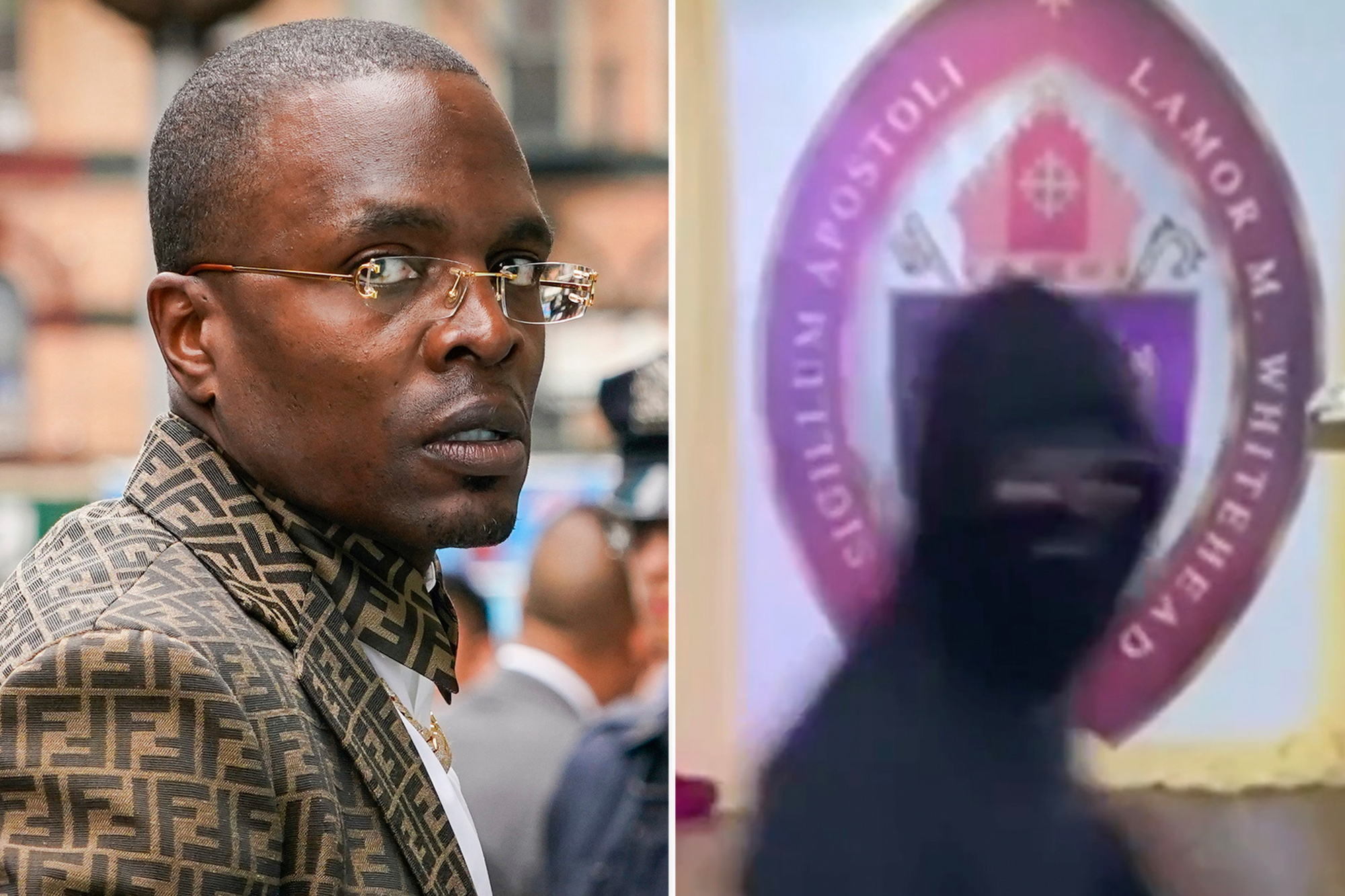 Flashy Brooklyn Bishop Lamor Miller-Whitehead, who was robbed of more than $1 million in jewelry in a caught-on-video heist at the pulpit, has filed twin $20 million lawsuits against two doubting Thomases. The separate defendants are a YouTuber named Jives with more than 80,000 subscribers and another online personality, Larry Reid. Both men publicly claimed Whitehead was a scammer, among other things, leading the plaintiff to lose “business deals, church members, and income,’’ the suits say. Jives — whose full name is Demario Q. Jives — claimed on his YouTube channel last month that Whitehead “is wearing the same jewelry that [he] got robbed in,” according to court papers filed in Bell County, Texas, on Friday. Jives also allegedly accused Whitehead of “drug dealing” and collaborating with “the Bloods and Crypts. ” The YouTuber’s comments were “all false,” defamatory and slanderous, says the suit, which is seeking “no less than $20,000,000 or such other amount to be prove at trial. ” Meanwhile, Reid “wrote online that Bishop Whitehead ‘scammed people out of money,’ ” says the other suit, filed in Lee County, Fla. Reid also allegedly said online that Whitehead “will be locked up in about three months,” after the Gucci-loving Brooklyn bishop was robbed at gunpoint during the livestreamed service in July. Whitehead says in his suit against Reid that the statements are false and “exposed Plaintiff to public contempt, ridicule, aversion, and/or disgrace. ” The bishop is seeking the same $20,000,000 in damages “or other such amount” in his suit against Reid. Stay up on the very latest with Evening Update. Please provide a valid email address. By clicking above you agree to the Terms of Use and Privacy Policy . Thanks for signing up! Never miss a story. Whitehead, who has an alleged history of grifting and served time in prison for identity theft and grand larceny, lost more than an estimated $1 million in jewelry in the July 24 crime. The gold-and-gem-dripping clergyman — who tools around in luxury vehicles such as a Rolls Royce — has battled back against critics who claim his high-flying lifestyle made him a target for crooks. The robbers’ haul included a $75,000 Rolex watch, $75,000 Cavalier watch and several crosses worth tens of thousands of dollars a pop. The thieves have yet to be caught. Jives fired back at Whitehead’s lawsuit Monday. “I’m a commentator,” Jives said to The Post. “I give commentary on religion, politics, public figures, everything. … We make a lot of jokes, especially about this particular situation, because this guy really is a joke. So for him to try to even file something is egregious. “He’s mad because people he’s getting backlash, and I’m like, ‘Dude, you’re doing all this talking about a robbery. Who else in the world is out here having interviews about being robbed?’ ” Reid called Whitehead’s suit “absurd and unfounded. “The key thing about a defamation lawsuit is you’ve got to show a loss, and you’ve also got to show malicious intent. I just stated what every other outlet stated, so he should be suing them as well,” he said. “There’s no good reputation to defame. He has no case. ” Whitehead’s lawyer, Brian Ponder, told The Post, “The defamatory statements that are being made are affecting the bishop’s business and church and professional duties, so he’s going to very aggressively hold those people accountable that are behind it. “This is the beginning of that process of dealing with those actors maliciously stating falsehoods about the bishop,” the lawyer said, adding that there would be “many more” similar lawsuits coming. .
Source:
nypost
URL:
https://nypost.com/2022/09/05/nyc-bishop-lamor-miller-whitehead-sues-men-who-claimed-hes-scammer-after-1m-robbery/
Prev Post
Next Post