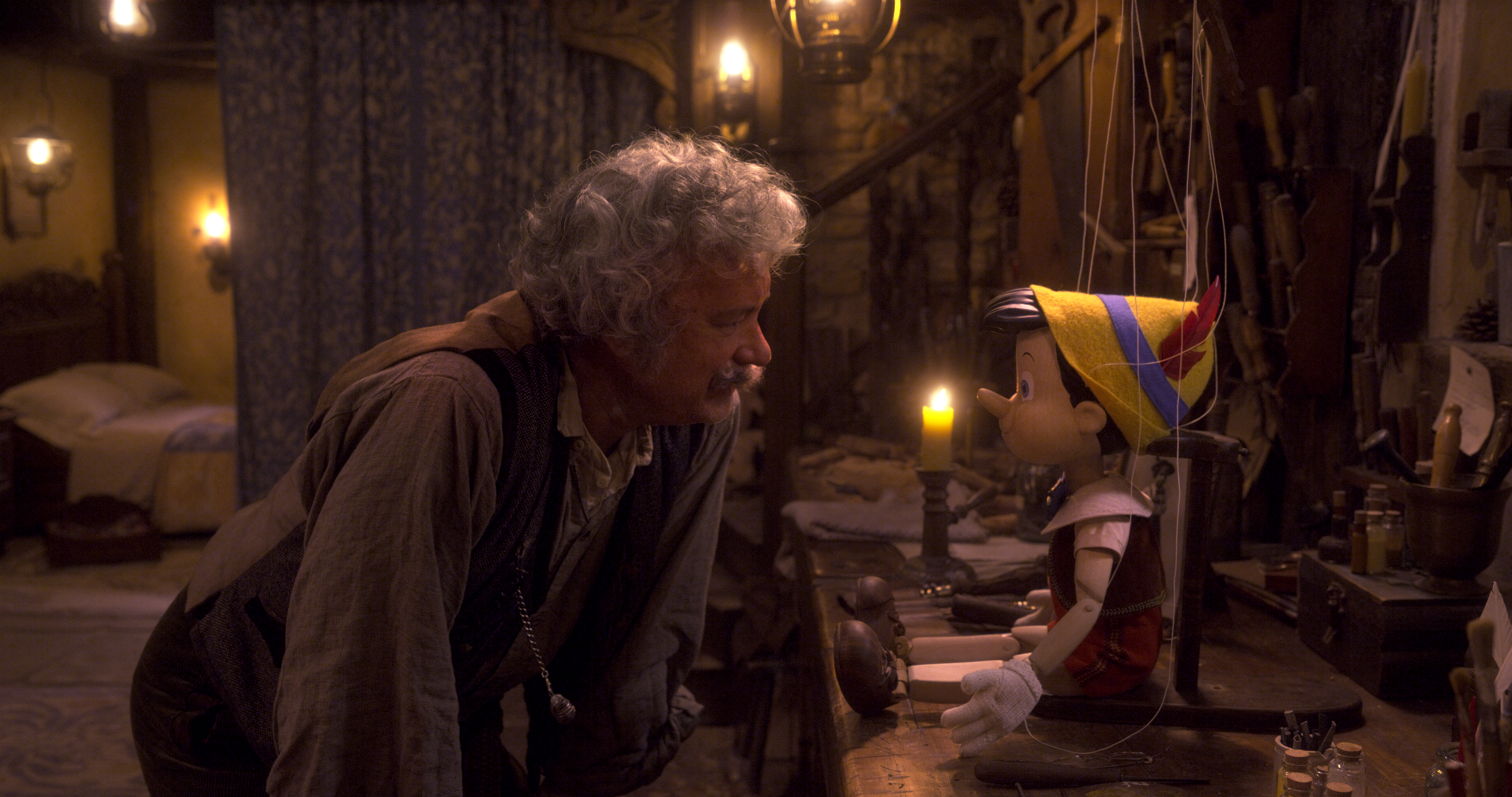 Tom Hanks enters the grandfather stage of his career (Picture: Disney) Disney is back with its latest live-action remake, reaching far back into its archives to 1940 to re–do Pinocchio with a Tom Hanks-shaped cherry on top. It’s perhaps the most reasonable and yet also one of the riskier remake moves so far. Yes, the studio is showing no signs in letting up with its relentless campaign of ‘re-imagining’ its past successes, from Aladdin to Beauty and the Beast and The Jungle Book. Often these second takes don’t offer much else to the story and pale in comparison to the original. However, sometimes they work as reasonable companion pieces, such as Kenneth Branagh’s Cinderella. With Pinocchio, over 80 years has passed since Disney released its first effort, the studio’s second-ever film following Snow White and the Seven Dwarfs (that remake’s currently shooting). For some, it’s a childhood classic, still scaring unsuspecting children – but it’s also a fair bet that many haven’t seen it at all. This is likely one of the more genuine examples of how a new version introducing its young audience to the story could inspire them to seek out the original afterwards. In that regard, there’s some spice to pep Pinocchio up for modern viewers but Disney has kept the animation’s hallmarks in place as an appropriate tribute – Pinocchio’s iconic design, down to the feather in his cap? Check. Cleo the playful kitten and Cleo the sassy goldfish? Check. And Tom Hanks not only providing undeniable screen presence as always, but genuinely looking like the 1940 Geppetto come to life? Double check. Disney sticks very close to their 1940 original (Picture: Disney) In the woodcutter’s lovingly crafted workshop, there’s even a bounty of Disney Easter eggs to be found among his clocks. The film carves out a bit of time to expand Geppetto’s tragic backstory, assisted by Hanks on about 75% battery and with a wavering Italian cartoon voice – but it’s an easy way for the actor to launch the grandfather stage of his career. Of course, Hanks is the big draw here but it’s actually the supporting talent that truly shine with Cynthia Erivo on hand as a sparkling Blue Fairy. Although you don’t get her for long, she sells an earnest and old-fashioned role well with a bit of added zing and, of course, the pipes to beautifully deliver the Disney company’s trademark song, When You Wish Upon A Star (no pressure, right?). Benjamin Evan Ainsworth also does well with an energetic but not over-the-top expressive delivery as the titular marionette. Cynthia Erivo dazzles as the Blue Fairy, what little we see of her (Picture: Disney) Besides her, it’s the villains that eat up the screen as they menace Pinocchio, with Keegan-Michael Key clearly having a whale of a time as ‘Honest’ John, keeping in the tradition of excellent Disney foxes. His rich, distinct voice works perfectly for both the spoken lines, with a few new jokes (hi Chris Pine) and his gleeful rendition of Hi-Diddle-Dee-Dee (An Actor’s Life For Me), whereas Joseph Gordon-Levitt has a trickier time nailing Jiminy Cricket’s singular vocal style without sometimes grating, as well as suffering from quite alienating CGI design. Luke Evans gives it gusto too in fake teeth as he tears into the expanded role of the Coachman, complete with show-stopping new song The Coachman to Pleasure Island, working to pressure Pinocchio away and into bad behaviour. Pinocchio falls foul of the flamboyant ‘Honest’ John (Keegan-Michael Key) (Picture: Disney Plus) Disney has avoided adding too much extra padding to a lean original story, other than an unoriginal and unnecessary sub-plot with puppet Sabina (Jaquita Ta’le) and Stromboli show puppeteer Fabiana (Kyanne Lamaya). However, the licence it gives itself to expand the temptations of Pleasure Island – carefully framed around sugar over smoking and drinking as in the 1940 cartoon – results in a visual treat. The terror is turned down a notch too, although Lampwick’s transformation into a donkey is as alarming as ever, so be warned for small children. More: TrendingDon’t worry darling, Harry Styles didn't spit on Chris Pine at Venice premiereFlorence Pugh finally speaks out on Don’t Worry Darling amid Olivia Wilde feud claimsVenice's wildest Don't Worry Darling moments: From 'Spit-gate' to 'Miss Flo' With no real deviation in plot, Pinocchio rattles through and wraps things up rapidly – even humorously referenced by Geppetto’s ‘You did all of that in one day?!’ – although the ending has been teased away from cloying to more credible. The faithfulness of this film sees it play justified homage to its inspiration, although often at the expense of offering anything particularly worthy of the whole remake. There’s some self-awareness and jokes though (see Jiminy’s: ‘There are other ways to make a boy but I don’t think Geppetto gets out much’), alongside gorgeous production design, to save it from being completely wooden. Pinocchio is available to watch now, exclusively on Disney Plus. Got a story? If you’ve got a celebrity story, video or pictures get in touch with the Metro. co. uk entertainment team by emailing us [email protected] co. uk, calling 020 3615 2145 or by visiting our Submit Stuff page – we’d love to hear from you. MORE : Harry Styles finally addresses wild claims he spat on Chris Pine and he’s highly amused MORE : Nicolas Cage and wife Riko Shibata welcome first baby and reveal sweet name.
Source:
metro
URL:
https://metro.co.uk/2022/09/08/pinocchio-review-disney-carves-out-a-little-magic-in-rigid-remake-17320121/
Prev Post
Next Post