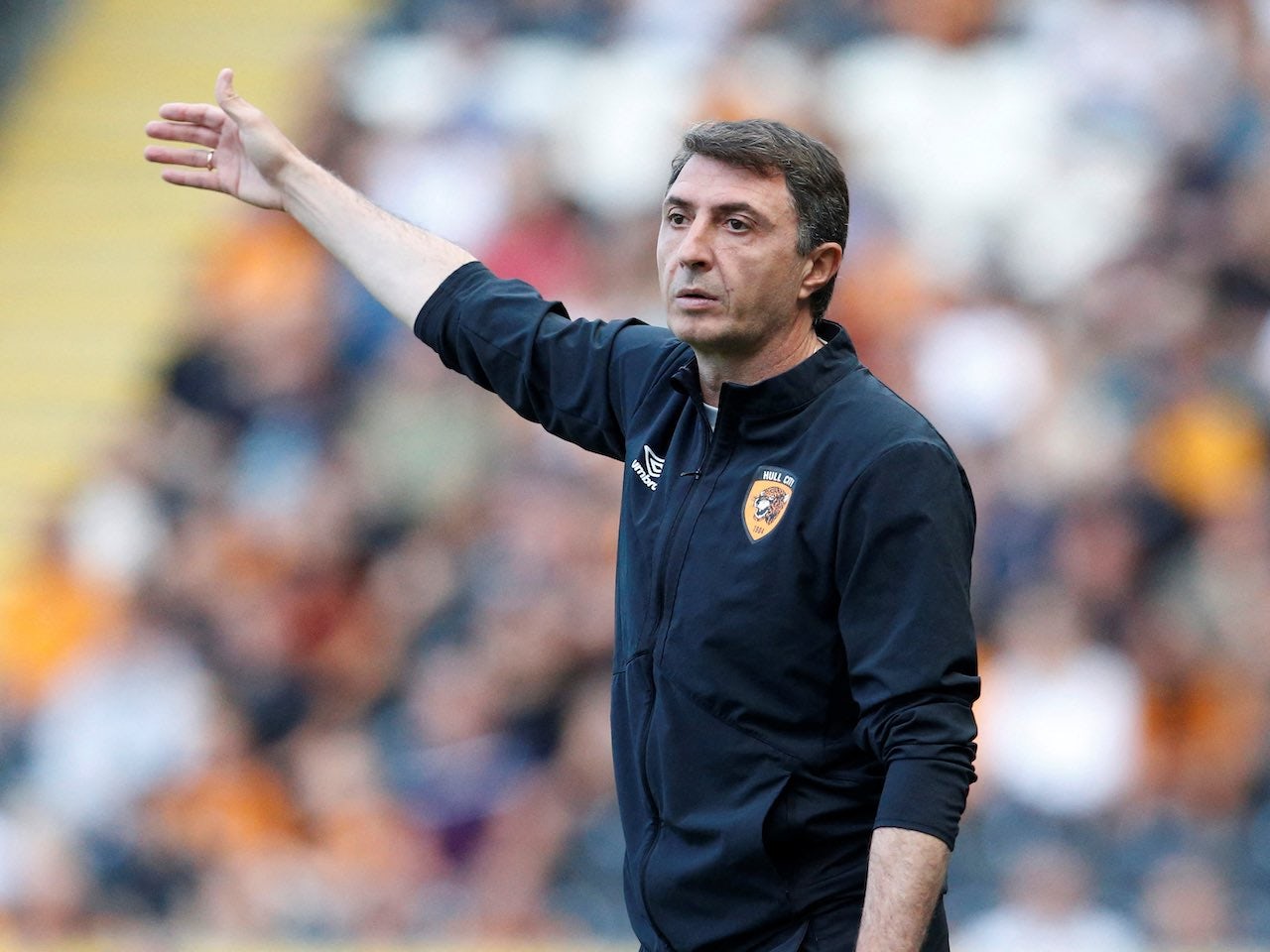 Hull City and Stoke City are scheduled to continue their stuttering Championship campaigns in Tuesday evening's battle at the MKM Stadium. Shota Arveladze 's men lost 2-0 to Sheffield United in their most recent encounter, while the Potters suffered a defeat of their own to Reading. © Reuters Hull could have been forgiven for feeling optimistic about their chances of ending a two-game losing streak against 22nd-placed Cardiff City, but all Premier League, EFL and women's matches were postponed at the weekend following the death of Queen Elizabeth II. As a result, Arveladze and his players have had more than a week to pinpoint their shortcomings in a 2-0 loss to Sheffield United last weekend, as Oli McBurnie and Sander Berge condemned the Tigers to a third defeat of the season. From going unbeaten in each of their first four Championship matches to losing three of their last four, Hull and their leaky defence have slipped to 12th in the rankings with 11 points to their name and are now without a clean sheet in six league outings. Conceding 12 goals in their last four Championship matches certainly highlights where the hosts' deficiencies lie, but their injury crisis is doing them no favours either, and Arveladze's side have largely impressed at home so far. Prior to going down to the promotion-chasing Blades, Hull had strung together a three-game league winning streak at the MKM Stadium, but not since April have the Tigers recorded a shut-out on home soil in the second tier. © Reuters Meanwhile, Alex Neil 's fledgling Stoke City career is yet to get off the mark, as the ex-Sunderland and Preston North End manager followed up an opening 1-1 draw with Swansea City with a 2-1 defeat to Reading last weekend. A pair of Lucas Joao strikes either side of Ben Wilmot 's response continued the Potters' sticky start to the new campaign, with Neil lamenting the pattern of "mistake after mistake" that he witnessed at the Madejski Stadium. Only just keeping their heads above water, Stoke occupy 20th spot in the table after eight games of the new season but are only clear of 22nd-placed Cardiff on goal difference, and four of the Potters' last five away games in the second tier have now ended in defeat. On a brighter note for the under-performing visitors, Stoke left the MKM Stadium with a 2-0 win under their belts back in January - their third straight success against Hull - but not since 2006 have the Potters won back-to-back away games versus the Tigers. © Reuters A trio of Hull players in Ozan Tufan , Lewis Coyle and Jean Michael Seri all emerged from the infirmary last weekend, but Benjamin Tetteh was only on the field for 14 minutes before suffering a hamstring injury, which will rule him out for weeks. Alfie Jones is also fine to feature despite being forced off against Sheffield United, but Hull's long-term injury list includes Salah Oulad M'Hand , Brandon Fleming , Dogukan Sinik , Allahyar Sayyadmanesh , Greg Docherty , James Scott and Vaughn Covil . Deadline-day arrivals Harvey Vale and Xavier Simons are both in contention to make their debuts after joining on loan from Chelsea, while Tyler Smith ought to take the place of Tetteh in the final third. As for Stoke, Nick Powell made a welcome return to action as a second-half substitute in the defeat to Reading, but Dujon Sterling , Dwight Gayle , Gavin Kilkenny , Josh Laurent , Josh Tymon , Harry Clarke and Harry Souttar were all absent from the contest. Neil's options are therefore rather restricted as well given the plethora of names currently out of action, but Powell could provide an alternative option to Sam Clucas and Will Smallbone in midfield. Hull City possible starting lineup: Ingram; Jones, Greaves, Figueiredo; Coyle, Slater, Seri, Elder; Tufan; Estupinan, Smith Stoke City possible starting lineup: Bonham; Fox, Flint, Wilmot; Brown, Clucas, Baker, Powell, Fosu; Campbell, Delap With both sides short of confidence and resources amid their respective injury crises, it should be difficult for either team to assert their dominance after an unexpected rest period. While Hull have been conceding goal after goal in recent weeks, Neil's side are prone to the odd defensive lapse, and we can only envisage this contest ending level. For data analysis of the most likely results, scorelines and more for this match please click here . .
Source:
sportsmole
URL:
https://www.sportsmole.co.uk/football/hull-city/preview/preview-hull-city-vs-stoke-prediction-team-news-lineups_494369.html
Prev Post
Next Post