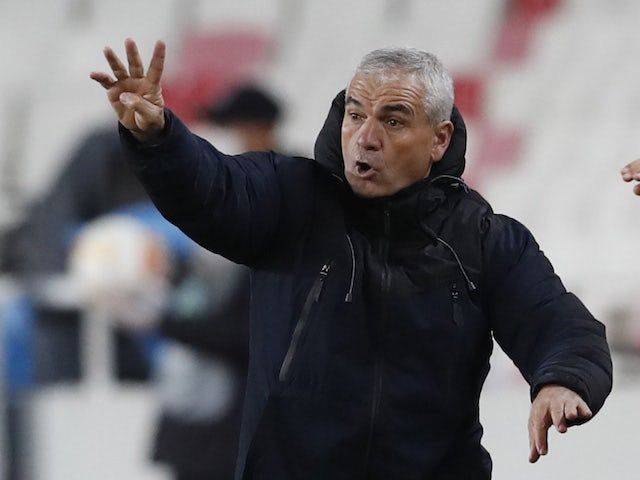 Seeking to pick up their first win of the 2022-23 campaign, Sivasspor go head to head with Istanbulspor at the Yeni 4 Eylul Stadyumu on Sunday. The newly-promoted side head into the weekend fresh off the back of picking up their first win of the season and will look to keep the ball rolling. © Reuters Sivasspor were denied a dream start to their Conference League campaign as they could only salvage a 1-1 draw with Slavia Prague in Group G on Thursday. Peter Olayinka and Dia Saba scored for either side to end the first half level, before goalkeeper Ali Sasal Vural denied Lukas Provod from the penalty spot in the 93rd minute to force a share of the spoils. Riza Calimbay 's men now turn their attention to the Super Lig, where they have failed to win any of their opening five games, picking up three draws and losing twice in what has been an underwhelming start to the 2022-23 campaign. Sivasspor have now failed to win any of their last nine games across all competitions, claiming four draws and losing five games — a run which saw them miss out on a place in the Europa League group stages as they fell to a 5-1 aggregate loss against Malmo in August's qualifying playoffs. With three points from a possible 15, the Yigidos are currently 15th in the Super Lig standings, level on points with Sunday's visitors and two points off Ankaragucu, who are currently rooted to the bottom of the table. Istanbulspor, on the other hand, finally gave their fans something to cheer about as they held firm to secure a narrow 1-0 victory away to Alanyaspor when the sides met a fortnight ago. In a game where Kristal Abazaj received his marching orders, Valon Ethemi came up clutch at the Bahcesehir Okullari Arena as he netted the only goal of the game three minutes after the half-time break to hand the hosts their first defeat of the season. Prior to that, Osman Zeki Korkmaz 's men kicked off their top-fight campaign with a run of three defeats from their opening three games of the season, shipping seven goals and failing to find the tester in that time. Istanbulspor, who saw off Bandirmaspor in June's promotion playoff final, head into the weekend unbeaten in five of their last six away games across all competitions, picking up four wins and one draw since the start of May. © Reuters Sivasspor will be without experienced left-back Ugur Ciftci , who will serve a one-match suspension after seeing red in the league game against Fatih Karagumruk on September 3. In his absence, Turkish international Ziya Erdal will push for his third appearance of the season, teaming up with Aaron Appindangoye , Dimitris Goutas and Murat Paluli at the defensive end of the pitch. On the injury front, Calimbay will have to make do without former New England Revolution defender Samba Camara , who has been out of action since May through a long-term knee injury. Istanbulspor, on the other hand, will take to the pitch without the midfield duo of Eslem Ozturk and Eduard Rroca , who have been sidelined through ACL and shoulder injuries respectively. Former Anderlecht forward Abazaj is also out of contention for this weekend's matchup as he serves a one-match suspension after seeing red against Alanyaspor last time out. Sivasspor possible starting lineup: Sasal; Osmanpasa, Goutas, Appindangoye, Erdal; Ulvestad, Keita; NJie, Saba, Gradel; Yatabare Istanbulspor possible starting lineup: Jensen; Erdogan, Yesil, Aksu; Berber, Sarikaya, Kabasakal, Yasar; Topalli, Ethemi, Yilmaz Sivasspor and Istanbulspor have endured a slow start to the season and find themselves languishing deep in the bottom half of the table. While the visitors will be looking to build on their win over Alanyaspor, Calimbay's men boast a superior and more experienced square and we are backing them to claim all three points, albeit by a slender margin. For data analysis of the most likely results, scorelines and more for this match please click here . .
Source:
sportsmole
URL:
https://www.sportsmole.co.uk/football/sivasspor/preview/preview-sivasspor-vs-istanbulspor-prediction-team-news-lineups_494285.html
Prev Post
Next Post