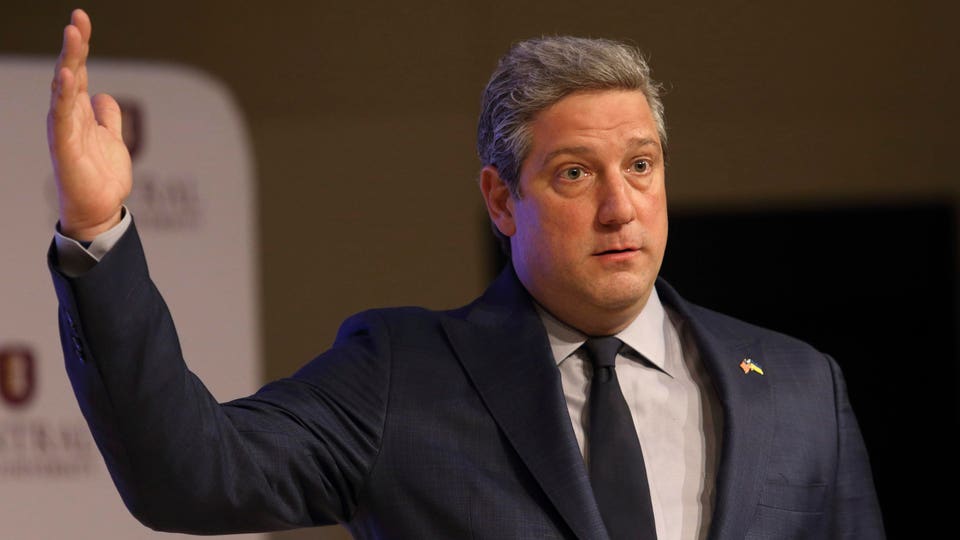 Breaking Business Rep. Tim Ryan Suggests Biden Shouldn’t Run In 2024—Joining These Other Democrats Nicholas Reimann Forbes Staff I cover national politics, with a focus on Donald Trump. Following New! Follow this author to stay notified about their latest stories. Got it! Sep 9, 2022, 02:13pm EDT | Share to Facebook Share to Twitter Share to Linkedin Topline Rep. Tim Ryan (D-Ohio)--the Democratic nominee for Ohio's open Senate seat--told a Youngstown TV station Thursday that he believes his party needs to make a "generational move" away from President Joe Biden, becoming the third Democrat in Congress to publicly suggest the president should not seek reelection. Rep. Tim Ryan (D-Ohio) talks with reporters following a debate at Central State University in . . . [+] Wilberforce, Ohio, on March 28, 2022. (AP Photo/Paul Vernon) Copyright 2022 The Associated Press. All rights reserved Key Facts When asked about whether he thinks Biden should run in 2024, Ryan said "we need new leadership across the board," telling WFMJ-TV that both Republicans and Democrats should embrace a younger generation of leaders. Ryan's comments largely echo those of Reps. Angie Craig (D-Minn. ) and Dean Phillips (D-Minn. ), who are both seeking reelection. Phillips in late July became the first Democrat in Congress to say Biden shouldn't run in 2024, telling a Minneapolis radio station that "the country would be well-served by a new generation of compelling, well-prepared, dynamic Democrats to step up. " Craig said at an event the following week that she agreed with her colleague's call for a "new generation of leadership. " Biden has repeatedly said he is running for reelection in 2024. Crucial Quote "I think the environment politically across the country is poisonous," Ryan said. Surprising Fact Ryan attended an infrastructure event featuring Biden in suburban Columbus on Friday afternoon, hours after his comments aired. Biden has also endorsed Ryan in the Senate race. Key Background Polling has consistently shown that most Democratic voters do not want Biden to be the party's presidential nominee in 2024, and while only a handful of officials have publicly said it's time to move on from Biden, reports suggest many Democrats are hoping behind the scenes that Biden doesn't run. The biggest concern is Biden's advanced age—at 79, he is by far the oldest presidential office holder in the nation's history. But Biden can tout a series of major accomplishments recently, such as signing the Inflation Reduction Act into law, enacting the most significant new federal gun control measures in decades and a series of strong jobs reports, which have started to ease concerns about his approval rating. According to FiveThirtyEight's polling average , Biden's approval rating is 42. 5%, which is a significant improvement from his 37. 5% rating in late July. Tangent Ryan has campaigned as a moderate who claims he's willing to clash with Democratic leaders, including Biden, when he feels the party veers too far to the left. But Ryan's House votes have aligned with Biden's position 100% of the time, according to FiveThirtyEight . Further Reading First Democrat In Congress Suggests Biden Shouldn’t Run In 2024 (Forbes) Asked about Biden in 2024, Craig says ‘new leaders’ needed in D. C. (MinnPost) Nearly 2 Out 3 Democrats Don’t Want Biden As 2024 Presidential Candidate, Poll Finds (Forbes) Biden Says He Plans To Run For Reelection In 2024 (Forbes) Biden’s Approval Rating Surges After Series Of Unexpected Wins (Forbes) Follow me on Twitter . Send me a secure tip . Nicholas Reimann Editorial Standards Print Reprints & Permissions.
Source:
forbes
URL:
https://www.forbes.com/sites/nicholasreimann/2022/09/09/rep-tim-ryan-suggests-biden-shouldnt-run-in-2024-joining-these-other-democrats/
Prev Post
Next Post