See the conjunction of the moon and Jupiter on Sunday (Sept. 11) 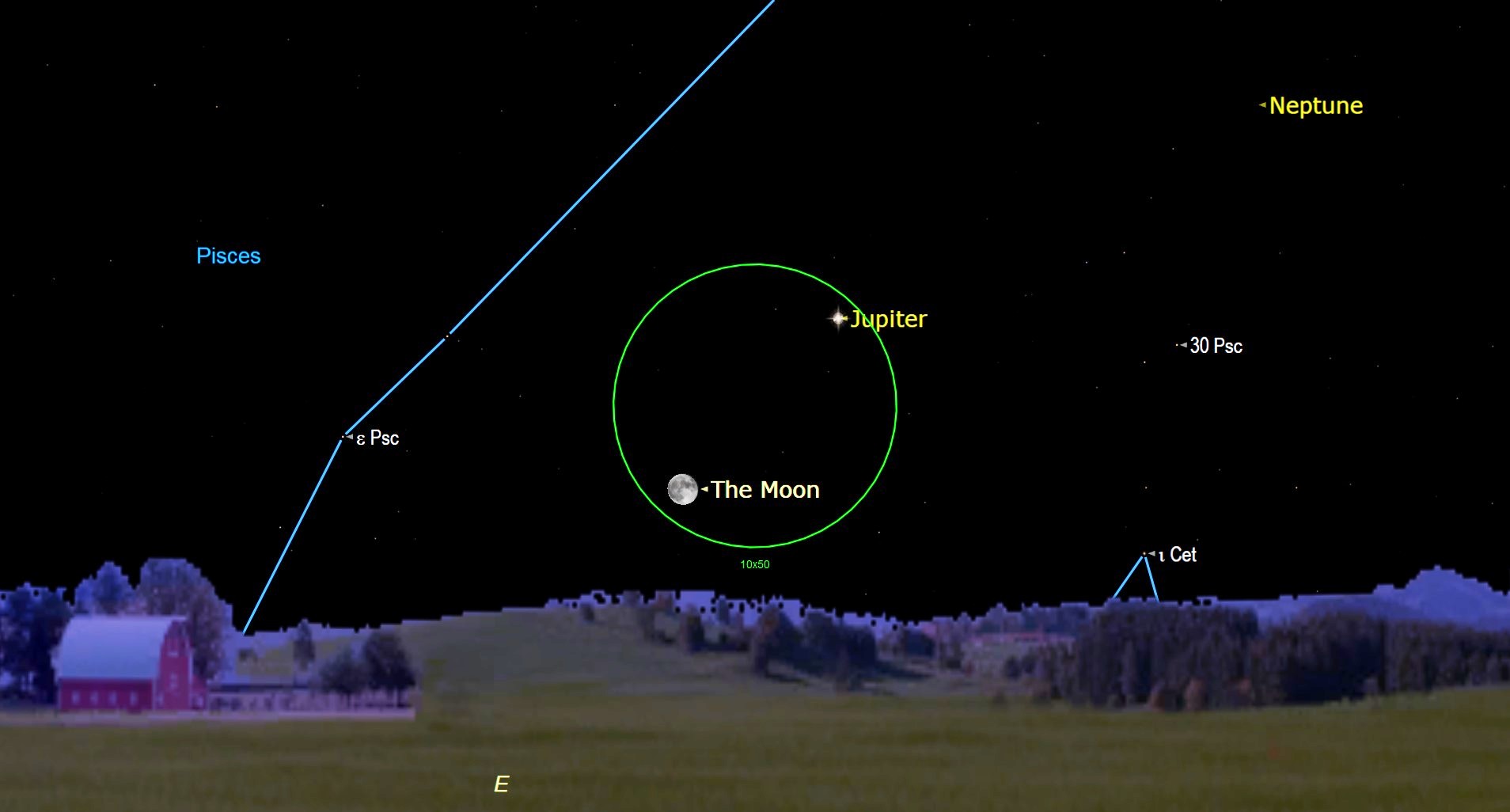 On Sunday (Sept. 11), Jupiter and the moon will make a close approach to each other in the sky sharing the same right ascension, an astronomical arrangement known as a conjunction. The moon will pass to within around one degree to the south of Jupiter in the evening sky and both objects will be visible in front of the constellation of Pisces. From New York, the conjunction of the moon and Jupiter will appear from around 8:37 p. m. ET (0037 GMT on Sept. 12) at around seven degrees above the eastern horizon. (A fist at arm's length equals roughly 10 degrees in the sky. ) At around 1:57 a. m. ET (0547 GMT) on Sunday (Sept. 12), the conjunction will reach its highest point in the sky — 49 degrees above the southern horizon. The moon-Jupiter conjunction will continue to be visible until around 6:13 a. m. ET (1013 GMT) at which time they will both disappear in the dawn twilight at around 19 degrees above the western horizon. Related: Night sky, September 2022: What you can see tonight [maps] Because of the wide angular separation of the moon and Jupiter during this conjunction, the event won’t be visible in the field view of a telescope. This means Sunday's conjunction will be best seen by the naked eye or with a pair of binoculars. Clear, dark skies, will be an advantage in spotting the conjunction. Related: Best binoculars 2022: Top picks for stargazing, wildlife and more The moon moves rapidly through the night sky in comparison to other cosmological bodies passing each constellation around once a month. Jupiter makes a much slower passage past the constellations, traveling through roughly one a year. Jupiter is the fifth planet from the sun and around 484 million miles from our star. It is also the largest planet in the solar system by a large margin, massively dwarfing the moon despite being dimmer in the night sky over Earth. It would take about 1,300 'Earths' to fill the volume of Jupiter, so, with around 50 moons able to fit in the volume of our planet, that means that the gas giant could conceivably fit around 65,000 moons within its volume. NASA says 11 Earths would be needed to ring the diameter of Jupiter, and if our planet were the size of a grape, then this gas giant would be a basketball in comparison, and the moon would be about the size of a garden pea. Though comprised of dense gas, Jupiter is so massive, that it is estimated to have over twice the mass of all of the solar system's other planets combined. Seen with the naked eye from the surface of Earth , Jupiter appears as a bright white speck of light, that can be seen at twilight and is brighter than even the brightest star in the night sky — Sirius. Despite this, Jupiter is still dimmer than Venus. The four largest moons of Jupiter — or Jovian moons — Ganymede, Europa, Io, and Callisto, would also the visible from Earth with the naked eye if not for the fact their proximity to the gas giant and the light it reflects 'washes out' the light they reflect. The larger of the more than 75 Jovian moons can be seen with binoculars or a small telescope, through which Jupiter appears as a white disk. Looking for a telescope to see Jupiter and the moon? We recommend the Celestron Astro Fi 102 (opens in new tab) as the top pick in our best beginner's telescope guide . A more powerful instrument, or a closer view, shows Jupiter is banded across its surface with distinctive stripes and swirls. These are clouds and winds of ammonia and water milling around the gas giant planet's atmosphere, which is composed mostly of hydrogen and helium. Jupiter's surface is marked by massive storms, the most remarkable of which is the ' great Red Spot . ' This storm which has been raging for over 100 years and sinks deep enough into Jupiter's atmosphere that it could swallow Earth whole. Conjunctions between the moon and the planets occur roughly once every month at around the same time. The next conjunction of the moon and Jupiter occurs next month in the evening of Oct. 8 through the morning of Oct. 9. You can check out our guides for the best binoculars and the best telescopes to spot the conjunction of the moon and Jupiter. If you're hoping to capture a good photo of Jupiter or the moon, check out our recommendations for the best cameras for astrophotography and best lenses for astrophotography . Editor's Note: If you snap a photo of the moon and Jupiter and would like to share it with Space. com's readers, send your photo(s), comments, and your name and location to [email protected] com . Follow us on Twitter @Spacedotcom (opens in new tab) or on Facebook (opens in new tab) . .
Source:
space
URL:
https://www.space.com/moon-jupiter-conjunction-september-11/
Prev Post
Next Post