Stressed Out? Wearable Gadgets From Fitbit, Apple and Others Want to Help - CNET 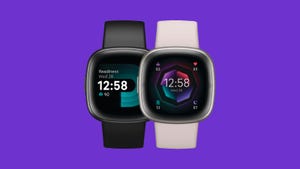 Smartwatches and fitness trackers have been measuring our physical wellbeing for years. Now they're trying to help us manage our mental health, too. The recently announced Fitbit Sense 2 , which launches this fall, is one of the latest examples of how tech companies are expanding their wellness offerings to encompass stress management and general mental wellbeing. Fitbit's new high-end smartwatch can measure signs of stress throughout the day, building on the previous Sense's on-demand checks. Startup Happy Health also recently introduced the Happy Ring , which claims to track stress levels in real time. Both announcements come after Apple launched its Mindfulness app for the Apple Watch last year. Why the sudden interest in making us less stressed? That's a question only Fitbit and the other companies behind these products can answer. But it's not surprising that tech companies small and large are paying more attention to mental health in addition to physical fitness. Wearables can already measure bodily signals that would have once required a trip to the doctor's office or a standalone device, like heart rate, temperature, blood oxygen saturation and heart rate variability. They've also gotten pretty good at monitoring our sleeping patterns, including how much time we're spending in various stages of slumber. Mental wellness seems like a natural next step -- especially as adults around the world are feeling more stressed than ever. "Modern life was hard enough with constant technology and ever-present communication and the pace of life," said Dr. Debra Kissen, CEO of the Light On Anxiety Treatment Center, which specializes in cognitive behavioral therapy services. "And then throw in a pandemic, and I think it really brought mental health concerns that were always there undeniably to the surface. " The Fitbit Sense 2 can continuously monitor for signs of stress, unlike the previous model. There's another simple reason why wearables are expanding into new areas like mental wellness: technology is getting better. Now that the sensors required for measuring basic metrics like heart rate and steps have been on the market for a while, it's easier to shrink them down. "The more mature it is, the more it could be miniaturized, the more likely we are to be able to get it into a watch or a band or something that we wear," said Julie Ask, a vice president and principal analyst at market research firm Forrester. The Fitbit Sense 2's headlining new feature is its ability to continuously measure electrodermal activity (EDA), or changes in your skin's sweat level. These changes can indicate a bodily response to stress, although Fitbit says factors like movement, noise and temperature can also impact EDA. The Sense 2 combines these measurements with skin temperature, heart rate variability and heart rate data to notice when you might be stressed. The previous version of the Sense allows wearers to perform on-demand EDA checks, but lacks the technology to measure changes passively throughout the day. The recently announced Happy Ring claims to connect "the dots between your mental and physical health. " Like the Fitbit Sense, the Happy Ring can also monitor electrodermal activity to detect potential stress. Cofounded by Sean Rad, one of the founders behind Tinder, Happy Health claims the ring's readings become more personalized the more you wear it. The Fitbit Sense 2 and Happy Ring may be two of the newest wearables focusing on mental wellness, but they're certainly not the only devices to do so. In 2021, Apple rebranded the Apple Watch's Breathe app as the Mindfulness app, which added a new tool called Reflect in addition to breathing sessions. As the name implies, this feature presents the user with a prompt to reflect on, such as a time when you've overcome a challenge or one thing you're grateful for. Apple may have plans to further expand its ambitions in this area, as The Wall Street Journal reports the iPhone maker is working on technology that can look for signs of depression and cognitive decline. The Apple Watch's "Breathe" watch face The Oura ring , which measures data like heart rate, skin temperature and activity, was also used in a study exploring whether data from smartphones and wearables can be used to predict symptoms of depression and anxiety. The question is whether wearable devices are helpful when it comes to managing stress. Bodily signals like EDA and heart rate variability can be good signs of a shift in physiology and sympathetic nervous system activation, according to Kissen. A study published in the April-June 2022 edition of the Journal of Medical Signals and Sensors also found that EDA has the potential for classifying stress levels. But changes in bodily markers like heart rate, perspiration and blood pressure may not always indicate stress and could be a sign of other conditions, Dr. Charles A. Odonkor, assistant professor at the Yale University School of Medicine, said to CNET via email. He added that he hasn't seen any studies involving wearables showing that these devices lead to changes in levels of cortisol, which the Mayo Clinic describes as the "primary stress hormone. " "The true test is whether these wearables can differentiate stress states from other physiologic states," he said. Still, becoming aware that you might be stressed, and having the tools to track those moments could be helpful, according to Kissen and Odonkor. Especially if you notice that you're stressed sooner rather than later. "The earlier we catch stress, and when we do something about it," said Dr. Kissen, "the healthier things will unfold. ".
Source:
cnet
URL:
https://www.cnet.com/tech/mobile/stressed-out-wearable-gadgets-from-fitbit-apple-and-others-want-to-help/#ftag=CADf328eec
Prev Post
Next Post