Student showed no sign of depression; counsellors on board: IIT Hyderabad's statement after student death on campus 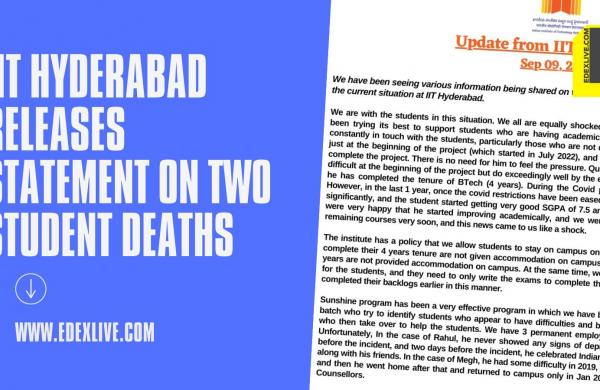 The Indian Institute of Technology (IIT), Hyderabad has released a statement addressing the recent deaths of two students of the institute.   On September 7, a former student, Megh Kapoor, who had completed his BTech from IIT Hyderabad three months ago, allegedly died by suicide at the lodge he was staying at near the institute. Megh was a native of Jodhpur, Rajasthan and according to a report by The Indian Express, the police said that he had taken a room in the lodge to prepare for competitive exams.   On August 31, a 25-year-old MTech student allegedly died by suicide in his hostel room at IIT Hyderabad. According to The Indian Express, the student, Rahul Bingumalla's parents alleged foul play in their son's death. The Sangareddy Rural police have registered a case, and an investigation is underway into both incidents.   In a statement, IIT Hyderabad attempted to explain the facts of the cases and give a little background on the two students. In Rahul's case, the institute said that there "was no reason for him to feel the pressure. " "The faculty advisors are always constantly in touch with the students, particularly those who are not doing very well. The MTech student (Rahul) is just at the beginning of the project (which started in July 2022), and he has about 10 months available for him to complete the project. There is no need for him to feel the pressure. Quite a number of students find any project very difficult at the beginning of the project but do exceedingly well by the end of the project period," read the statement.   On Kapoor, who had just graduated from the institute, the statement explained that he had struggled with studies during the COVID-19 pandemic, and had also seen a counsellor in 2019. "However, in the last 1 year, once the covid restrictions have been eased out, the department has started helping him (Megh Kapoor) significantly, and the student started getting very good SGPA of 7. 5 and 8. 3, respectively, in the last two years. We were very happy that he started improving academically, and we were expecting that he would complete all the remaining courses very soon, and this news came to us like a shock," said the institute.   The statement added that once students complete their term of the course, (in Megh's case, four years of BTech), they are required to vacate the campus. ". . . we do not mandate attendance as compulsory for the students, and they need to only write the exams to complete the course. Quite a number of students have completed their backlogs earlier in this manner," the statement clarified.   These two incidents were not the only death by suicide reported in IITs in the span of two weeks. On September 6, a 32-year-old PhD scholar at IIT Kanpur allegedly died by suicide in his hostel room and these reports emerging back-to-back have once again shined the spotlight on  the possibilities of mental pressure on students in premier institutes such as IITs.   IIT Hyderabad made a note about their Sunshine programme in their statement, which tasks volunteers to identify students who might be struggling with mental health issues and bring them to the notice of the three permanent counsellors who stay on campus. The statement adds that "unfortunately" in Rahul's case, there were no visible signs of depression. .
Source:
edexlive
URL:
https://www.edexlive.com/news/2022/sep/10/student-no-sign-of-depression-counsellors-on-board-iit-hyderabad-statement-student-death-30968.html
Prev Post
Next Post