The Ukrainian Army Is Surrounding 10,000 Russian Troops In The East 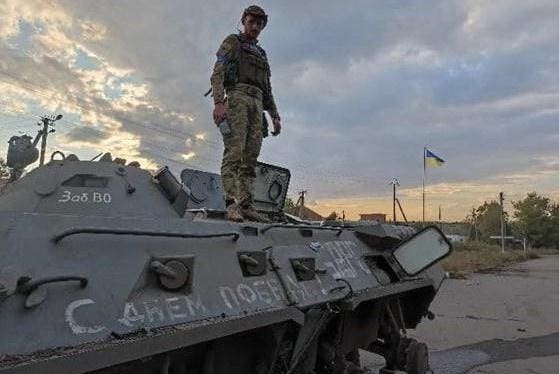 Aerospace & Defense Editors' Pick The Ukrainian Army Is Surrounding 10,000 Russian Troops In The East David Axe Forbes Staff I write about ships, planes, tanks, drones, missiles and satellites. Following New! Follow this author to stay notified about their latest stories. Got it! Sep 9, 2022, 05:04pm EDT | New! Click on the conversation bubble to join the conversation Got it! Share to Facebook Share to Twitter Share to Linkedin A Ukrainian soldier with an abandoned Russian BTR-80 armored vehicle in Kharkiv Oblast. Via social media Two days after punching through Russian defenses outside the city of Kharkiv, Ukrainian forces have fought all the way to Kupyansk, a critical node in Russia’s supply lines in Kharkiv Oblast in northeastern Ukraine. Separately, Ukrainian troops farther south around Izium also are on the move. The twin attacks are closing a noose around 10,000 or more undersupplied, demoralized Russian troops caught between Ukrainian brigades in the south, west and north and the Oskil River in the east. According to Ukrainian estimates, the Russians are losing as many as 600 troops a day as the Ukrainian counteroffensives gain momentum—not just around Kharkiv, but also in the south around the Russian-occupied port of Kherson. The Russian army hasn’t suffered losses this severe since the early weeks of Russia’s wider war on Ukraine. It’s worth noting what happened in those first weeks. The Russians overextended their logistics while trying to encircle Kyiv. Ukrainian drones, artillery batteries and missile teams targeted the unprotected supply convoys , eventually starving the front-line battalions and forcing them to retreat from Kyiv. Retreat might be the most favorable outcome for Russian forces along the Kharkiv axis, as well—assuming, of course, they can find a way through Ukrainian lines or across the Oksil River. But Ukrainian artillery already has poked holes in the main bridge across the Oksil near Kupyansk. MORE FOR YOU American Airlines Pilots Say Operations Managers Must Go After Summer Breakdowns The U. S. Air Force Is Gradually Rebuilding Its B-52 Bombers From The Rivets Out An American Bomber Visited Malaysia. A Bizarre Mix Of Local Jets Rose To Meet It. The alternatives to retreat could be surrender . . . or death. The Ukrainian assault toward Kupyansk began Wednesday. The timing was interesting—and indicative of Kyiv’s master plan. Ukraine’s Southern Theater Command a week earlier began probing Russian defenses north of Kherson, eventually finding a few weak spots in Russian lines. Anticipating a southern counteroffensive, the Kremlin weeks ago began shifting battalions from the east to the south. The redeployments left gaps in Russian lines in eastern Ukraine’s Donbas region as well as around Kharkiv. It’s those gaps the Ukrainians now are exploiting. The Ukrainian 25th, 80th and 92nd Brigades–as well elements of the powerful 3rd Tank Brigade—rolled through Verbivka, around 30 miles southeast of Kharkiv, before splitting up. Some battalions raced all the way to Kupyansk and the Oksil. Others turned south to accelerate the encirclement of the Russian 4th Guard Tanks Division and other Russian formations around Izium. As Russian ground forces buckle, the Russian air force is missing in action. That in part is an inevitable result of Russian air-power doctrine, which treats warplanes like flying artillery and assigns them preplanned targets. In effect, Russian pilots simply bomb coordinates on a map that army commanders choose for them. Neither the pilots nor the commanders can keep up when the front lines are changing by the hour. But the absence of Russian air power also speaks to the effectiveness of Ukrainian air-defenses. Six months into Russia’s wider war on Ukraine, the Russians still haven’t suppressed Ukraine’s surface-to-air missile batteries. The Ukrainian air force—in particular, MiG-29 and Su-27 fighters firing American-made anti-radiation missiles —meanwhile has knocked out many of Russia’s own air-defenses, clearing the air for Ukraine’s Su-25 attack jets and Mil attack helicopters. Increasingly surrounded, unsupported and harried from the air, the Russians southeast of Kharkiv are running out of options. More and more of them are choosing survival—and surrendering. "We have a huge problem,” Oleksiy Arestovych, an adviser to Ukrainian President Volodymyr Zelensky, said Friday . “We have nowhere to keep all the POWs. ” Follow me on Twitter . Check out my website or some of my other work here . Send me a secure tip . David Axe Editorial Standards Print Reprints & Permissions.
Source:
forbes
URL:
https://www.forbes.com/sites/davidaxe/2022/09/09/the-ukrainian-army-is-surrounding-10000-russian-troops-in-the-east/
Prev Post
Next Post