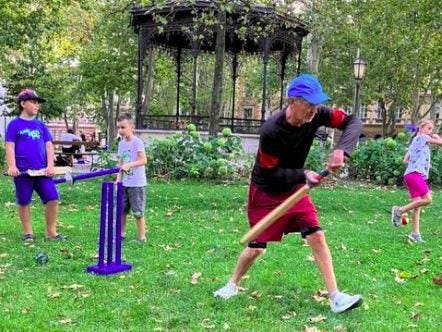 SportsMoney Ukrainian Cricket’s Sad Plight After Missing Out On All-Important Membership And Funding Tristan Lavalette Contributor Opinions expressed by Forbes Contributors are their own. New! Follow this author to stay notified about their latest stories. Got it! Aug 9, 2022, 11:19am EDT | New! Click on the conversation bubble to join the conversation Got it! Share to Facebook Share to Twitter Share to Linkedin Kobus Olivier's dreams of Ukraine getting ICC membership were dashed. Supplied While the fallout continues over UAE’s new T20 league , which this week has unveiled marquee signings amid fears the cashed-up competition threatens the primacy of international cricket, the sad plight of the fledgling sport in Ukraine has fallen into the backdrop. After war-torn Ukraine failed to secure coveted Associate membership at last month’s International Cricket Council (ICC) Annual Conference, its top cricket administrator tore into the governing body in a scathing email addressed to ICC chief executive Geoff Allardice and chair Greg Barclay amongst others. Ukraine’s application for membership, which yields vital funding and status, was deferred until “cricket activity resumes” in the embattled country. “Firstly I would like to express my bitter disappointment at the decision of the ICC not to give Associate membership to Ukraine,” wrote Ukrainian Cricket Federation chief executive Kobus Olivier in the aftermath of the decision, which I had tipped the week before the AGM. “I believe that firstly you threw Ukrainian Cricket under the bus and have effectively made sure that cricket will never be played again in Ukraine. “You completely missed the bigger picture. You don’t have any understanding of what membership would have meant for the Ukrainian people. ” Olivier said he has not received a reply as fears grow over the future of Ukrainian cricket. Without ICC funding, Olivier said his cricket program for Ukrainian refugees in Croatia would require donations to continue. A planned international competition for six to 12 years, dubbed the ‘Ukrainian Freedom Cup’, is earmarked to be held in September in Zagreb. MORE FOR YOU WWE Extreme Rules 2021 Results: Winners, News And Notes As Roman Reigns Beats The Demon The World’s Highest-Paid Soccer Players 2021: Manchester United’s Cristiano Ronaldo Reclaims Top Spot From PSG’s Lionel Messi The Good, Bad And Ugly From The Green Bay Packers’ Win Over The San Francisco 49ers “We have more than 150 Ukrainian refugees in the park and even the moms and grandparents play,” Olivier told me. “We’ve had no assistance or support from the ICC. ” Ukrainian refugees have been playing cricket in Zagreb. Supplied After Russia’s invasion in February, the spotlight shone on the fledgling growth of cricket in Ukraine with much mainstream media coverage devoted to the dedicated efforts of Olivier, an affable South African who had taken responsibility to seriously develop the sport in his adopted country. Hopes were high of Ukraine receiving invaluable ICC membership, which involves much-needed funding of $18,000 annually and T20I status, ensuring credibility, stature and a pathway towards development. But those dreams nosedived when Ukraine missed out on Associate membership for the time being. Even though Olivier had started cricket programs for Ukrainian refugees in Zagreb, believing Croatia’s capital could become its makeshift headquarter during the war, the ICC’s Membership Committee, however, was not satisfied and said Ukraine did not satisfy the eligibility criteria. “In particular, in light of the ongoing war there is currently no cricket activity taking place in Ukraine,” it wrote in a document distributed during the AGM. “The ICC has maintained regular contact with the UKF and whilst there is evidence of some cricket activity being conducted in refugee camps (outside of Ukraine) through the UKF, there is currently no cricket activity taking place in Ukraine. “Consequently—and through no fault of their own—as there is currently no cricket activity in Ukraine, the Ukraine Cricket Federation does not currently meet this aspect of the Membership Criteria. ” In a document on April 29, ICC management said it would have recommended Associate membership for Ukraine prior to the war. “Since UCF’s formal application for ICC Membership, the war in Ukraine has disrupted UCF’s ability to operate,” it wrote. “Most, if not all, of the current UCF officials have fled Ukraine, and there is no certainty as to when, or if, they will be able to return. Whilst the war continues, UCF are not able to operate effectively as a National Governing Body, although it should be noted that this is due to circumstances completely outside of their control. ” “The ICC continues to support the Ukraine Cricket Federation through this process,” said the ICC in a media release after the AGM. Kobus Olivier wrote a scathing email to chairman Greg Barclay. (Photo by Munir uz Zaman / AFP) . . . [+] (Photo by MUNIR UZ ZAMAN/AFP via Getty Images) AFP via Getty Images With the requisite funding, Olivier believed his program in Zagreb could eventually expose around 10,000 Ukrainians to cricket. “They will eventually go back to Ukraine, the war won’t continue forever,” he said. “The ICC just deferred (the membership application) and promised continuing the support. “They missed out on an unbelievable opportunity to grow the game. ” Follow me on Twitter . Tristan Lavalette Editorial Standards Print Reprints & Permissions.
Source:
forbes
URL:
https://www.forbes.com/sites/tristanlavalette/2022/08/09/ukrainian-crickets-sad-plight-after-missing-out-on-all-important-membership-and-funding/
Prev Post
Next Post