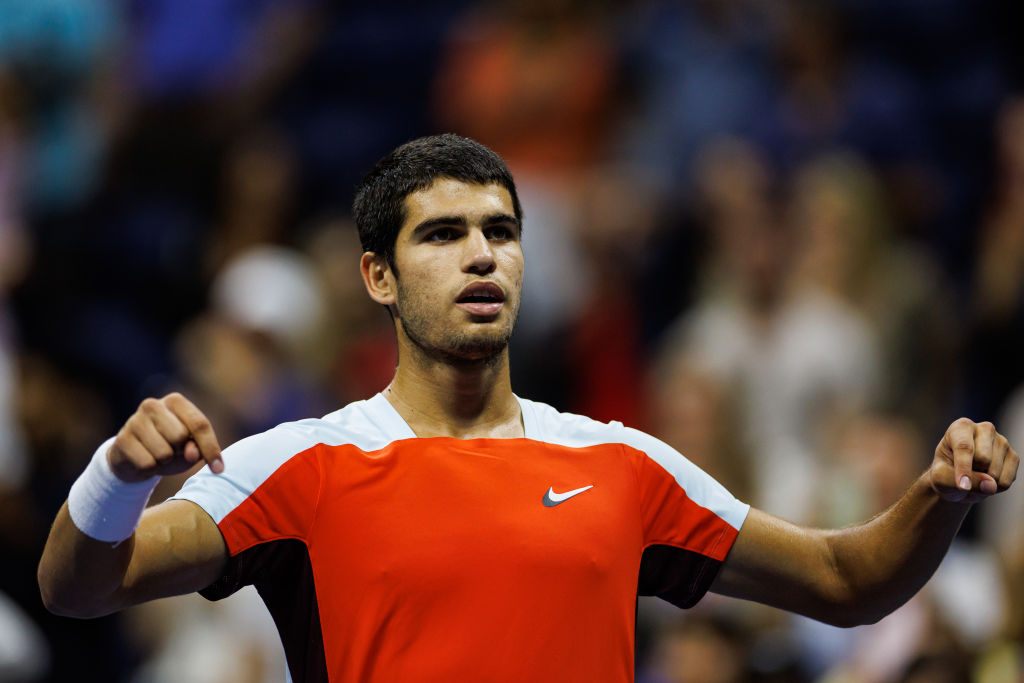 Carlos Alcaraz is just one game away from becoming the youngest ever world number one (Picture: Frey/TPN/Getty Images) Carlos Alcaraz is gearing up for the biggest match of his young career when he takes on Norwegian Casper Ruud in the US Open final this evening. Alcaraz is regarded as the most exciting young player on the ATP tour, with those in the game predicting the Spaniard will win multiple Grand Slams in his career. Alcaraz’s ball striking and immense physicality have already drawn comparisons with compatriot Rafael Nadal, who Alcaraz idoloised growing up. The fiery youngster is already one of the best players in the world despite his tender age and has already won four titles in 2022. He became the first man in history to beat Nadal and Novak Djokovic at the same clay court tournament at the Madrid Open earlier this year. And now Alcaraz is just one game away from his first Grand Slam title, whilst victory in New York will also see him become the youngest male world number one in history. Here is what you need to know about tennis’ next big superstar. How old is Carlos Alcaraz? Alcaraz is currently 19 years old, having been born in Murcia, Spain, in May 2003. Alcaraz is tipped to win multiple Grand Slams in his career (Picture: Elsa/Getty Images) His quarter-final win over Italy’s Jannick Sinner saw him become the youngest player to reach the semi-finals of the US Open since Pete Sampras in 1990. His mammoth five set victory over home favourite Frances Tiafoe makes the Spaniard just the second teenager to reach the final of the US Open in the open era. Alcaraz is also the youngest male player to reach a Grand Slam final of any event since Nadal’s maidan French Open win in 2005. And back in July, Alcaraz became the youngest player since Nadal in 2005 to be ranked in the top five of the ATP world rankings. What has Alcaraz said about reaching the US Open final? Speaking after booking his place in the US Open final, Alcaraz said: ‘It’s amazing to be able to fight for big things. ‘First time in a final of a Grand Slam. I can see the No 1 but at the same time, it’s so far. Alcaraz will take on Casper Ruud in tonight’s final (Picture: Matthew Stockman/Getty Images) ‘I have one more to go against a player who plays incredible. I’m going to give everything that I have. I’m going to enjoy the moment and let’s see what happens. ’ More: US OpenCasper Ruud makes Erling Haaland admission after reaching US Open finalWhen is the US Open 2022 final and how to watch on TV?Round-up of celebs supporting Serena Williams at US Open - from Zendaya to Hadid sisters When is the men’s US Open final? The men’s final will take place tonight (Sunday, September 11) at 9pm UK time. The match will be held at the Arthur Ashe stadium in New York. Tennis fans in the UK can watch Alcaraz take on Ruud live on Amazon Prime, with live coverage of the match also available on BBC Radio 5 Sports Extra. MORE : Iga Swiatek overcomes stubborn Ons Jabeur test to win her first US Open title MORE : Casper Ruud makes Erling Haaland admission after reaching US Open final Follow Metro across our social channels, on Facebook, Twitter and Instagram Share your views in the comments below.
Source:
metro
URL:
https://metro.co.uk/2022/09/11/us-open-final-2022-how-old-is-carlos-alcaraz-17348852/
Prev Post
Next Post