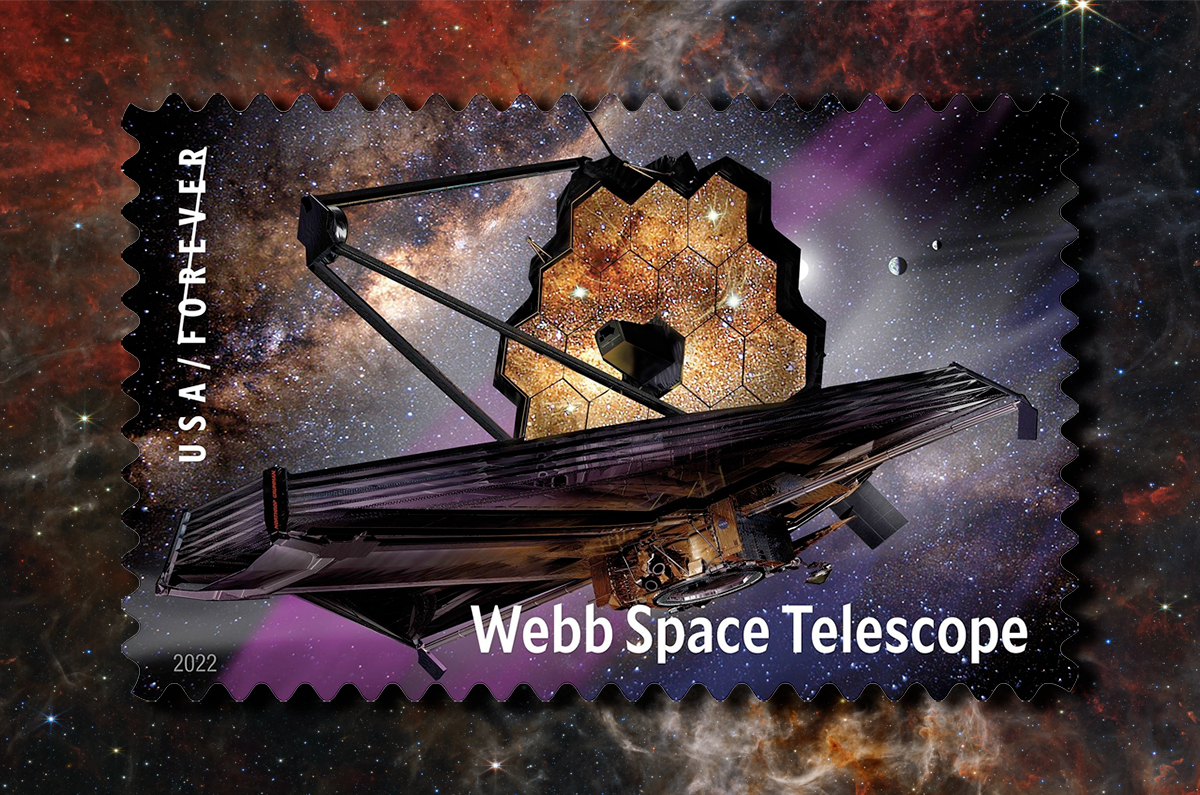 The world's largest and most powerful space telescope is now for sale at your local U. S. post office. A postage stamp depicting (opens in new tab) NASA's James Webb Space Telescope (JWST) was released by the U. S. Postal Service (USPS) on Thursday (Sept. 8). USPS Board of Governors vice chairman Anton Hajjar served as the dedicating official at the First Day of Issue ceremony held at the Smithsonian's National Postal Museum in Washington, D. C. "The James Webb Space Telescope orbits the sun about a million miles away from our planet. Now it will travel the United States mail system, with the launch of this new Forever stamp," said Hajjar at the event. "The Webb telescope is sending truly astounding images, I'm sure you will agree!" Gallery : James Webb Space Telescope's 1st photos "The telescope itself, which we celebrate in this stamp, is an engineering marvel, decades in the making," Hajjar said. Seven months after its launch in December 2021, the Webb Space Telescope began returning infrared images and data that is now redefining astronomers' understanding of the universe. Among its early science results has been its first direct imaging of an exoplanet and the deepest and highest-resolution infrared view of the universe (opens in new tab) ever seen. The Webb Space Telescope stamp depicts the tennis court-size observatory set against a starscape based on a digital illustration by artist James Vaughan (opens in new tab) . Now for sale in panes of 20, the Webb stamp is Forever denomination, meaning it will always be equal in value to the First-Class Mail 1-ounce price. "When anyone who uses these stamps looks at this telescope, I want them to see what I see — its incredible potential to reveal new and unexpected discoveries that help us understand the origins of the universe, and our place in it," said Bob Cabana, NASA's associate administrator and a former astronaut, who joined Hajjar at the ceremony. "This telescope is the largest international space science program in U. S. history, and I can't wait to see the scientific breakthroughs it will enable in astronomy. " Other officials in attendance and taking part in the First Day of Issue ceremony included Ellen Stofan, undersecretary for science and research at the Smithsonian Institution; Lee Feinberg, optical telescope element manager for the Webb telescope at NASA's Goddard Space Flight Center; Erin Smith, Webb telescope deputy observatory project scientist at NASA Goddard; and Elliot Gruber, director of the National Postal Museum. In addition to selling the James Webb Space Telescope stamp at $12 per pane of 20, the USPS also has new, related collectibles available from its online store . Now shipping are two different envelopes stamped and postmarked for the first day of issue. Referred to as "first day covers" by philatelists, the two collectibles include either the official first-day-of-issue ink postmark or a digital color postmark. Both cancellations feature the stamp's name and the details of its issuance, as well as a hexagonal pattern representing the Webb's 21-foot-wide (6. 4-m) primary mirror. The digital color postmark fills the design with the "colors of the cosmos. " The Webb first day cover retails for $1. 15 each. The digital color postmark lists for $2. 00 each. Also available are uncut "press sheets" of six panes with or without die-cuts ($72 each) and a 15. 5 by 12. 5 inch (39. 4 by 31. 8 cm) print of the stamp art framed with one of the stamps ($39. 95). Collectors who were unable to be at the National Postal Museum on Thursday can also buy a "ceremony memento," with includes the event invitation (shaped to resemble the Webb Space Telescope's primary mirror) and program, as well one of the new stamp panes for $27. 95. The USPS will also respond to requests for the first-day-of-issue postmark though the mail. Beginning Thursday, the public has 120 days to buy and affix the James Webb Space Telescope stamp to an envelope of their choice, self-address or address it to others and then mail it inside a larger envelope to: FDOI — James Webb Space Telescope Stamp USPS Stamp Fulfillment Services 8300 NE Underground Drive, Suite 300 Kansas City, MO 64144-9900 After applying the first-day-of-issue postmark, the USPS will return the envelope through the mail. There is no charge for the postmark up to a quantity of 50, after which it is 5 cents per additional postmark. All requests must be postmarked by Jan. 6, 2023. Follow collectSPACE. com on F a cebook and on Twitter at @ collectSPACE . Copyright 2022 collectSPACE. com. All rights reserved. .
Source:
space
URL:
https://www.space.com/usps-james-webb-space-telescope-stamp-issued/
Prev Post
Next Post