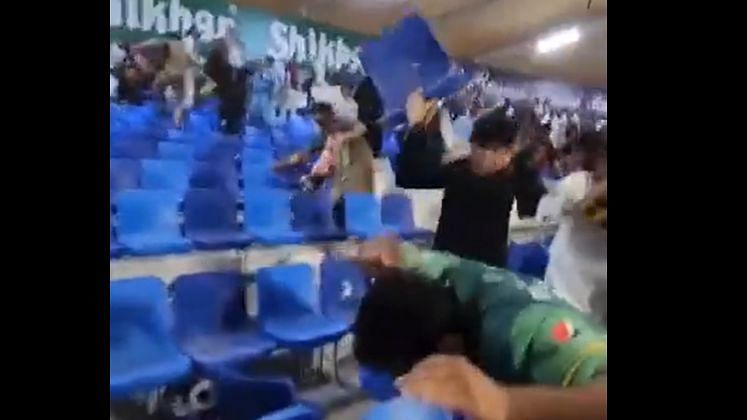 Sharjah: Clashes were reported between the supporters of Afghanistan and Pakistan after the latter won the cricket match in the ongoing Asia Cup 2022 in Sharjah on Wednesday. According to Mohsin Dawar who is a Member National Assembly from North Waziristan in Pakistan, Pakistan's decades-old "strategic depth policy" and "interventionist misadventures in Afghanistan" is the reason behind Afghans having problems with Pakistan. Dawar said the use of a cricket match as an "excuse" to hurl "racist abuse" against Afghanistan supporters is "shamelessness". This is just so disappointing to see. pic. twitter. com/qif9dNM3Qx— Mufaddal Vohra (@mufaddal_vohra) September 7, 2022 "Using a cricket match as an excuse to hurl racist abuse against Afghans is peak shamelessness. Pakistan's decades-old strategic depth policy and interventionist misadventures in Afghanistan are why Afghans have a problem with Pakistan. Introspect before belittling Afghans," tweeted Dawar who is also the Chairman Foreign Affairs Committee. The Afghan fans allegedly started damaging the Cricket Stadium. Afghan fans reportedly could not control their emotions and expressed their anger by hitting Pakistani fans in the stadium. Soon after the videos of the clashes went viral on social media, people were divided in their support for the sides. This is what Afghan fans are doing. This is what they've done in the past multiple times. This is a game and its supposed to be played and taken in the right spirit. @ShafiqStanikzai your crowd & your players both need to learn a few things if you guys want to grow in the sport. pic. twitter. com/rg57D0c7t8— Shoaib Akhtar (@shoaib100mph) September 7, 2022 A Pakistani journalist Hamza Azhar Salam questioned whether the Sharjah Police would identify the Afghan fans who "beat" the Pakistani fans. "Can @ShjPolice identify the Afghan fans who are mercilessly beating Pakistani fans on the streets of Sharjah?" Salam tweeted sharing a video of the clash. On the other side, a Twitter user, Mohit Sharma also shared the video and wrote Ye to bhagne ka mouka bhi ni de rhe Pakistanio ko (They are not even giving a chance to the Pakistanis to flee). "Ye to bhagne ka mouka bhi ni de rhe pakistanio ko #PakvsAfg," he tweeted. All the developments took place after Pakistan batter Naseem Shah's two back-to-back sixes in the first two balls off the final over undid brilliant bowling by Afghanistan throughout the innings, which secured a one-wicket win for Pakistan in a thrilling Super Four clash at the ongoing Asia Cup 2022 on Wednesday. Afghanistan was shown the exit door after posting just 129/6 on the board. However, they almost took their side towards a win but Naseem's two sixes in the last over sealed a win for Pakistan. Iftikhar Ahmed (30) and Shadab Khan (36) posted valuable contributions for Pakistan. A final between Sri Lanka and Pakistan is set. Meanwhile, violence took place on August 28 in UK's Leicester after India won the match against Pakistan in Asia Cup 2022. Various videos and reports have been circulating on social media about further attacks following last weekend's incident. "Gangs running riot and escalating attacks on Hindus. Innocent Hindus have been terrorized in their own properties, there have been attempts to stab and there has been rampant vandalism of Hindu properties," Rashami Samant, a human rights activist tweeted. "Trouble in Leicester, UK. Paki Muslims targeting Hindu households, desecrating religious symbols, using racist slurs (mushirks)," tweeted another user. .
Source:
freepressjournal
URL:
https://www.freepressjournal.in/sports/watch-clashes-erupt-between-fans-of-afghanistan-pakistan-after-asia-cup-2022-match
Prev Post
Next Post