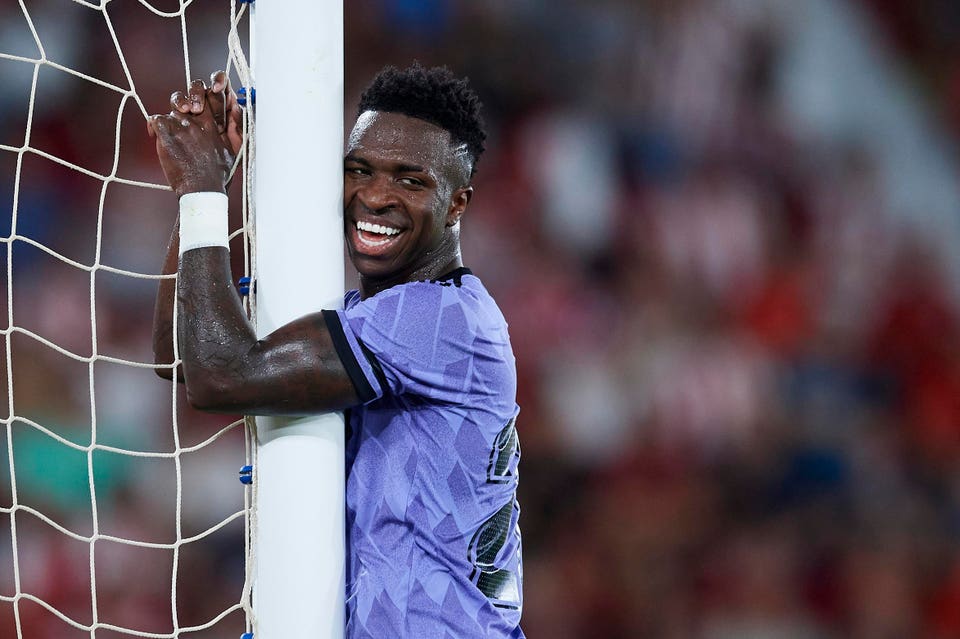 SportsMoney Wowing At Real Madrid, Vinícius Júnior Eclipses Neymar As Brazil’s Hope Henry Flynn Contributor Opinions expressed by Forbes Contributors are their own. I write about Spanish soccer's big clubs. Following New! Follow this author to stay notified about their latest stories. Got it! Sep 10, 2022, 12:10pm EDT | New! Click on the conversation bubble to join the conversation Got it! Share to Facebook Share to Twitter Share to Linkedin Vinícius has added goals and assists to his game after a slow start to life in Spain. NurPhoto via Getty Images Brazil loves a flair player, a poster boy, someone to hang its yellow and blue hopes on. And with the World Cup only weeks away, it seems to have cemented the perfect one—Vinícius Júnior: Real Madrid’s 22-year-old flying winger. Note, this is the man taking La Liga by storm and not fellow countryman Neymar, the 30-year-old who has shouldered the nation’s soccer expectations for so long. The world’s most expensive transfer doesn’t have quite the same pull as he used to, and for various reasons. Neymar is as much of a brand as a soccer player, with well over a dozen sponsorship ties and his own NR Sports company, which manages all his image rights. Being a long-term Paris Saint-Germain forward maximises this celebrity, with the club’s growing status as a fashion label transcending the sport itself. Going by the social media barometer, he is high on the interest scale, only trailing Cristiano Ronaldo and Lionel Messi in his global soccer following, per one report. The striker’s star appeal means he is a natural pin-up player. But in terms of ability, Vinícius is overtaking his countryman as Brazil’s top technician by driving much of Real’s relentless trophy success, despite not being the obvious choice. Come November and the big games for Brazil, he will lack Neymar’s long endorsement list but has what it takes to be even more dangerous on the pitch. Age is also a factor, with Neymar’s dynamic best arguably behind him rather than ahead. Apart from regular domestic trophies with PSG, he hasn’t taken it to the summit of European soccer and is yet to achieve World Cup stardom with Brazil. He is still to claim his first Copa América trophy too. MORE FOR YOU WWE Extreme Rules 2021 Results: Winners, News And Notes As Roman Reigns Beats The Demon The World’s Highest-Paid Soccer Players 2021: Manchester United’s Cristiano Ronaldo Reclaims Top Spot From PSG’s Lionel Messi The Good, Bad And Ugly From The Green Bay Packers’ Win Over The San Francisco 49ers Neymar recently gave an interview to DAZN , in which he spoke—often with one word—about some of the best players, including Messi, Ronaldo and Luis Suárez, with burgeoning talents Pedri, Eduardo Camavinga and Jude Bellingham included too. One absent name was Vinícius’, although he is arguably the most exceptional of the bunch. Neymar has scored seven Ligue 1 goals for PSG this campaign. LightRocket via Getty Images With trickery and, most importantly, the explosive pace that some youngsters have, no defender wants to face Vinícius at the moment. His link-up with Karim Benzema is smooth, and—with them in the team—Real always seem a nailed-on win even with the clock ticking down and needing goals to get over the line. He’s set to stay with Los Blancos, having secured Spanish citizenship —and with a lengthy new contract likely on the horizon. As for this season, Neymar’s seven goals make for a quick start, although PSG’s frequent dominance in France means it’s hard to read into this too much. Vinícius has also made a strong statement, continuing his excellent form from the last campaign, which ended with his clinching goal in the Champions League final against Liverpool. And for Brazil, both look poised to enter this year’s World Cup confidently. Neymar topped his country’s scoring charts in qualifying and was second overall, with eight strikes. Vinícius’s international pedigree dwarfs in comparison to his teammate, but his form leaves him in a prime position to help carry the team in Qatar. More to the point, though, Neymar needs all the help possible for the Selecão. Expectations have been so high for Neymar at the international level, and with more talents around him to share the responsibility, that will help the overall cause. Individually, he hasn’t been the difference alone. As it stands, there is no better player to share that weight than Vinícius. In the form of his life, he is dislodging his compatriot as its top prospect. Follow me on Twitter or LinkedIn . Henry Flynn Editorial Standards Print Reprints & Permissions.
Source:
forbes
URL:
https://www.forbes.com/sites/henryflynn/2022/09/10/wowing-at-real-madrid-vincius-jnior-eclipses-neymar-as-brazils-hope/
Prev Post
Next Post