WWE pays surprisingly poignant tribute to Queen Elizabeth II live on air: ‘She carried herself with dignity and grace’ 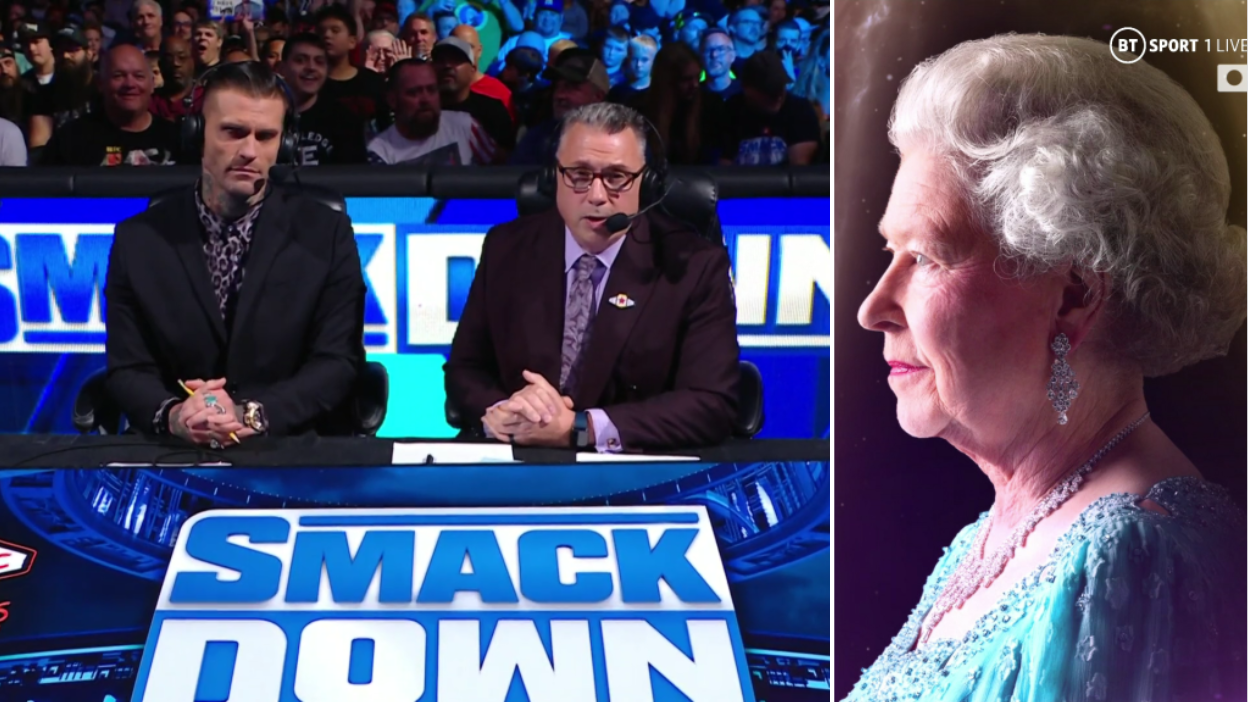 WWE paid a simple and poignant tribute to Queen Elizabeth II on SmackDown after her sad death this week aged 96 . During the wrestling giant’s weekly Friday night show, the blue brand’s commentary team of Michael Cole and Corey Graves – who is replacing Pat McAfee while he works on ESPN’s College GameDay – referenced the news and honoured the late monarch. Veteran broadcaster Cole said: ‘Ladies and gentlemen, the world lost a legend yesterday, a larger than life woman who was part of some massive moments in history over the past century but also carried herself with dignity and grace – Queen Elizabeth. ’ Graves added: ‘We at WWE would like to extend our condolences to the entire Royal Family and the millions whose lives she touched around the world. ’ The company also displayed a graphic with a photo of Her Majesty, in a touching and unexpected moment from the sports entertainment brand. Others in the wrestling world have paid tribute to the Queen following her death, including Norwich-born former WWE superstar Paige, who wrote: ‘RIP to our Queen Elizabeth’. Her Majesty Queen Elizabeth II has died after 70 years on the throne, with her death announced by Buckingham Palace on September 8, 2022. She died at the age of 96 at her home in Balmoral, with her son, the now King Charles, and daughter Princess Anne by her side. Follow Metro. co. uk's live blog for the latest updates, and sign Metro. co. uk's book of condolence to Her Majesty here. To view this video please enable JavaScript, and consider upgrading to a web browser that supports HTML5 video William Regal – a British legend who worked his way up through the Blackpool scene to become one of the country’s biggest wrestling exports in WWE before joining AEW earlier this year – also paid his respects. He tweeted: ‘Rest well my Queen. ’ Preston-born NXT commentator and retired wrestler Wade Barrett added: ‘A terribly sad day. Thank you, your Majesty. ’ And Olympic boxer turned AEW star Anthony Ogogo said: ‘My Queen 1926-2022. They just don’t make them like this anymore. It’s now time for you to finally rest. Thank you’. This morning, King Charles will be formally announced as the new monarch later today in a traditional ceremony as the Accession Council meets in St James’ Palace before a proclamation read from a balcony by a courtier. Cameras will witness the meeting, which is due to begin at 10am, opening it up to the public for the first time ever. Pat McAfee leaves WWE SmackDown as Triple H confirms commentator's exit Triple H gets another major WWE promotion weeks after taking over as head of creative The Simpsons showrunner reveals wildest 'prediction' that accidentally 'came true' Charles became King automatically when his mother died but tradition holds that the council must meet shortly after the death of a monarch to make it official. A full coronation ceremony is unlikely to happen until next summer as they are traditionally spaced out to allow an appropriate mourning period for the late monarch. .
Source:
metro
URL:
https://metro.co.uk/2022/09/10/wwe-pays-surprisingly-poignant-tribute-to-queen-elizabeth-ii-17342124/
Prev Post
Next Post