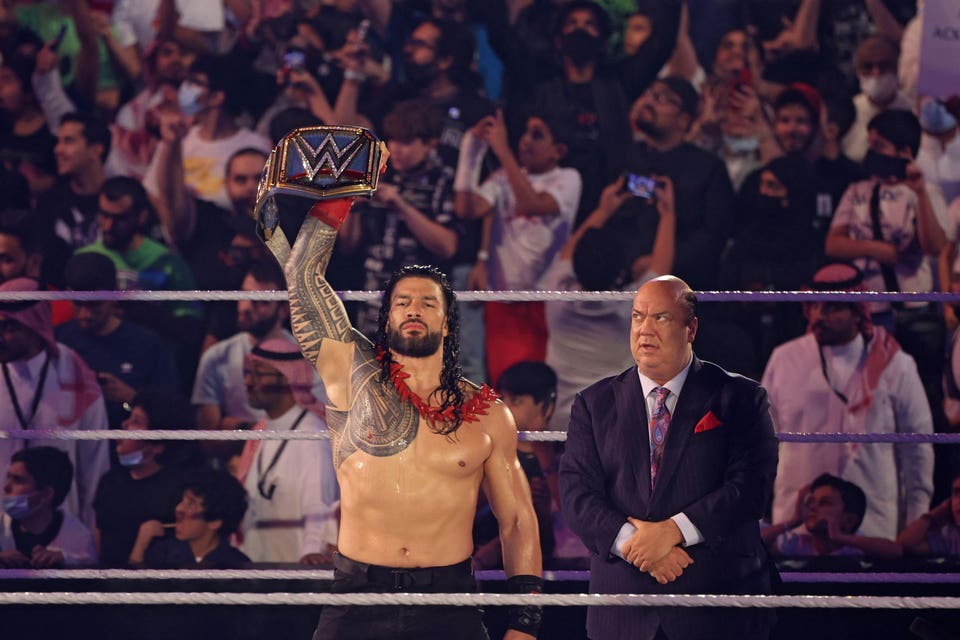 SportsMoney WWE Reportedly Planning Eventual Babyface Turn For Roman Reigns Blake Oestriecher Contributor Opinions expressed by Forbes Contributors are their own. Analyzing WWE, AEW and pro wrestling as a whole. Following New! Follow this author to stay notified about their latest stories. Got it! Sep 10, 2022, 08:48am EDT | New! Click on the conversation bubble to join the conversation Got it! Share to Facebook Share to Twitter Share to Linkedin Roman Reigns could remain WWE Champion well into 2023. (Credit: FAYEZ NURELDINE/AFP via Getty . . . [+] Images) AFP via Getty Images WWE has booked Roman Reigns as its unbeatable heel champion for more than two years, but the ultimate goal of his unprecedented reign is to transform “The Head of the Table” into a fan favorite. According to a report from WrestlingNews. co , Reigns is expected to hold onto the Undisputed WWE Universal Championship into 2023 in route to an eventual babyface turn: “WrestlingNews. co was told by someone familiar with the creative process that nothing has changed and there are still no plans for him to lose the title this year. ” The site added, “When Reigns turned heel in 2020, the plan at the time was for him to be the champion when he eventually wrestled The Rock and Vince McMahon wanted Reigns to retain the title and the idea was, and still is, for Reigns to become a top babyface. ” WWE’s ultimate goal is to have Reigns established as one of the greatest stars in company history and “elevate him to the level of someone like Hulk Hogan and Bruno Sammartino. ” Since turning heel in late 2020, Reigns has been on the best run of his career, and ironically enough, it was Reigns moving to the dark side that elevated him to his current position as pro wrestling’s clear No. 1 star and arguably its most respected and appreciated. MORE FROM FORBES Tony Khan Talks AEW All Out, CM Punk, ROH, More By Blake Oestriecher As has been the case with numerous major names in the past, Reigns badly needed a successful stint as an antagonist in order to be truly regarded as a legendary star. The ultimate goal—and a necessity—with many all-time greats was to let them be hated before they could be loved, and in the case of Reigns, this has worked out about as well as anyone in WWE ever could have hoped. MORE FOR YOU WWE Extreme Rules 2021 Results: Winners, News And Notes As Roman Reigns Beats The Demon The World’s Highest-Paid Soccer Players 2021: Manchester United’s Cristiano Ronaldo Reclaims Top Spot From PSG’s Lionel Messi The Good, Bad And Ugly From The Green Bay Packers’ Win Over The San Francisco 49ers The Wrestling Observer Newsletter’s Dave Meltzer (h/t Wrestling News ) echoed WrestlingNews. co’s report. According to Meltzer, there was a very simple explanation as to why Reigns did not drop the Undisputed title to Drew McIntyre at this month’s Clash at the Castle pay-per-view in Wales, despite the hometown hero crowd pop McIntyre undoubtedly would have received had he ended Reigns’ historic two-plus-year reign: WWE wants to make Reigns “a legend for this generation” and din’t want to end his reign for the sake of a one-off moment. The push of Reigns remains on the same path, even with Triple H taking control of WWE’s creative team following the departure of Vince McMahon. Reigns, once among the most loathed babyfaces in WWE history, has established himself as a megastar during his memorable run at champ, and he is virtually in a class of his own as WWE’s unquestioned top star. The massive push has been great for Reigns, but it has also presented a problem for WWE. The company has been unable to establish babyfaces who are near Reigns’ level in terms of overall performance, popularity and believability as WWE’s lone world champion. Because WWE decided to unify its top two titles at WrestleMania 38 earlier this year, there has been more pressure than ever on Reigns to deliver as its most marketable and recognizable star, even though he’s transitioned to a part-time role . WWE Raw viewership just hit a two-year high , and even though Reigns is appearing less frequently on WWE programming than ever before, the momentum WWE has gained with its Triple H-led booking and Reigns on top will give the company very little reason to take the title off Reigns anytime soon. There really shouldn’t be any rush to turn him babyface, though, either. Just over the past couple of weeks, WWE has added a few new wrinkles to Reigns’ storyline as the top star in The Bloodline, thanks to the inclusion of Sami Zayn and the call-up of The Usos’ younger brother Solo Sikoa. WWE can easily extend this angle well into 2023, at which point a potential blockbuster match between Reigns and The Rock could headline WrestleMania 39 in SoFi Stadium. From there—whether Reigns loses the title or not—WWE could book the downfall of Reigns and The Bloodline and do so in a way that ultimately leads to Reigns becoming a babyface again. Especially with Reigns assuming a part-time role and marquee stars like John Cena, Triple H and so many other legends become more appreciated and held in higher esteem the further they’ve gotten away from being a full-time star, Reigns is on the ideal trajectory toward being viewed as the respected legend WWE wants him to be. And at a time when WWE’s “special attraction” well has run pretty dry, Reigns eventually embracing the fans after an extended run as a heel is the best possible path for him at this stage of his career. Follow me on Twitter or LinkedIn . Blake Oestriecher Editorial Standards Print Reprints & Permissions.
Source:
forbes
URL:
https://www.forbes.com/sites/blakeoestriecher/2022/09/10/wwe-reportedly-planning-eventual-babyface-turn-for-roman-reigns/
Prev Post
Next Post